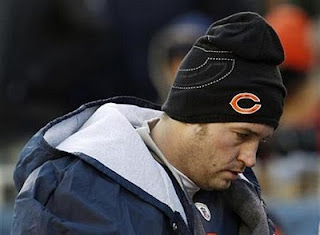 
The sports talk world is a buzzing after this past weekend’s NFL divisional playoff games where we saw Green Bay and Pittsburgh advance to the 45th Big Game (I think we can’t refer to it as its actual name which rhymes with Luper Toll). The buzz isn’t around the goal line stance of Pittsburgh or the 1st quarter of near perfection by Aaron Rodgers of the Packers, but like most hot topics in the sports talk world and one many Lakers fans are familiar with, it involves controversy surrounding a polarizing figure.


The topic that has the sports talk radio station phones ringing off the hook is the Jay Cutler knee injury that kept him out of the 2nd half of the pivotal NFC championship game leaving the Bears quarterbacking duties to a decrepit Todd Collins and an undrafted and unproven rookie in Caleb Hanie. To place this in perspective, it’s like having a choice of replacing an injured Kobe Bryant in Game 7 of a conference finals game with either Morris Petterson or Devin Ebanks.

In that situation, most would say that a one legged Kobe would still be more effective and trustworthy than either of the aforementioned players. That is what has the Chicago fanbase so irate, that considering the quality of players that are behind Cutler and the gravity of the moment, how he could not continue to play despite the injury?

Many in the sports world are saying that Jay Cutler lacks toughness, including the Chicago fan base, former and current players, media pundits and pretty much every group imaginable outside of his own team.

The Lakers have had their own moments where one of their players had their toughness or severity of their injury questioned:

Pau Gasol’s toughness is still questioned to this day.

Shaquille O'Neal had long been criticized for delaying surgery and not putting in the work in rehab to get on the court quicker.

Andrew Bynum was questioned just this past off season for delaying surgery to attend the World Cup. Also, the times he has been injured his recovery period has always exceeded the initial expected return date.

While we can follow the lead of the national media at Lakersnation and focus on negativity by reliving these moments, I think it would be better served to review the Lakers history of the polar opposite to what Jay Cutler is being accused of this week.

This brings to mind the absolutely greatest examples of toughness in the biggest games in Laker history. I want to focus on the times where despite injury and excruciating pain, the player willed himself back on the court to finish out a game or a series in the interest of the team and winning.

These are the greatest moments of toughness in Laker history that come to mind. 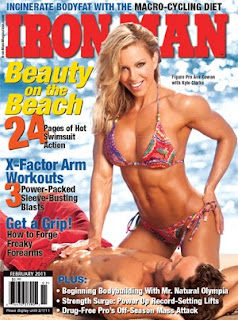 February issue has a familiar beauty-on-the-beach theme. That’s right, our swimsuit issue returns, back by popular demand. It’s a feast for your eyes and fuel for your motivation as gorgeous, fit gals enjoy the sand and surf with a few muscular props (that’d be bodybuilder dudes). Plus, David Young talks with Scott Mendelson and Eric Serrano, M.D., aboutmacronutrient cycling, a sound system for getting shredded. You’ll also find bodybuilderDavid Yersky’s direct-hit delt program X-Factor Arm workouts, and more on the amazing 4X mass-building method. Find the February IRON MAN on newsstands the first week of January.