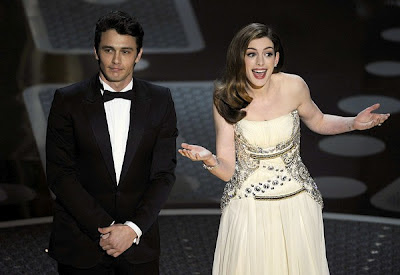 Whenever you have a former host introducing a tribute to another long dead host of the Oscars and would take either to replace current hosts James Franco and Anne Hathaway you know there's a problem. Franco appeared stoned and disconnected while Hathaway was bubbly but awkward. To be fair, the material they had to work with didn't make their jobs any easier. Along with the predictable out come of the major categories just set the evening on snooze.

All in all a nice production with a preditable outcome but it's always good to see the beautiful people get together to award themselves golden statues. Maybe next year they'll get Ricky Gervais to host. Maybe.

Actor in a Leading Role: Colin Firth, The King's Speech

Actor in a Supporting Role: Christian Bale, The Fighter

Actress in a Supporting Role: Melissa Leo, The Fighter

After months of rumors, meetings, deals, broken deals, and more and more speculation, Denver trades Carmelo Anthony to the Knicks and leaves New York's cupboard bare. Sure, Anthony gives the Knicks a dynamic scorer able to score from virtually anywhere on the floor and as clutch as any player in the league who's going to support team defensively? Considering what they got along with Melo, the Knicks will be hard pressed to stop gritty, hard-nosed teams like the Boston Celtics and Chicago Bulls. Not to mention the super talented and emerging defensive stalwart Miami Heat. They're going to have to build around Amare and Carmelo and hopefully for overly hyped Knick fans they find a defensive identity in a couple of years to truly become a relevant force in the East.
Posted by Enrique Rea at 2/22/2011 03:34:00 PM No comments:

"Wonder Woman" has it's Leading Lady but Does it Have a Chance? "Adrianne Palicki will star in the title role of “Wonder Woman,” a new series pilot from David E. Kelley."

Now the above statement, straight from Wonder Woman's own Facebook page (yes, that's right), should be glorious news to comic book fans. However then I read this:
"The series pilot is a reinvention of the iconic DC Comics title in which Wonder Woman – a.k.a. Diana Prince – is a vigilante crime fighter in Los Angeles but also a successful corporate executive and a modern woman trying to balance... all of the elements of her extraordinary life."

What worries me the most is that the character will be vastly different from the one I've known. Now, don't get me wrong, I'm not a stubborn and unreasonable fan boy. Updating the Amazon makes sense to reintroduce her to a new and younger audience. You want to change the costume? Fine. You want to revamp her backstory and make her a corporate exec? Go ahead. You want an actress that's an acceptable instead of ideal candidate? Okay. The problem is will the creator of Ally McBeal turn this "vigilante" into a dramedy?

I'm hoping we're not seeing this balancing act they speak of to include dancing babies or stereotypical office buddies trying to interfere with Diana's love life. Wonder Woman is an Amazon and while I think Palicki can be made to look the part will the producers respect the origin and show the Greek goddess as kick-ass as she ought to be?

The onus is on Kelley to balance the iconic hero's strengths through honoring her warrior princess ways with making her relateable to viewers today. As long as he avoids the campiness and zany office politics of the shows on his resume then there's a chance.
Posted by Enrique Rea at 2/18/2011 03:21:00 PM No comments:

Players That Can be Had for Lakers’ $5 Million Trade Exception 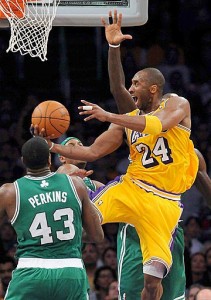 
Laker trade talk 2011 is heating up and Chris Broussard of ESPN is the one fanning the flames. One of the hottest trade rumors being bandied about by Broussard is the Denver Nuggets trading NBA All-Star Carmelo Anthony for Laker center Andrew Bynum. The proposed trade has not be substantiated by anybody in the Laker brass and the local Laker beat writers such as Kevin Ding of the O.C. Register are reporting that no plans to move Bynum are in the works for the Lakers.


Every year around this time trade rumors ranging from reasonable to completely ridiculous run rampant on sports TV shows, sports talk radio, and especially and probably most irresponsibly, on the internet. All it takes is a Twitter account, an imagination and an unnamed source to get one of these rumors to go viral.

What we usually end up with once we pass the trading deadline and all of the dust settles is either inaction or minimal player movement involving some of the lesser known players in the NBA. Major blockbuster trades are just too hard to assemble and complete with all the complexities of the cap, trading guidelines and negotiation process; therefore, we seldom see these big trades come to fruition.

The Lakers currently stand half a game behind Dallas for 2nd in the West and are just one modest winning streak away from catching the other teams ahead of them outside of San Antonio; for this reason, and because of the rarity of blockbuster trades, I don’t see a major shake up with the Laker current roster prior to the deadline.

A smaller and more realistic acquisition can be had by the Lakers by them utilizing the $5.48 million dollar trade exception they acquired in the Sasha Vujacic for Joe Smith trade earlier this year. They wouldn’t need to involve a third or fourth team to complete some elaborate trade. It would simply take another team to want to unload a player’s contract straight up for the $5.48 million trade exception from the Lakers. The other team is free of the commitment for their player, will save money, and the Lakers get a piece that will hopefully fit nicely in their championship puzzle.

Here are a list of players that make no more than S5.58 million (which is the most that a player can make to qualify for the trade exception) this season and have at least one more year on their contract making them an attractive contract to dump.

Also, I named players that can help with some of the Lakers areas of weakness such as athleticism, outside shooting, guarding the quick points and/or lack of youthfulness.