The 2012 Spartantown Comic Book of the Year Award Goes to... 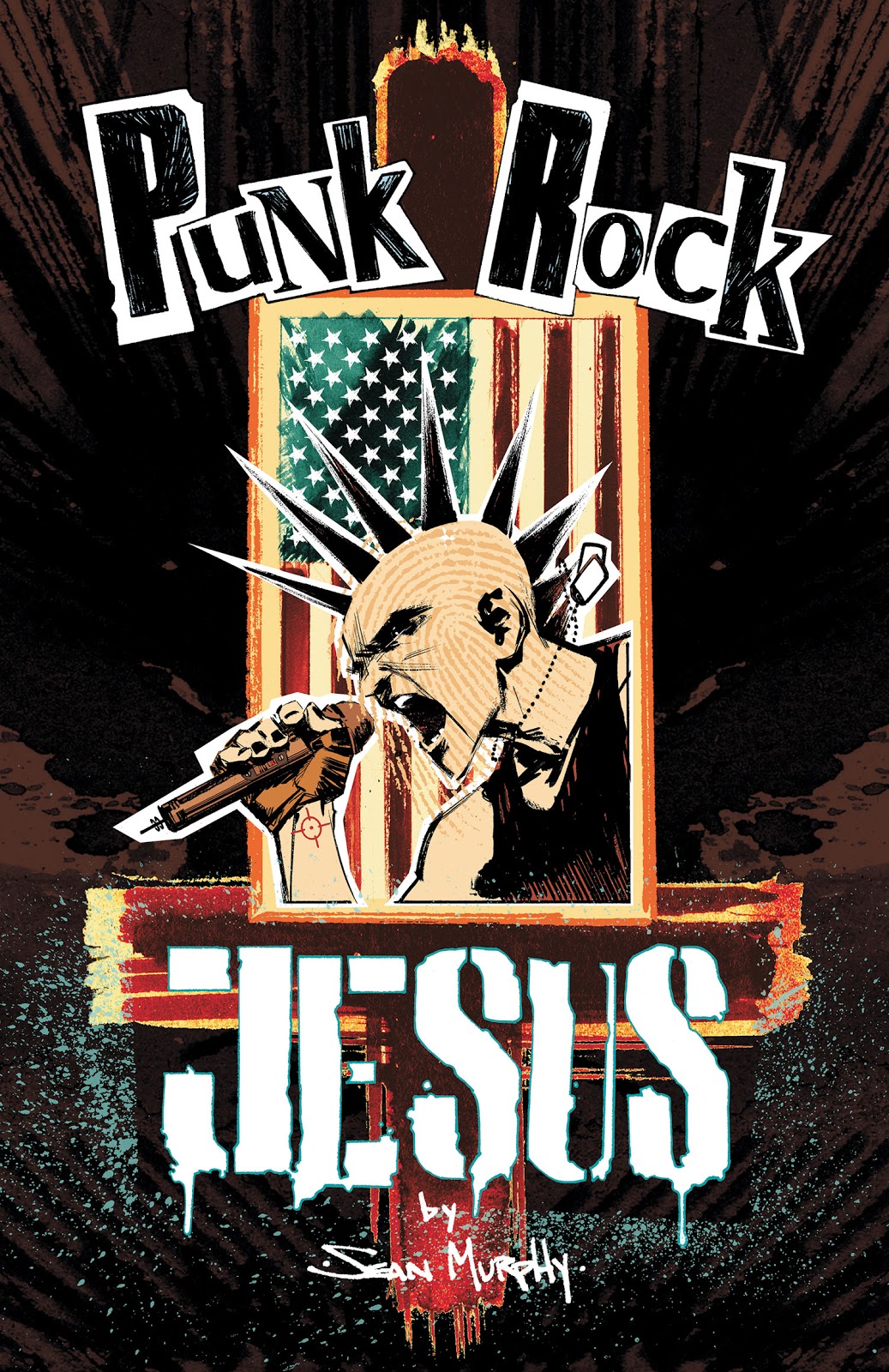 The newest reality show hit has the unlikeliest celebrity of all in this new black and white miniseries from writer/artist Sean Murphy (JOE THE BARBARIAN, Off Road)! J2, the TV series starring a clone of Jesus Christ, causes chaos across a near-future United States in PUNK ROCK JESUS, a new miniseries written and drawn by Sean Murphy, the acclaimed illustrator of JOE THE BARBARIAN and AMERICAN VAMPIRE: SURVIVAL OF THE FITTEST. J2 causes outrage and adulation. Religious zealots either love or hate the show, angry politicians worry about its influence on the nation, and members of the scientific community fear the implications of cloning a human being at all – let alone the Son of God. And what effect will this all have on Gwen, the young woman who is selected, through an American Idol-style process, to be the mother of the new Messiah? All this leads to the hiring of Thomas McKael, the clone’s bodyguard and a former IRA operative with a turbulent past who must protect the new Messiah – a baby who captivates the world, but grows up to become an angry teenager. 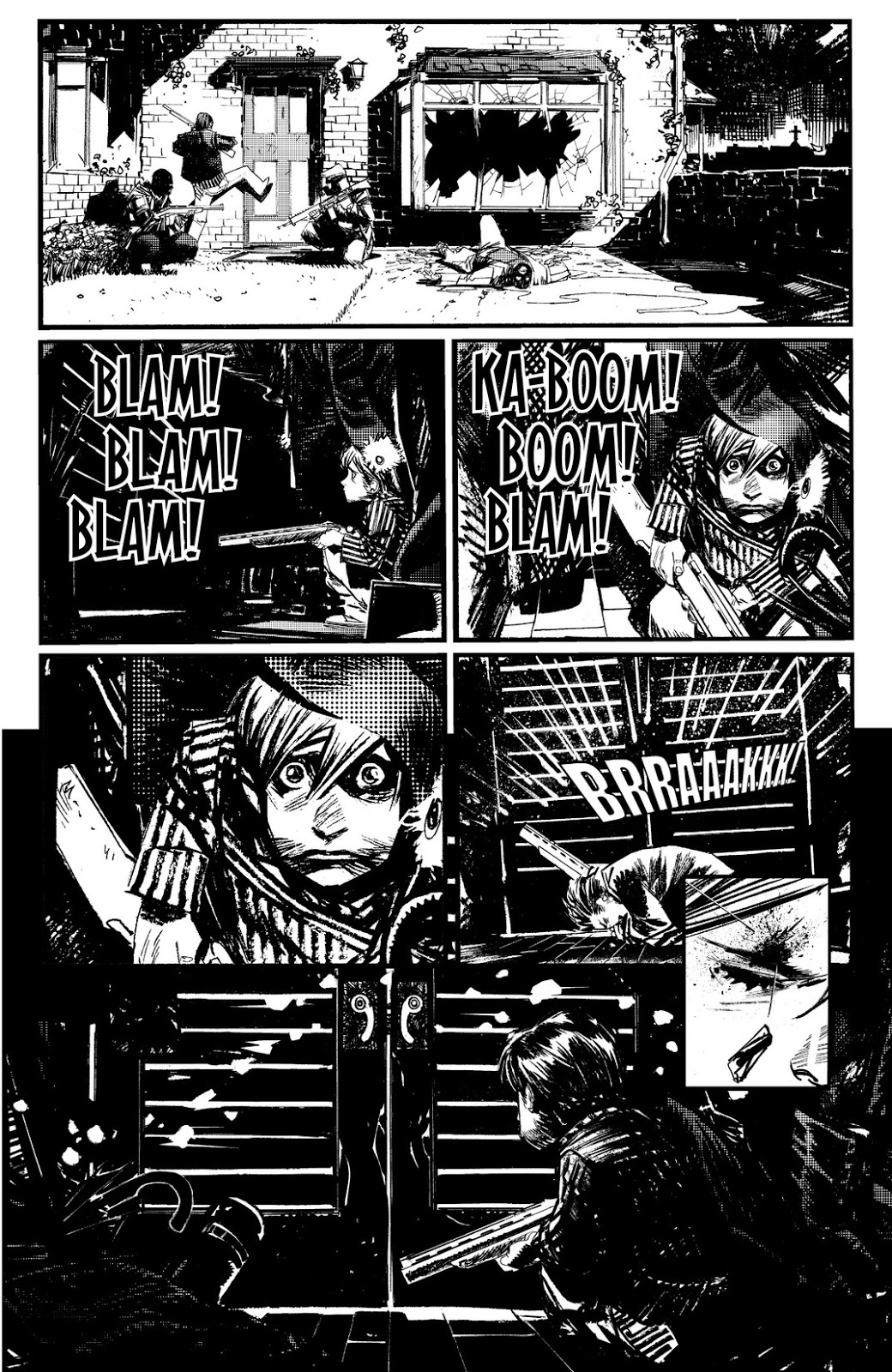 In a year with some notable triumphs in art and storytelling, few comic book titles could match the shear brazen attempt of tackling the controversial issues of infanticide, reality television, religious fanaticism, corporate greed, human cloning, terrorism, and genetic tampering like Vertigo's 'Punk Rock Jesus' by Sean Murphy. The black and white limited series deftly interwove these topics in a compelling and unflinching look at how society is manipulated and ultimately awakened through rebellion much like the punk music this supposed clone of Jesus discovers and embraces.

Sean Murphy's pencils offer an exciting pace panel after panel, sometimes in splash pages, but overall the look is lean and mean with an emotional range found from few writer-artists. From the violent back story of ex-IRA operative head of security Thomas McKael to the mental breakdown of surrogate birth mother, Gwen Fairling, Murphy doesn't shy away from exposing these ugly events with great execution and skill. In the midst of the media frenzy for the 'J2' reality show covering the birth and life of the cloned Messiah, Murphy injects thoughtful moments of real insight for his characters that give the story real emotional weight and substance. The wildest moments come from the militant actions of religious fundamentalists who call themselves the New American Christians who want to free the new Christ and his mother from the island where he was born. The action is well laid out and smoothly displayed from scene to scene.

Meanwhile, baby Jesus grows up and eventually discovers through heartbreaking circumstances that the weight of being the clone of the Son of God, a media phenomenon, a medical research oddity, and a young kid is too much to bear. He ultimately rebels against the corporation behind J2 and his faith altogether. He fully embraces punk rock music and leads his band, the Flak Jackets, to further his message of new found atheism to the world. The message resonates and a punk army is born which clashes with the NAC. All this leading to an exciting conclusion (not published of this writing) in the final #6 issue. 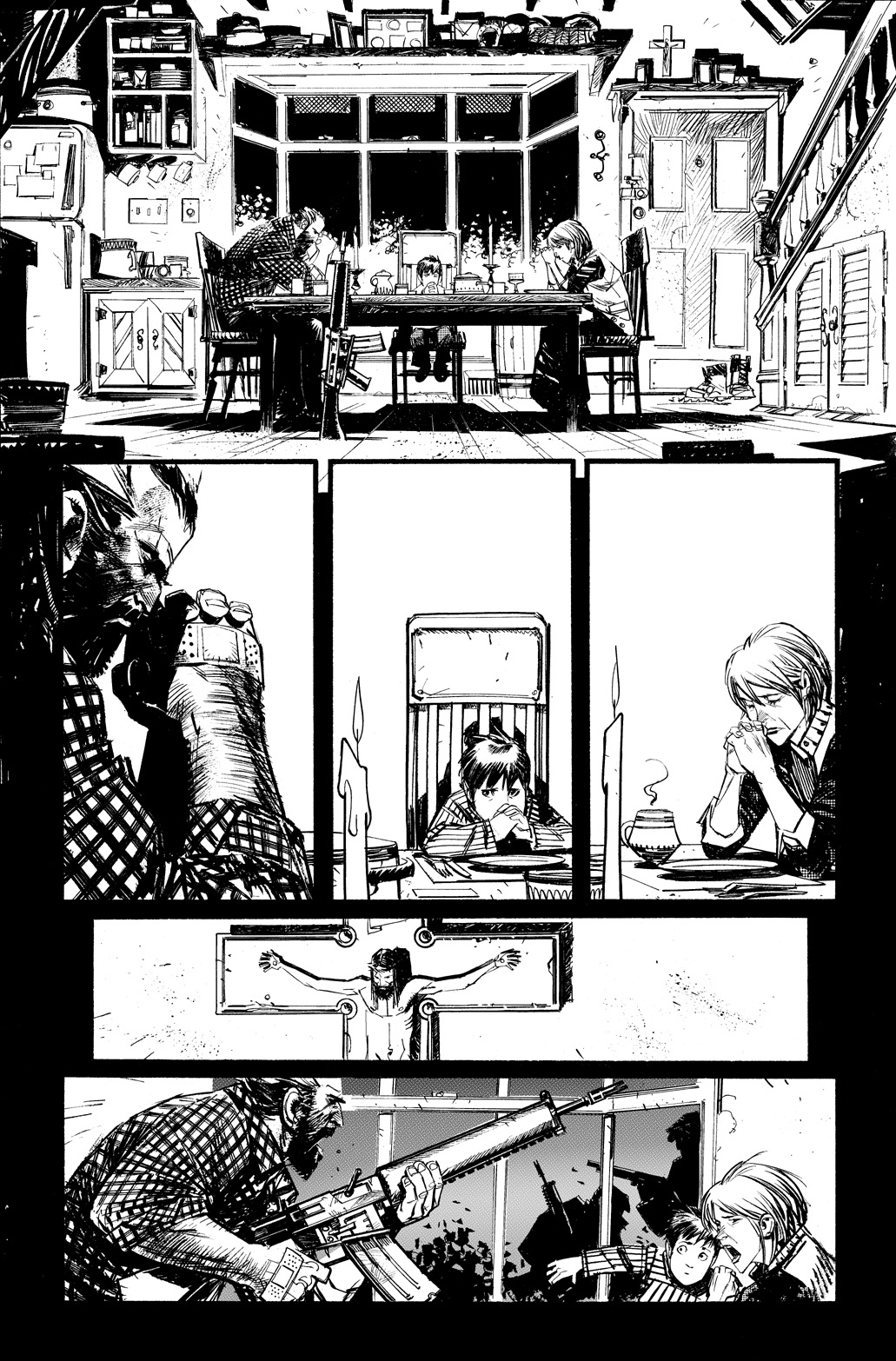 As much as the story revolves around the cloned Christ, 'Punk Rock Jesus', is also about McKael's journey from terrorist to guardian. A fine-tuned killing machine now made to guard the cloned Savior, McKael also serves as a father figure to him. He is continually tested both by the danger his job demands and the chaos surrounding the young Christ. Murphy has made McKael a central figure and a sympathetic one.

Ultimately, 'Punk Rock Jesus' is an examination of society's hunger for staged television entertainment, the hypocrisy of institutions like religion, the unethical greed of corporations, the ambiguous morality of science and the rebellious awakening of youth . Under less competent hands this story could have been heavy-handed and preachy. It could have read like a cheap anti-establishment manifesto. Instead Sean Murphy competently ties these topics into a enthralling and exciting story with characters that elicit real life concepts like love, fear, hate, despair, selfishness, etc. It reminded me of Alan Moore's work on 'Watchmen'. Moore also provided an allegory for our times and while not as expansive as that PRJ is a concise shot of adrenaline to an industry that sometimes is fearful of taboo constructs. 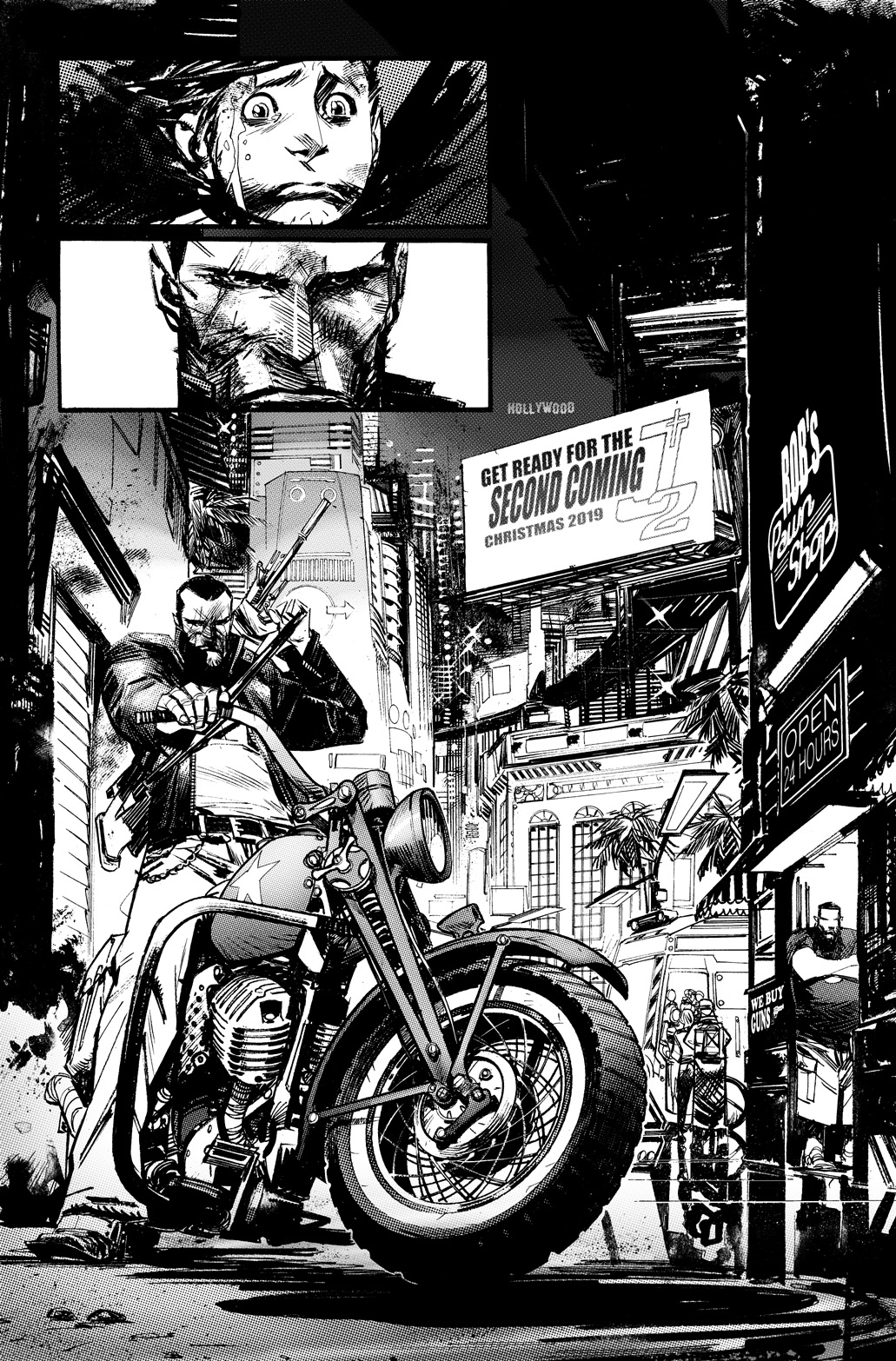 In the end, 'Punk Rock Jesus' was chosen over the exceptional work by Scott Snyder and Frank Capullo on DC's 'Batman' and the epic sci-fi tale from Brian K. Vaughn and Fiona Staples on Image's 'Saga' for it's fearlessness. Not only did Murphy's work have an urgency and purpose behind every page but it did so in black and white. The starkness and lack of color in the book matched the starkness of a future world where such things as the human cloning of Jesus Christ by a corporation could take place for the entertainment of television viewers. It was the 'Truman Show' as directed by Oliver Stone. This book is not a vehicle for  sensationalism but instead it's an indictment of our current state of affairs as a society. A mirror held up to the contrivances of our world where manipulation occurs in all facets of our lives. Sean Murphy delivered a thought-provoking and ground-breaking story to comic book readers in 2012. 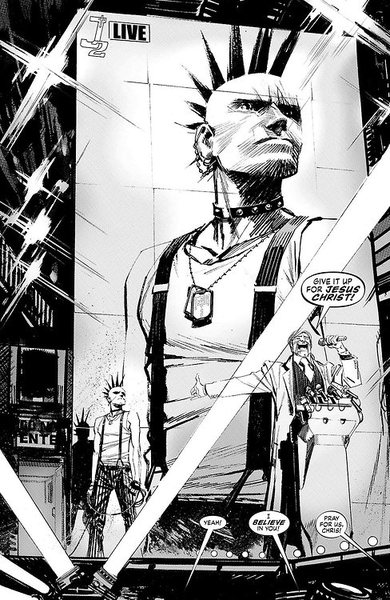 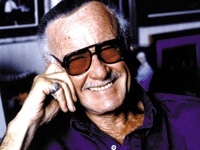 
Known to millions as the man whose Super Heroes propelled Marvel Comics to its preeminent position in the comicbook industry, Stan Lee’s famous co-creations include Spider-Man, The Incredible Hulk, X-Men, The Fantastic Four, Iron Man, Daredevil, The Avengers, Silver Surfer and Dr. Strange among many others. Lee first became publisher of Marvel Comics in 1972 and is presently the Chairman Emeritus of Marvel Enterprises, Inc. and a member of the Editorial Board of Marvel Comics. In 1977, he introduced Spider-Man as a syndicated newspaper strip that went on to become the most successful of all syndicated adventure strips. Spider-Man now appears in more than 500 newspapers worldwide — making it the longest running of all Super Hero strips.

Without question, Stan ‘the Man’ Lee has exerted more influence over the comicbook industry than anyone in history. He created or co-created 90 percent of Marvel’s recognized characters, which have been successfully licensed and marketed since 1965. The numbers are staggering — more than 2 billion of his comicbooks have been published in 75 countries and in 25 languages. In Europe alone, Stan Lee’s name appears on over 35 million comics annually. Each year, X-Men sells more than 13 million copies.

In 1981 Stan Lee transformed his Spider-Man and Hulk creations into Saturday morning and syndicated television cartoons. When Marvel Comics and Marvel Productions were acquired by New World Entertainment in 1986, Stan’s horizons expanded even further, giving him the opportunity to become more deeply involved in the creation and development of filmed projects for both the big and small screen. He supervised such diverse animated series as X-Men, Spider-Man and The Hulk. To date, Stan’s characters have populated over 24 separate television series, all of which continue in syndication around the world.

Stan Lee’s admirers are not limited to the younger generation — his avowed fans include Presidents (Ronald Reagan once said he started every day reading Spider-Man comics and George Bush, in presenting Stan with a Medal of the Arts,  praised him for encouraging and assisting “millions of young people to broaden their own imaginations”) and media titans (Steven Spielberg once explained that “Stan and I do the same thing. Only my pictures move.”) and even his competitors (“Most of my generation of writers learned our craft from or through Stan Lee. He’s an incredible part of the business,” said Paul Levitz of DC Comics).

Now, as he enters the 21st Century, Stan Lee is broadening his horizons with his new company, “POW! Entertainment” where Stan is currently developing entirely new franchises for film and television while still proudly cherishing the title of Marvel’s Chairman Emeritus. 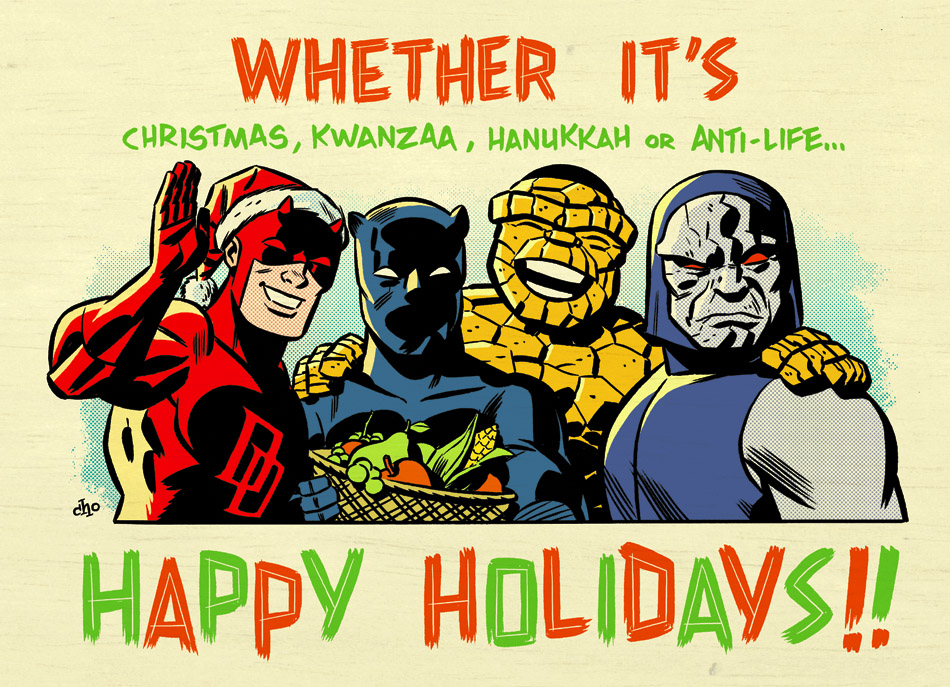 Wishing you all the best this holiday season and the fortune of kings in the coming year. Thank you for visiting Spartantown throughout 2012. Let us celebrate in love and harmony!
Posted by Enrique Rea at 12/22/2012 05:00:00 AM No comments:


We invited some YouTubers to star in a mash-up of culturally defining moments of 2012. Can you spot all the references?

Warner Bros. finally released a full length movie trailer for the highly anticipated Zack Snyder-directed, Christopher Nolan-produced Superman movie, 'Man of Steel'. Now with more footage the movie does appear darker and more serious than previous Superman films. There looks to be plenty of action and a first look of Michael Shannon as General Zod. Things look promising but we need to see more before gauging the movie's prospects. So far so good.

The Joker, Bane and Two-Face form a K-Pop Band?

We are admittedly not up to date on Korean pop-music but the alternative hip-hop group from Seoul, Epik High, got our attention when they took their performance at the 2012 Mnet Asian Music Awards to Arkham Asylum (2:06 mark). Dressed as the Joker, Bane and Two-Face, the members of Epik High, looked pretty sharp and committed to bringing Batman's rogue gallery to the musical stage. Kudos to Bane for singing through that mask.

I knew it was inevitable. It seems the clever folks at Screen Junkies got a ton of requests to make a brutally 'Honest Trailer' of 'The Dark Knight Rises'. After we featured their trailer for 'Avengers' we knew it was only a matter of time before the Batman got his. I loved the movie and I'm a huge Batman fan but I know there were some issues that have been exhausted to this point. I've had to defend them as best I could. Now this trailer brings those criticisms all flooding back the week the movie is released on DVD and Blu-ray. Enjoy!
Posted by Enrique Rea at 12/05/2012 10:25:00 AM No comments:


It's not officially the start of the holiday season until Thanksgiving is over, Black Friday sales dominate the malls and DMX sings a classic Christmas tune? Yep, the rapper broke it down a Capella at a radio station and did a fine job. Check out the video above and since it went viral there are new versions including the one below where the audio was matched to the original kid's movie. Enjoy! 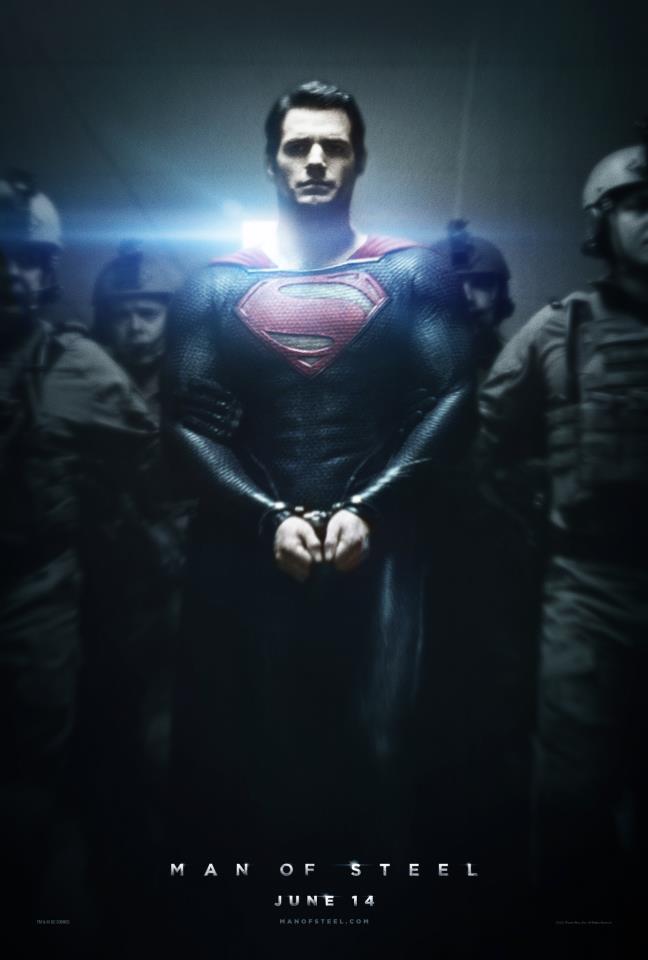 Finally, something fresh and new from the folks at Warners Bros. about the upcoming Superman film, 'Man of Steel'. The dark new poster has Supes in handcuffs. Very curious. We hope to learn more soon as soon as an actual full length trailer is released. Reports have one coming during previews of the upcoming 'The Hobbit' release on December 14. I want to see more and get a better sense of what this "more realistic" and darker Superman movie is all about. Fingers crossed.
Posted by Enrique Rea at 12/03/2012 12:30:00 PM No comments: