2015 Could Have Too Many Blockbuster Movies 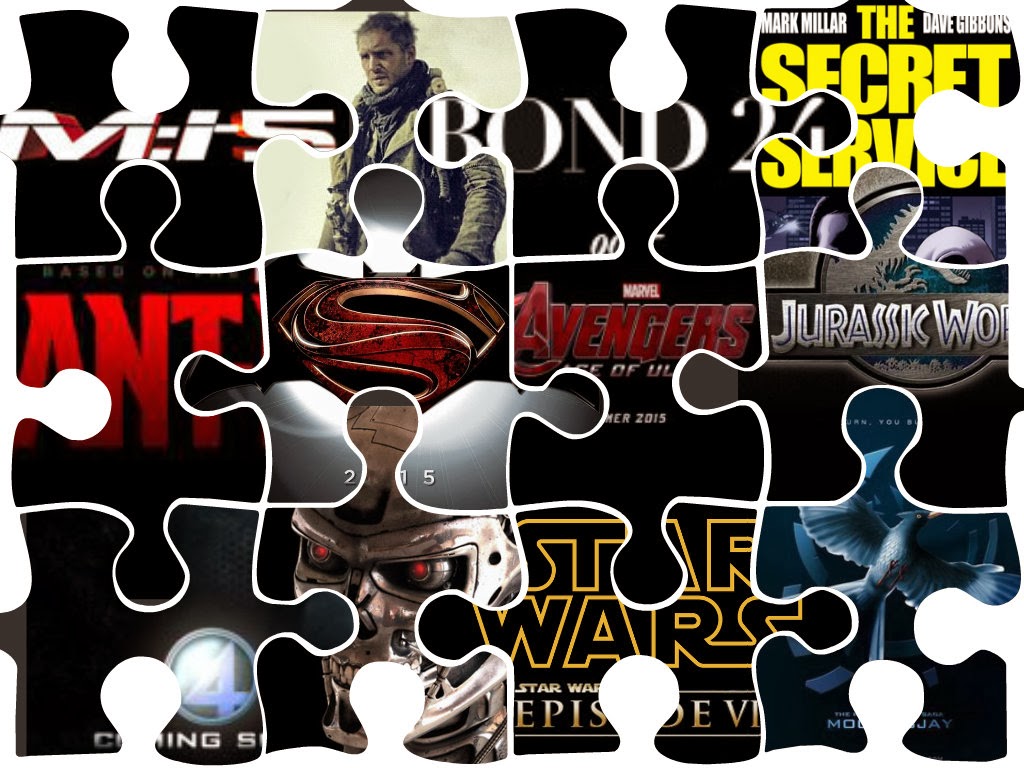 If you love going to the movies you may end up going broke in 2015. There are potentially double-digit blockbusters vying for box office supremacy that year and that's not counting popular animated fare like Despicable Me Minions, Kung-Fu Panda 3, The Smurfs 3, Alvin and the Chipmunks 4 among others. The bulk of these tent-pole movies as usual are sequels to other hits. Star Wars, Man of Steel, Avengers, Terminator, Hunger Games, Jurassic Park, James Bond, Mad Max, Mission Impossible, are all represented with new chapters. Some are more anticipated than others. Prometheus 2, Snow White and the Huntsman 2 anyone? How can fans keep up?

Admittedly, not all of these releases are set in stone and could change at any time. A studio executive somewhere may want to save his job and move their movie to a year where the latest Star Wars or Avengers opus isn't premiering. The timing is fine for smaller movies like  Susan Cooper starring Melissa McCarthy because she's highly bankable and her comedy provides a great alternative to all the superhero action going on in May. The comic book based spy thriller, The Secret Service, is avoiding summer altogether and could be a hit in a soft month like March. Disney and Kenneth Branagh have a live-action Cinderella also coming in March starring Cate Blanchett.

Unlike the sure-fire hits (more on those later), once popular franchise films are returning with new sequels to theaters in 2015. Jurassic Park was a colossal success in 1993 and even though the two subsequent sequels didn't equal its numbers they were still highly profitable. The last one came out in 2001 so the question is does the public still have a desire to see a dinosaur movie? Sandwiched between the release of 'Avengers 2' and the Man of Steel sequel 'Batman vs. Superman', Jurassic World will have to distinguish itself, give people something new and exciting if it wants to get their share of the box office pie that summer.

The same can be said for the new Mad Max: Fury Road movie starring Tom Hardy. However, you have to go back to 1985 to find the last time the franchise that helped make Mel Gibson famous was relevant. This will introduce the post-apocalyptic road warrior to a whole new generation of moviegoers. Technically, it's a prequel to the events of the second movie in the original trilogy, The Road Warrior, but for all intents and purposes it is a completely new movie and character to audiences in 2015. Not only does the movie have to attract new fans it will have to do it a week after the 'Avengers' sequel is released. Good luck.

Another franchise that won't die is the Terminator saga. Now going on its fifth incarnation Terminator 5 is looking to turn around a franchise that's had to depend on foreign sales to turn a profit the last two times out. Little is known as far as plot details but Arnold Schwarzenegger is reportedly returning with rumors of Dwayne 'The Rock' Johnson also joining the cast. It too premieres between 'Avengers' and 'BvsS'.

The films with the most question marks are the other comic book and video game based features. The least of all is Ant-Man which is being produced by Marvel Studios and even though it's an obscure character it's hard to bet against the studio on a hot streak (Iron Man 1-3, Thor 1-2, Captain America, Avengers). The other Marvel product not being made by Marvel is the next attempt at the Fantastic Four. The franchise isn't a complete flop for 20th Century Fox as they've seen a modest return for the last two features but it's no where near the success either critically or monetarily as the Marvel Studio offerings. They hope the third time's the charm with a whole new cast and will also be part of the X-Men cinematic universe.

Movies based on video games have not done very well but in 2015 we'll see two more trying to change that in Assassin's Creed and WarCraft. They are immensely popular and hope they can transcend some of that fandom to movie tickets.

Now to the best bets, the no-brainers, the movies big enough to make up for the crappy studio losers of the year. The most anticipated movies are Avengers: Age of Ultron, Batman vs Superman, Star Wars Episode VII, and Hunger Games: Mockingjay Part 2. These are the ones fans will be lining up for, viewing multiple times, and blogging about incessantly. These will also be the most scrutinized by their respective fanbases. Especially the new Star Wars movie with J.J. Abrams at the helm. We'll have to wait and see if the franchise can shake off the stink of Jar Jar Binks. Despite the internet rage of Ben Affleck as Batman the Man of Steel sequel should still bring in crowds of comic book fans. 'Avengers' and 'Hunger Games' fans are rabid and should make them top 5 money makers for the year. Studios can rest easy with these offerings barring any casting or production fiascos.

Other good bets should be the newest James Bond and Mission Impossible movies. Perhaps not the huge money makers considering the crowded field but usually perform very well.

It is a jam-packed year for movie entertainment and who knows if there'll be enough audience to go around. There will undoubtedly be some underperformers but if you are a fan of superheroes, sci-fi or action you'll have your pick in 2015.