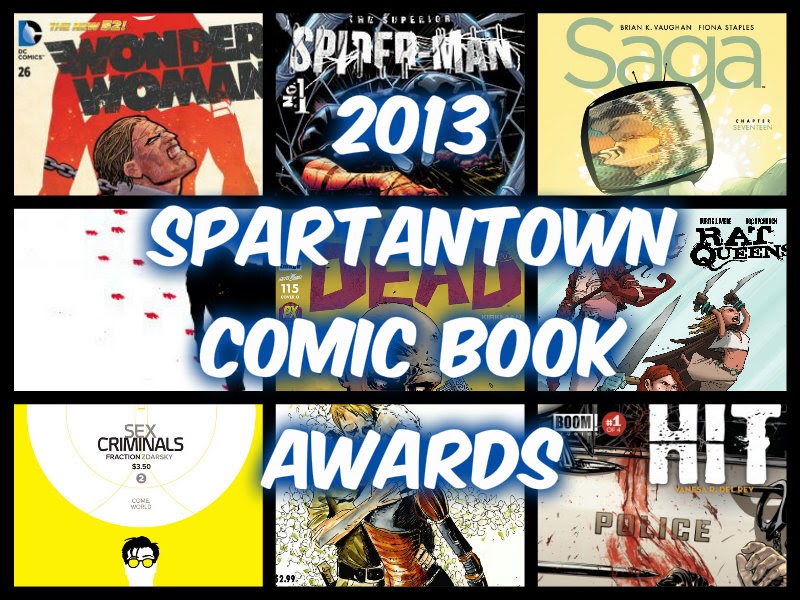 This year has been tremendous for the comic book industry but not just financially but creatively as well. There has been some consistently great reads as well as new titles that caught fire late in the year. Most of the best comics are creator owned and independently published. Creators free from the creative shackles of corporate comics are noticeably more passionate in their writing and drawing. That's not to say the Big Two don't produce quality products, they do, but the emphasis relies heavily on the latest epic crossover event that will force readers to buy titles they wouldn't normally to keep track of the bigger plot and prop up sales for those lagging books. They keep happening because evidently they work! Sales were up this year and Marvel's epic events (Age of Ultron, Battle of the Atom) were partly responsible. DC Comics had theirs of course (Forever Evil, Death of the Family, Batman: Zero Year, Trinity War) and despite some gimmicks (Villains Month 3D covers) still saw an uptick in sales too. Overall, a solid year for an industry once thought to be on the decline. Now's the time to look back and celebrate the best the medium had to offer.

This "Best of.." list will feature many books as opposed to one overall title because art is subjective and luckily for readers there are many great titles to choose from. Some other categories will feature one winner. Results are based on books I've actually read and won't be a comprehensive list because I'm sure there are great books I missed. I rarely get advance copies of comics to preview or review so I walk in to my local comic book store like everyone else and pick up my pull list plus whatever else I find interesting. I hope you find these books interesting too if you haven't already picked them up. Let's get started with the Best of 2013:


PUBLISHER OF THE YEAR
Image Comics

With a murderer's row of the industry's top talent, Image Comics, offers comics of the highest quality available. Titles like 'Saga', 'The Walking Dead', 'Fatale', 'Sex Criminals', 'East of West', 'Invincible', 'Lazarus', and many more have cemented Image's place as a haven for some of the best creators in comics.

ARTIST OF THE YEAR
Jae Lee

There are many artists who continue to impress issue after issue and there are no losers when you mention wonderful people like Fiona Staples (Saga), Greg Capullo (Batman), David Aja (Hawkeye) but the reason Jae Lee is the Artist of the Year was because of the jaw dropping work he did on Batman/Superman. Almost any panel can be framed for posterity to be cherished. The other-worldly artistic flair of sequential paintings gave the Earth 2 setting the mystical feel it was looking for.

WRITER OF THE YEAR
Matt Fraction

Sometimes being one of the best writers in comics also makes you one of the most sought after. That is certainly the case with Matt Fraction who besides writing the critically acclaimed Hawkeye for Marvel, as well as some short lived Fantastic Four titles, he also found time to write Satellite Sam and Sex Criminals for Image. Criminals being one of the best new books this year to boot. His ground-breaking work on the 'Pizza Dog' issue of Hawkeye with artist David Aja transcended the medium with the creativity and passion usually reserved for creator owned characters.

What's there not to like about a couple who can stop time momentarily when they have sex and rob banks. Needless to say it's mature themed with surprisingly frank talk about sex but funny with great art by Zdarsky. 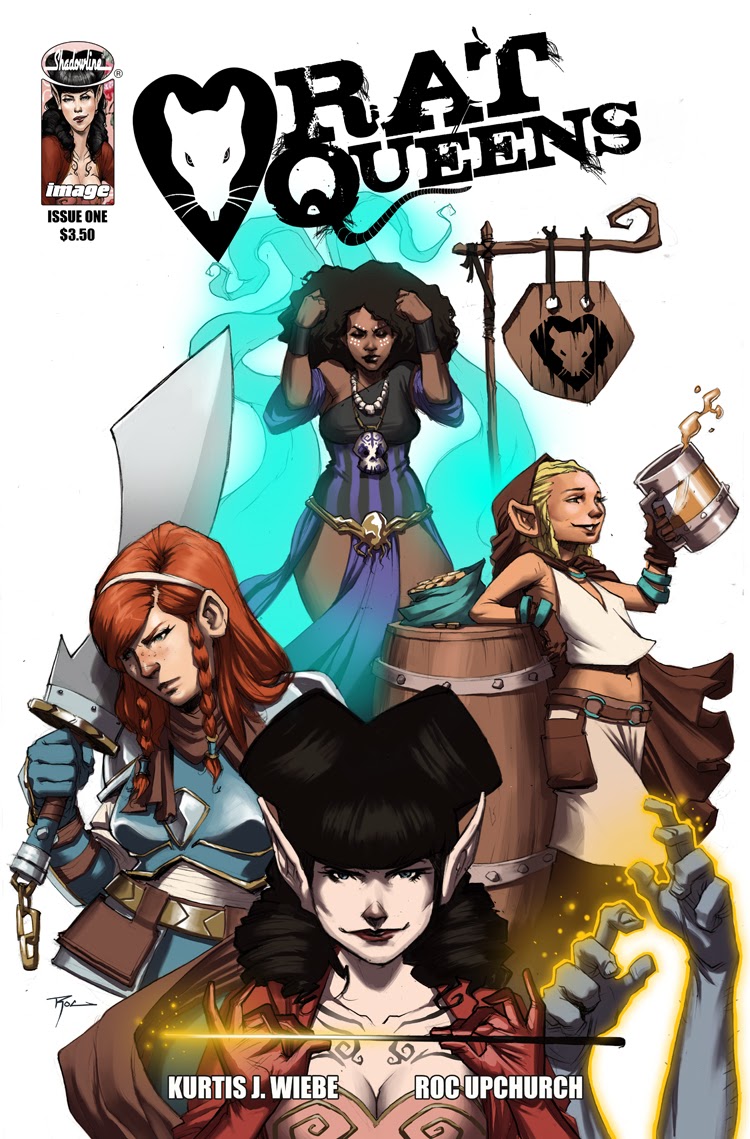 Image describes the Rat Queens as "a pack of booze-guzzling, death-dealing battle maidens-for-hire" and they are for sure as well as a fun group of snarky monster killers. Set in the fantasy world of dwarves and trolls this dark comedy is not afraid to spill some orc blood too. 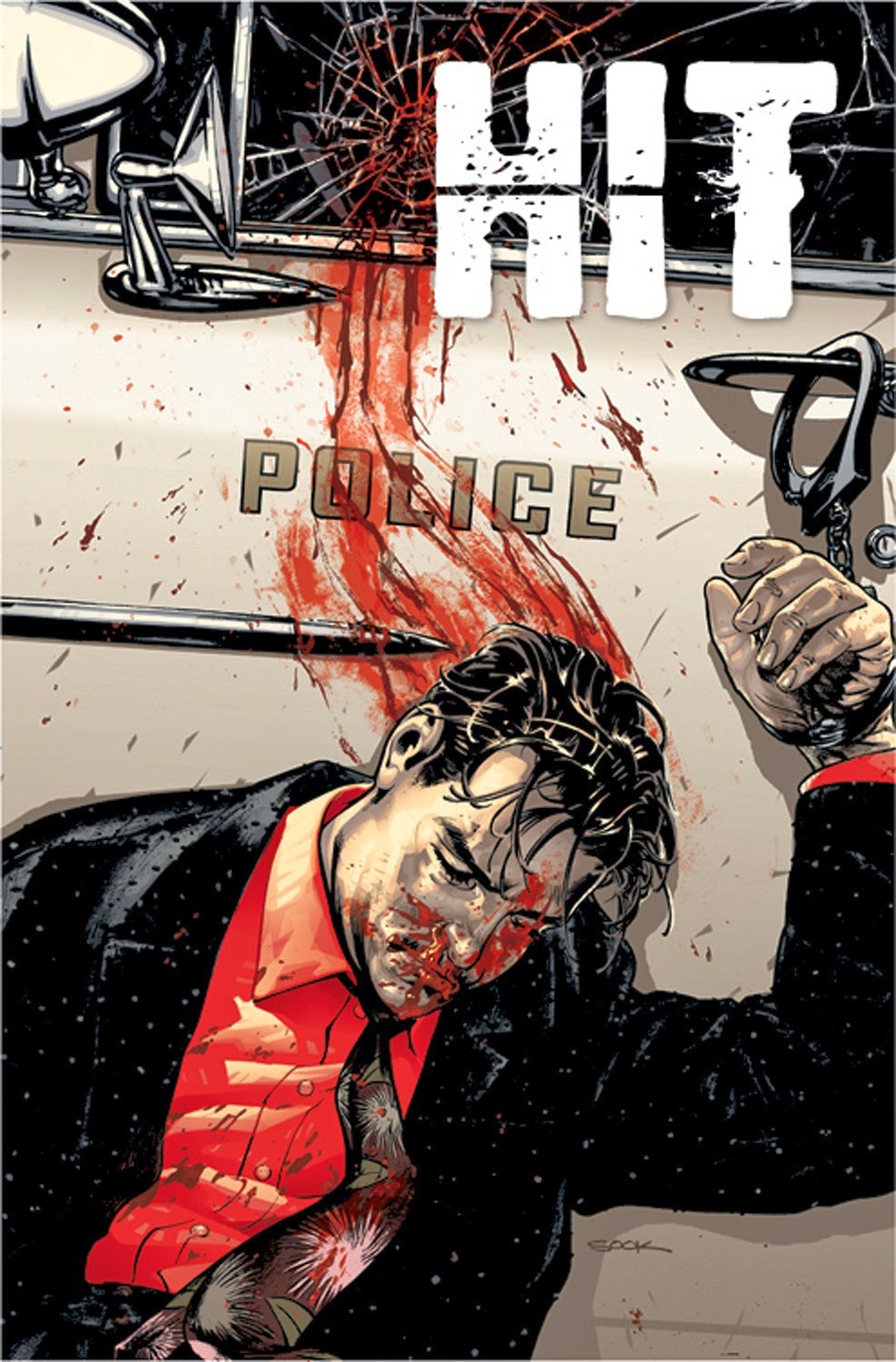 This dark crime drama is gritty with hard boiled detectives with locales all over Los Angeles in the 1950's. Police corruption is at its height and nothing will stop special police hit squads to keep the peace in a town infiltrated by mobster Mickey Cohen. Crime noir writing doesn't get any better than this and Del Rey's visuals add to the moody scenes and characters. 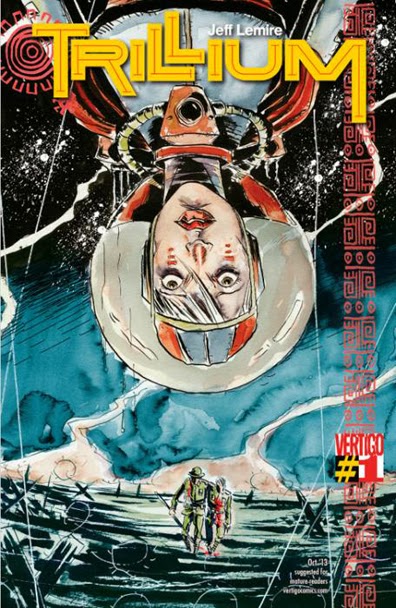 Jeff Lemire's creator owned sci-fi story is lush and mind-bending following the exploits of two people who exist 2000 years apart yet somehow meet at a mysterious temple and it turns their worlds completely inside-out. This unconventional love story is like nothing you've seen before. 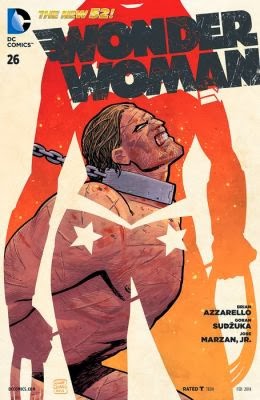 Brian Azzarello took on the relaunch of Wonder Woman in the New 52 with a sense of ownership and seemingly with a clear disregard for whatever else was going on in the DC universe. The new origin of Diana Prince irked some bloggers but frankly made more sense and the cast of characters that Azzarello surrounded her with made up the best supporting cast in comics. The beautiful art by Cliff Chiang made this one of the best renderings ever of the Amazon princess. Azzarello juggled the dysfunctional but entertaining family of gods, the protection of yet another of WW's step-siblings, the appearance of a New God, and the threat of Hell and the First Born with great care and masterful storytelling that made Wonder Woman's journey so enjoyable. 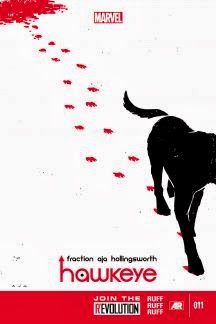 The corporate comic book title, Hawkeye, written like an indie continues to impress with its wit, humor and creativity. Clint Barton and Kate Bishop exist in a world all their own. There is no great overarching plot most times but the dialogue clicks and we're just happy to be in the room with them. When there is no dialogue as there was in the fantastic 'Pizza Dog' issue #11,where the entire story is told through the eyes of the dog, it was amazing in every way. It was just the type of risk this team is willing (and allowed) to make to bring an entertaining comic. It wouldn't be fair to call this a superhero book because rarely does Barton appear as Hawkeye but really as the lead character in his own sit-com/drama. Whatever the category we'd follow Matt Fraction and David Aja's wonderful monochromatic style wherever they take Hawkeye. 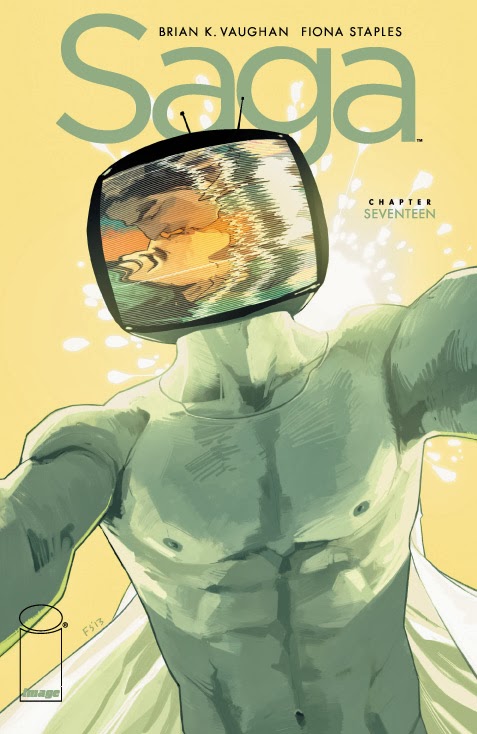 There aren't many books where the consensus is overwhelmingly positive and the quality consistently great like with Saga. Perhaps because few books, sci-fi or otherwise, gives each and every character a voice, purpose and weight no matter how small. Brian K. Vaughn has built this future world about star crossed lovers on the run into an enthralling drama about people, characters and what they'll do to stay together in the face of danger. While the main characters, Alana and Marko, are relatable and have great chemistry and you root for them at every turn it's the strength of those around them that helps shape their choices and consequences. Those characters like Marko's parents, the bounty hunter & his cat, the TV-headed prince, the half-bodied spector, and even the baby get to develop as individuals with stories of their own. They are fleshed out and more than just good or evil but as conflicted as our heroes. Fiona Staples makes this possible with fantastic facial expressions and colors that help set the mood of every scene. She can convey any emotion with a pencil and a vast landscape with splash of color. There isn't an inordinate amount of detail in each panel just enough where it counts, the characters themselves. Saga is the best example of a writer and artist weaving a story in complete synchronicity about people they care about and it shows. 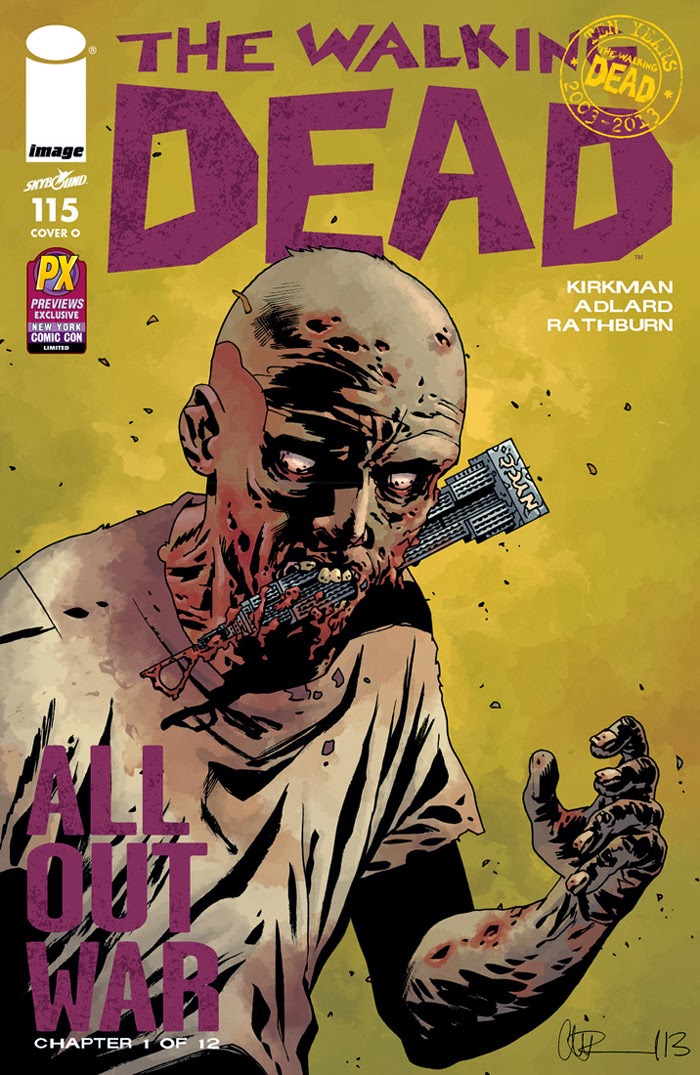 While the Big Two were busy relaunching their entire comic book line (and canceling some later), the good folks at Image Comics released The Walking Dead #115 and it became the biggest selling issue of the year. Ten years in and over a hundred issues later the series is not slowing down at all. Sure, the hit TV series on AMC doesn't hurt its profile but the question as to how much it helps is hard to verify. Regardless, readers still need a great book and Robert Kirkman and Charlie Adlard are doing just that. The carnage and violence fans expect is still there with Rick Grimes at the forefront. The storytelling is relentless with Rick and company still battling the more dangerous humans than zombies while Adlard provides the signature pencil-work. 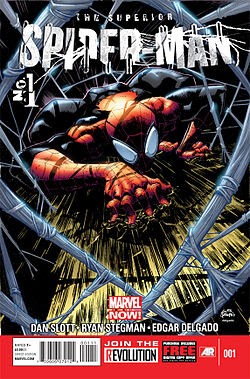 Superior Spider-Man may have been the most controversial comic book of the year. It certainly divided fans because they either loved it or hated it with a passion. Dan Slott's twitter feed was peppered with a lot vile angry comments about what he had done to the beloved character. Granted, we were not fans of the premise of Doctor Octopus in Peter Parker's body but there was no denying the exciting storytelling that was taking place. Slott is a gifted writer and it showed with his pacing, plotting and staging of fight scenes. The inner monologue of Doc Ock was delivered convincingly and even in awkward situations you felt sympathy for him. Slott won us over with sheer brazen talent and execution of a premise that could have been a colossal failure. Instead Slott and the talented artists gave us one of the most exciting Spidey tales in years.