Big Changes Ahead for Oliver Queen and Company 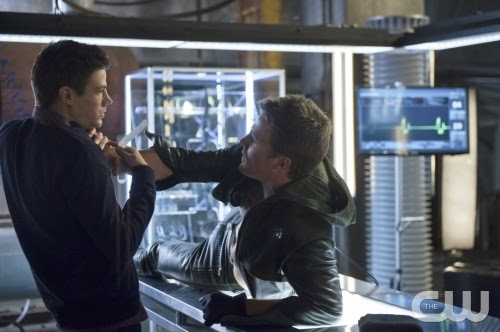 Arrow has steadily been building to the mid-season finale entitled 'Three Ghosts' and the jam-packed episode did not disappoint and set the stage for an explosive second half. It delivered some twists and turns that could fill multiple episodes but as usual the writers juggled the events, the nuanced ones as well as the action pieces, with precision and tension. And as any great finale it provided some answers while also introducing new obstacles for our hero, vigilante, hood, Oliver Queen. The result was a satisfying and thrilling finale worthy to be called television's best comic book based show.

The poisoned Queen is saved by the scientific handy work of Barry Allen. However, Queen is none too happy that Felicity revealed his identity to Allen. I mean sure he saved his life and all but knowing his real identity is somehow bad? He doesn't trust Allen just yet. It doesn't help that he was hallucinating about Shado for a moment. More on that later. But not even a 'thank you'? Anyway, Momma Queen texts him to come home and it turns out there's an issue with Thea and...

The arrow lodged in Roy's leg came courtesy of the Arrow himself so Ollie has Digg come and apply first aid after pulling the arrow out. As he begins to walk down the hall of the Queen mansion Shado reappears with a dire warning.

Shado is certainly one of the 'Three Ghosts' in the episode title so perhaps she's the ghost of Arrow past? What does she know about the going-ons in Starling City? Or is it just in Ollie's head? During an island flashback we find out how she became a ghost. After Ivo and his goons take Ollie, Sara and Shado from the submarine as well as the stash of the Miracle drug they are led through the forest. Ivo draws his gun and has Sara and Shado kneel and orders Ollie to decide who lives or he kills both. Needless to say Shado was not the chosen one.

As wrenching as this scene becomes it led to some online chatter about the use of 'woman-in-peril' and killed to further the male protagonist's angst. While the trope does exist in movies and comics it is debatable if this was the cheap way out for the writers or simply a progression of the circumstances. Ivo was capable of killing them all so this tactic further tormented Ollie by the impossible choice he was given. Some lamented the death of a character of color. However, I don't think there was ever a doubt that Shado would meet her end considering that Sara was obviously alive as Black Canary. In the end, it was Ivo who pulled the trigger but not to establish himself as a baddie but because he already had.

Meanwhile, Brother Blood and juiced up Brother Cyrus were planning on increasing production of the Miracle drug to form their super soldier army. Unbeknownst to them Felicity is hot on their trail tracking the interwebs with facial recognition after determining that Brother Cyrus is Cyrus Gold. Digg finally gets in on the action doing recon about the possible whereabouts of Gold. Unfortunately, Digg comes across Gold while searching his hotel room. After a thrashing by Gold, Digg escapes through the window and drives away.

Thea and Sin seek the help of Laurel, you remember Laurel don't you, to look into the supposed overdose of Sin's friend by starting at the medical office run by Blood. The character and actress, Katie Cassidy, have been getting a lot of negative feedback on social media lately. She's been referred to as useless and Cassidy's acting as wooden. I think it's unfair criticism. I admit her role has changed a lot and has been relegated to minor appearances usually involving crying but that's more a product of the writers fault than hers. I wonder how she'll be used the rest of the season. Hopefully, she'll have a more substantial purpose than pouty sadface role player.

Arrow informs Det. Lance about Cyrus Gold's role in recent attacks and knows his whereabouts. He warns that Gold is extremely dangerous and a tactical team is necessary. Lance convinces his commander, Lucas, to form a team to go after him. He reluctantly agrees and Blood's police mole, Officer Daly, volunteers to join the mission while also informing Blood of it. As you can expect it did not go well. 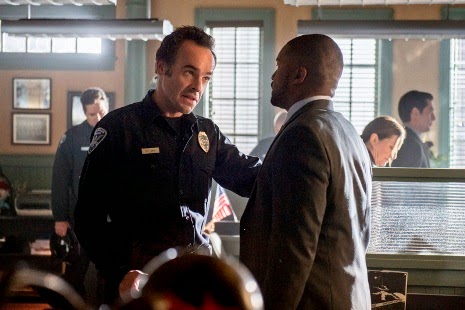 A brutal brawl and fire fight takes place but Lance and company are not a match for Gold's superhuman strength. Soon Lucas is dead and Lance injured. This leads to another sobbing scene for Laurel at her dad's hospital bedside. Blood appears to check on Lance and console Laurel which she appreciates with a big hug. They seem to be getting cozier. Arrow shows up in Lance's room to apologize for his partner's death. Lance hands him a key he swiped from Gold but makes it clear he wants him dead.

At the Arrow Cave, Ollie receives a visit from ghost number two, a less than impressed Slade. A fight ensues, tearing the place apart as Slade tosses Ollie around all the while telling him he's no hero. Harsh! Another hallucination that tries to deter him from continuing his campaign against crime and corruption. But is it just self-doubt and his subconscious playing tricks on him manifesting into these visions? Afterwards, he talks with Digg and he offers some advice based on his experience coming back from overseas. The ghosts will disappear as soon as he understands the message they're sending him. Felicity found that the key Lance got from Gold pertains to a location in the Glades.

While searching for files on Sin's friend at Blood's medical office, who apparently was a prime candidate for the Miracle drug, Roy is interrupted and ultimately captured by Blood's henchmen. He's brought back to a masked Blood, strapped to a chair, and prepped to be injected with the drug. 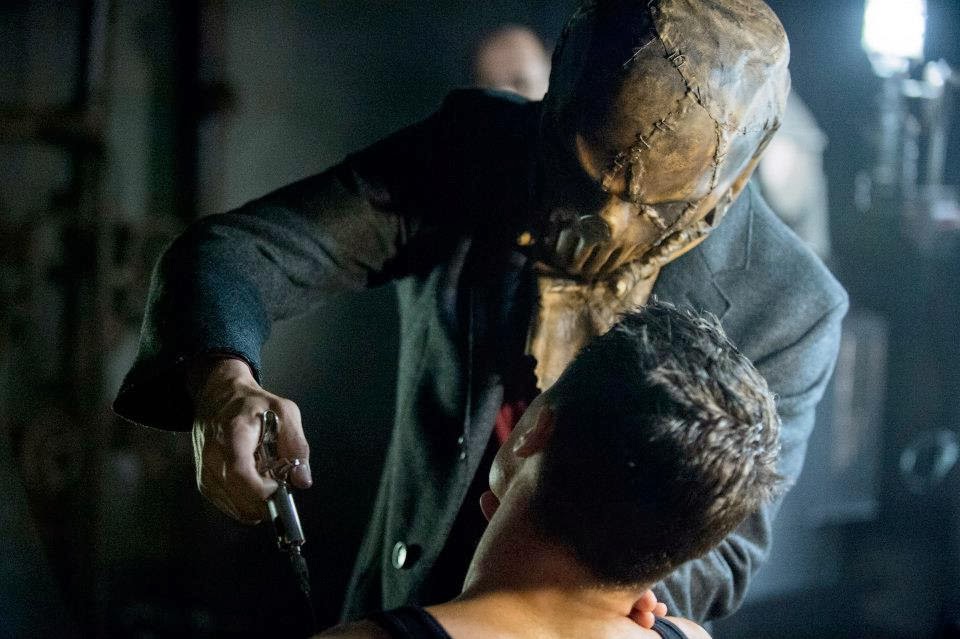 Roy's eyes run with blood and seemingly didn't make it through when Arrow crashes the party and another great fight sequence begins. Ollie is getting beat and thrown around by Gold again. Gold seems impenetrable because none of Ollie's punches fazes him. Hurting and weak on the floor, Ollie gets a visit from a third surprising ghost. Good old Tommy.

Inspired and revitalized by Tommy's Rocky-esque pep talk, Ollie gets up and beats the stuffing out of Gold smashing him against a wall and firing an arrow that causes an explosion leaving Gold lying on the floor with what looks like acid covering his face. He had conquered some of his demons it seems but he still had to attend to Roy. Ollie began applying pressure and compressing Roy's chest until he was revived. Roy lives! The serum hadn't killed him. And now he possibly has the same super strength that both Slade and Gold were given. Yikes! Super Roy is coming!

On TV, now as Councilman Blood, he announces his run for mayor. Later, we see Blood standing in an office talking to yet unseen man behind the desk. Blood informs the man of the lost supply of serum but the man reassures there is more that can be made from his own blood. The man tells Blood to leave Arrow to him. He is a friend. He will handle it and destroy him slowly. The man is Slade.

And as a refresher we get a flashback to the island after Slade comes to from the drug and races into the forest to find Shado dead and in his rage dismantles Ivo's thugs one by one, amazed at his own strength and ferociousness. Even punching through a guy's body. Finally, holding Shado in his arms. The feels.


At the Arrow cave, Ollie and the gang decompress. Felicity informs an inquiring Ollie that Barry had returned to Central City to see the oft-mentioned particle collider turned on. Back at his lab at CCPD there's rain and thunder and as the collider is set there's a malfunction, power goes off, chemicals seem to rise almost in suspended animation to Barry's shock when suddenly a bolt of lightning crashes through the window striking him and throwing him across the lab where he remains still with a distinct flash of color in his face. See it here:


The moment we all were waiting for had arrived and the Flash was born. At least the origin is revealed but we'll have to wait for the official pilot next year to see him in costume and in action. Grant Gustin as Barry Allen really flourished in his slightly awkward but sweet role as Arrow fanboy and Felicity suitor. It's unlikely there'll be romance there unless the characters crossover each other's shows and more realistically Barry had already mentioned an unrequited love of his own in Central City. We do know that casting has begun for the future Mrs. Allen, Iris West. Besides, social media insists on an "Olicity" coupling. Ugh.

And finally we see that Barry has left Ollie a gift. The mask he had suggested earlier for him to wear to better conceal his identity. With help from Felicity he dons the mask and Ollie asks her how he looks and she says "like a hero." End of mid-season finale. Noooooooo!