Latino Review got the exclusive on this fan film trailer of stuntman turned director, Jesse V. Johnson, and his vision for a Wonder Woman movie. As we've known for too long, the folks at DC and Warner Bros. seem incapable or unwilling to give the Amazonian Warrior princess her proper and long overdue respect in bringing one-third of DC Comics holy trinity a worthy feature film adaptation. Luckily, Johnson's experience in film afforded him the opportunity to show what he could do behind the camera by making this exciting Wonder Woman trailer.

Unlike many fan films floating around on the web this one has high production values and great special effects. Johnson enlisted the help of actors Nina Bergman as Wonder Woman and Peter Stormare as a Nazi interrogator to add some quality performances to the action-packed escape sequence. Johnson's manager believed in his directorial potential.

It was my manager / producing partner Kailey Marsh’s idea to shoot the trailer.  She really believes I should be a studio director, and thought shooting WonderWoman would be a great way to show off my skills in a fun way that people could get excited about.

This trailer makes for a great calling card to potential Hollywood suitors looking for an up and coming talent. The real question is if the suits at Warner Bros. are watching and listening to the outcry from fans that Wonder Woman should be a priority considering the studio wants to release a 'Justice League' movie  sometime in the next five years. If nothing else, the trailer proves that Wonder Woman can translate to the big screen in the right hands with the right script. Something fundamentally obvious to everyone but to those that can actually make it happen.

DISCLAIMER:
Wonder Woman is a non-profit film for private use only, and is not for sale or resale. It is strictly for the promotional use of the filmmaker. It is in NO way endorsed by Warner Brothers or DC Comics nor is it intended to undermine or compete with any existing or forthcoming material. Wonder Woman is created for fun and should not be sold, rented or used for anything of the sort. Station 3 and Jesse V. Johnson make no claim to any of the characters, locations, storyline, props, costume designs, logos, names or situations that are trademarked, copyrighted or otherwise protected by the federal, state, international or other intellectual property law. This film is produced solely for the personal enjoyment of the cast, crew and any other Wonder Woman fans. No copyright infringement is intended or implied.
Posted by Enrique Rea at 2/27/2013 09:52:00 AM No comments: 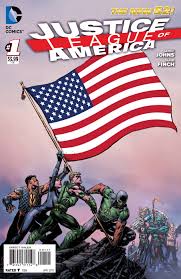 JUSTICE LEAGUE OF AMERICA #1
SYNOPSIS: The march toward TRINITY WAR begins with part one of “WORLD’S MOST DANGEROUS”!

• Green Lantern! Green Arrow! Catwoman! Katana! Vibe! Hawkman! Stargirl! They aren’t the world’s greatest super heroes—they’re the most dangerous! But why does a team like the JLA need to exist? What is their ultimate mission? And who is pulling the strings?
• Plus: Find out why Martian Manhunter is the most dangerous of them all. Period.

REVIEW: Apparently, there is a need for another Justice League full of second tier members who are actually more interesting than their story-exhausted A-listers. Amanda Waller enlists Steve Trevor to helm this group of heroes and she explains their significance one by one in the first issue. It's basically a team set-up issue you'be seen before but Geoff Johns dialogue is brisk and feisty and while not a big David Finch fan his art is more than acceptable. A good start for the series and still a better team book than the dismal Marvel travesty, Thunderbolts. 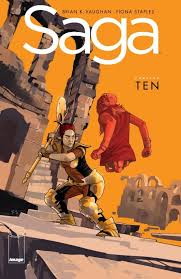 SYNOPSIS: Marko and Alana's long-lost babysitter Izabel finally returns to the fold, but at what cost?

REVIEW: One of the best titles from 2012 continues where it left off with a beautifully written and illustrated issue #10. Marko and Alana are still on the run with Marko's parents in tow and bounty hunters hot on their tail. Izabel returns to great effect and is one of the many enjoyable characters in this or any book. This sci-fi adventure is a fantastic ride like an epic movie in a graphic novel form. The world it inhabits is all it's own with great action but really it's the heart of it's characters that make this one of the surest bets in comic books. 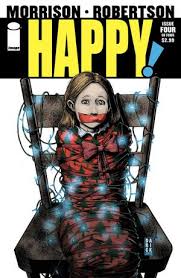 
SYNOPSIS: Christmas is here and the bad men are about to open their presents! It's showdown time but can Nick Sax save the day without Happy to help him - or will he screw this up like everything else? You must not miss the blood-drenched conclusion of our heartwarming Yuletide classic!

REVIEW: The gritty conclusion of the limited series by Grant Morrison and Darick Robertson doesn't disappoint. The hapless and battered Nick Sax gets a last chance at redemption searching for a kidnapped child with the help of Happy, his blue imaginary donkey, in a bloody twisty ending. 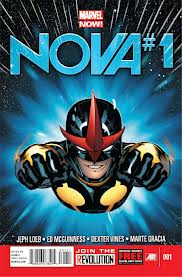 SYNOPSIS: The Human Rocket returns! You’ve followed him through the history making (and changing!) AvX and now the mystery of the all-new Nova are revealed in this breathtaking new ongoing by the best-selling, award winning team of Jeph Loeb and Ed McGuinness (RED HULK, Avengers X-Sanction). Sam Alexander is a kid bound by the gravity of a small town and a father whose ridiculous, drunken fairy tales about a “Nova Corps” were just another heavy burden in a life full of them. But luckily for Sam Alexander…soon gravity won’t even matter. And those troubles? It’s like they’re
a billion miles away.

REVIEW: A very amiable beginning. Sam reminds me of Peter Parker as a bullied school kid but also living down the fancy space stories of his blue collar dad. Soon Sam realizes there's more to his old man's tales than he realized and the stage is set for him to take flight. Loeb and McGuinness do a great job of making this such a likable book it's hard to critique it too closely after one issue. The next issues should really determine it's worth but so far it's a cleanly executed story that makes you want to see what's next in Sam's adventure. 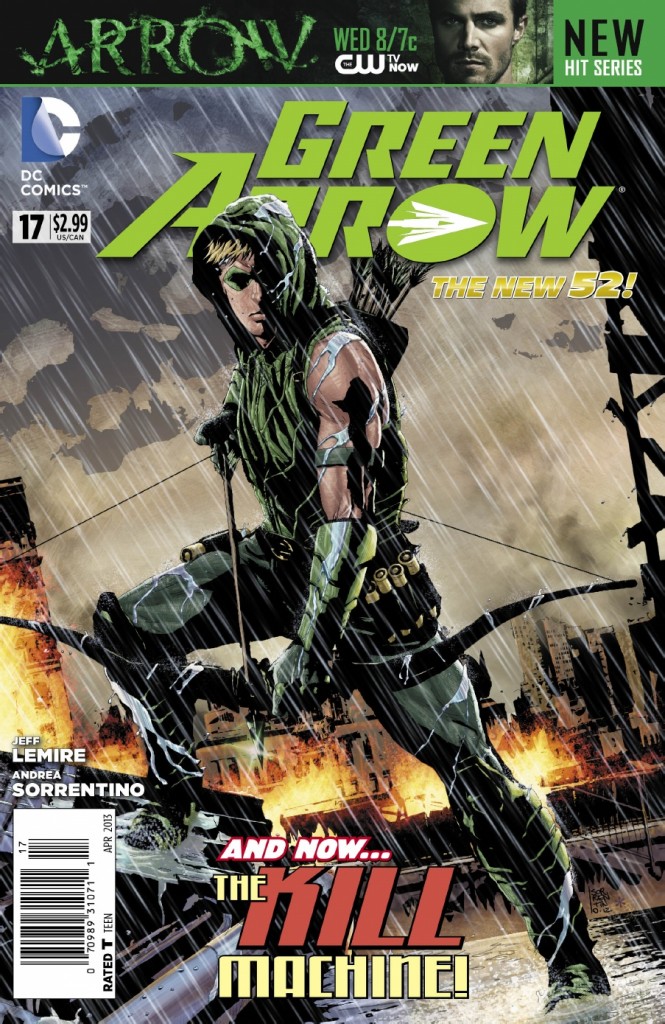 SYNOPSIS: Welcome the new team of writer JEFF LEMIRE and artist ANDREA SORRENTINO! As Ollie struggles to come to terms with the loss of his fortune, his company and his heritage, he discovers a shocking truth about his father that ties to his time stranded on an island before he became Green Arrow. Plus: Green Arrow battles the deadly archer known as Komodo!

REVIEW: The new team of Lemire and Sorrentino inject some fast paced action and dialogue. It all goes by in a blur but does build excitement leading to future issues. This arc deserves some attention. Even if  Ollie does come across a little whiny at times.

Synopsis: Witness the massacre that makes Cable and X-Force criminals. They can't go back from here?

Review: This series is getting better. The story line is picking up steam providing some great action with the group battling some grossly infected humans. The best part is how the characters interact with each other. A great team book involves unforced chemistry between members and this book has that. 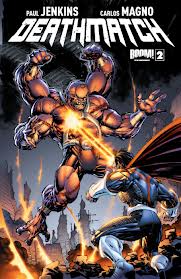 
Synopsis:The battle royale continues as the world’s greatest superheroes are forced to fight each other to the death in a mysterious, otherworldly prison. Who will be crowned the victor in this month’s grudge match? More importantly, who will be the loser? And will the cabal of Sable, Meridian, Sol Invictus, and the Manchurian be able to decipher the mysteries of the prison before one of them is selected to enter the arena? Written by industry legend Paul Jenkins (SENTRY, INHUMANS) and drawn by comics superstar Carlos Magno (PLANET OF THE APES, TRANSFORMERS), DEATHMATCH is a dark, psychological deconstruction of the superhero genre that can’t be missed


Review: After super heavy exposition in issue #1 the second issue of 'Deathmatch' is way more fluid and the characters are starting to take shape. This 'Hunger Games'-style story line filled with super heroes forced to battle each other in a tournament run by unknown forces is fun despite entering a comic book with it's own universe of heroes that are completely  new. 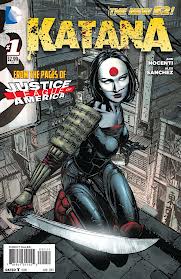 
Synopsis: From the pages of JUSTICE LEAGUE OF AMERICA and BIRDS OF PREY! KATANA is a former assassin on a noble quest to restore the OUTSIDERS to their former glory! Will she succeed, or will she be overcome by the power of her sword, the SoulTaker?

Review: Intriguing story told from a first person perspective and great artwork. Another great female-led DC title. Despite the many operating problems at DC they do have a knack for creating some creative books with female leads. Katana is trying to keep a low profile in San Francisco while she battles an old foe. The art by Alex Sanchez reminded me of Frank Miller's Ronin and Ann Nocenti does a nice job of expressing Katana's inner dialogue with personality and determination.
Posted by Enrique Rea at 2/19/2013 01:26:00 PM No comments: