In the early days of my comic book collecting as a young man there are books that stay with you. Sure, the big books like Batman, Spider-Man, X-Men, and others easily stand out but it's the guilty pleasures, the books whose short shelf life don't really reflect the impact they had good or bad as a fledgling comic book reader. In 1983, DC Comics released Vigilante created by Marv Wolfman and George Perez and I was hooked.
It was one of the titles back then that used a "prestige" format to justify the higher prices. Thicker, higher quality paper stock with glossy pages and more mature content. On it's surface Vigilante was a Batman derivative. Adrian Chase was a New York district attorney tired of the bad guys getting off on technicalities. His family is murdered by a mobster he was prosecuting that leads to him to seek justice as the ski goggled, track suit wearing vigilante. Chase started off as the blond haired version of the Dark Knight. 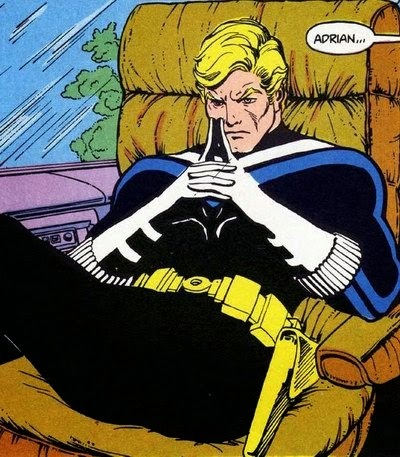 The wealthy avenger also had a custom RV with machine gun equipped motorcycle created by his assistant J.J. Davis, the tech wiz, and his other partner was research assistant Terry Gomez. He even had his own utility belt but did carry a gun. The goggles actually used infrared and he also carried a sniper rifle on occasion. His non-lethal methods of dealing with New York's criminals and other costumed baddies didn't last long.

Vigilante took a quick turn into Punisher territory as Chase was compelled to use more violent means to neutralize the villains that he encountered. This is where he began to separate himself from just another costumed do-gooder into a guilt-ridden arbiter of street justice. And the stories began to get darker and darker.

Topics like prostitution, pedophilia, religious fanaticism, rape, and domestic violence began to permeate the pages bringing the starkness of the real world into comics. The mid-1980's was a breeding ground for new voices like Frank Miller and Alan Moore to create some of the medium's legendary works of graphic storytelling. 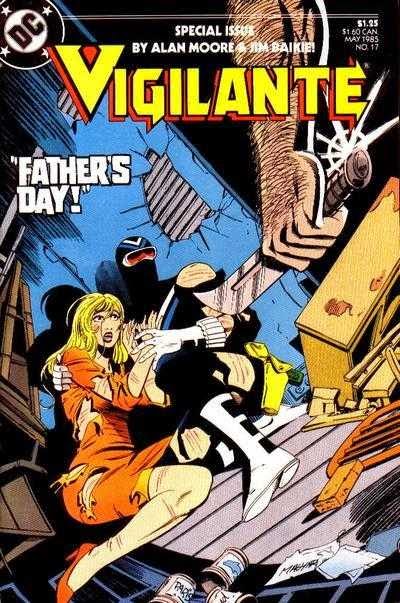 Before he wrote the seminal Watchmen, Moore's two-parter entitled Father's Day, in issues #17-18, told the bleak story of a sociopathic abusive father pursuing his fleeing daughter leaving a trail of dead bodies along the way. He meets a bloody end under the wheels of the car of the prostitute who was hiding her.

Other stories involved a mad bomber, kidnapping, sex trafficking, and throughout the fight for what he considered justice his mind began to feel the weight of his actions. After brutally beating  an ex-con only to find out he was innocent he hung up his goggles.

A friend and fellow judge Allan Welles took over as the Vigilante unbeknownst to Chase. His methods were even more violent than Chase's resulting in deaths of even minor thieves. Chase tracked him down and killed his replacement only to find he had killed his friend. Unfortunately, it would not be the last Vigilante to die. 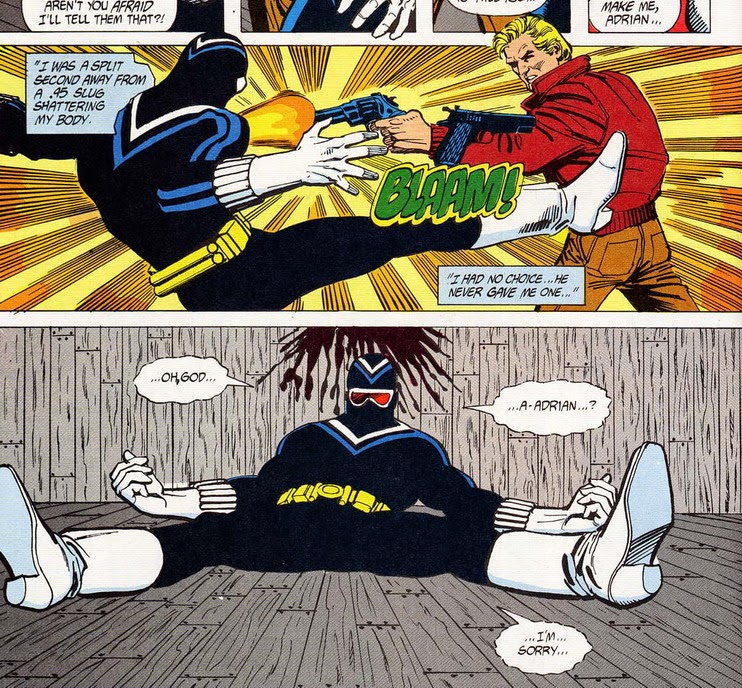 Chase's bailiff, Dave Winston, soon took on the Vigilante mantle and went back to using non-lethal methods to intimidate crooks. He was killed by the Peacemaker leaving Chase more depressed and guilt-ridden than ever. He donned the Vigilante mask once again to avenge Winston's death. Out of shape and beaten, Chase was exposed by the Peacemaker in front of a news crew unmasking him to the public. He spiraled even further into depression and paranoia. He became mentally unstable as the sins of his actions and those he hurt along the way gave way to fits of anger and insanity. 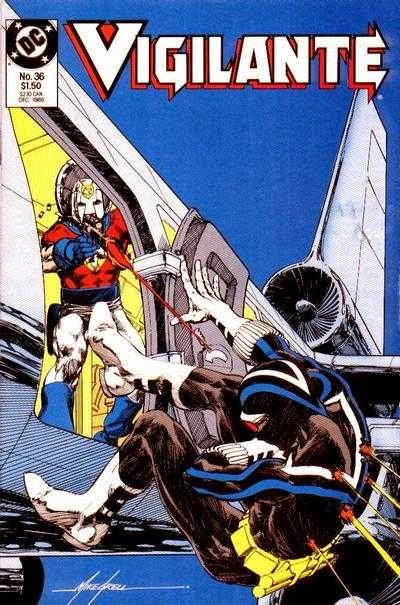 As the Vigilante he had lost control and even policemen didn't stand in his way. It was then that he reflected upon his life and realized his initial intentions became warped and sullied by his use of violence the deaths of those around him. A broken and regretful man, Chase killed himself in the last issue of the series, #50.

Not a feel-good ending of course but considering the nature of the mature themes of the series it was quite fitting to end on a down note.

What was the attraction at the time? What made this resonate with me? It was a time when the industry was beginning to grow up in some ways and the format of the book, the mature content, the stories that weren't being told in the mainstream books was exciting. Having legends like Marv Wolfman and George Perez names on the first issue didn't hurt either (although the majority of the series was written by Paul Kupperberg with Tod Smith providing much of the art).

It was the idea that what if Bruce Wayne used violence against the bad guys as Batman and where would that lead him. Adrian Chase began as that and slowly deteriorated into a vengeful psychopath at times. It was a deconstruction of the noble hero grounded in the real world with real consequences. Sure, he has his share of costumed baddies like the Electrocutioner and Black Thorn to deal with but it was his closest allies that often felt the brunt of his actions.

In the end, his "heroism" cost him his sanity as well as his loved ones. There was a moral dilemma in every story and it wallowed heavily in the gray areas. This was different than most books on the shelf. Was it perfect? No. Was it popular? Not so much. Did it break boundaries? Absolutely. 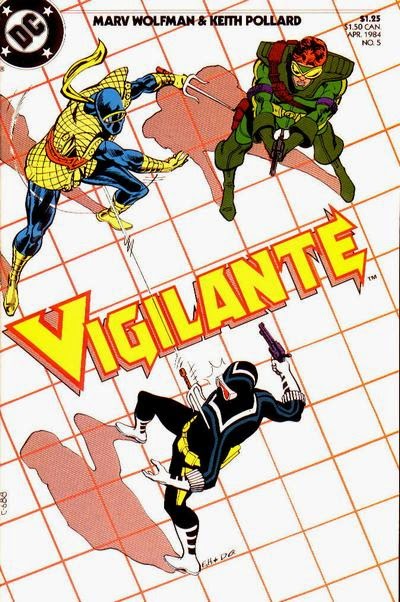 A pair of villains, Cannon and Saber, were the first ones I can remember reading that alluded to their homosexual relationship. This was 1984. A formidable pair of assassins that almost killed the Vigilante. It was progressive for it's time.

The themes themselves were pretty heavy and adult and that was a rarity in a big publisher like DC Comics. It was not kiddie fodder for sure. The hero who becomes an anti-hero had its allure at the time and still resonates now because the current atmosphere of "dark" and conflicted superhero material out now. I mean Mark Millar has made a career of taking the themes of a book like Vigilante and ramping it up a hundred times higher.

Vigilante may be a footnote to most and a forgotten Batman/Punisher hybrid in the annals of comic books but it holds a place in my heart as a symbol of transition, a period of adolescence for me as a young man, a fledgling comic book reader but also for the medium that I still love and I saw grow up before my eyes. 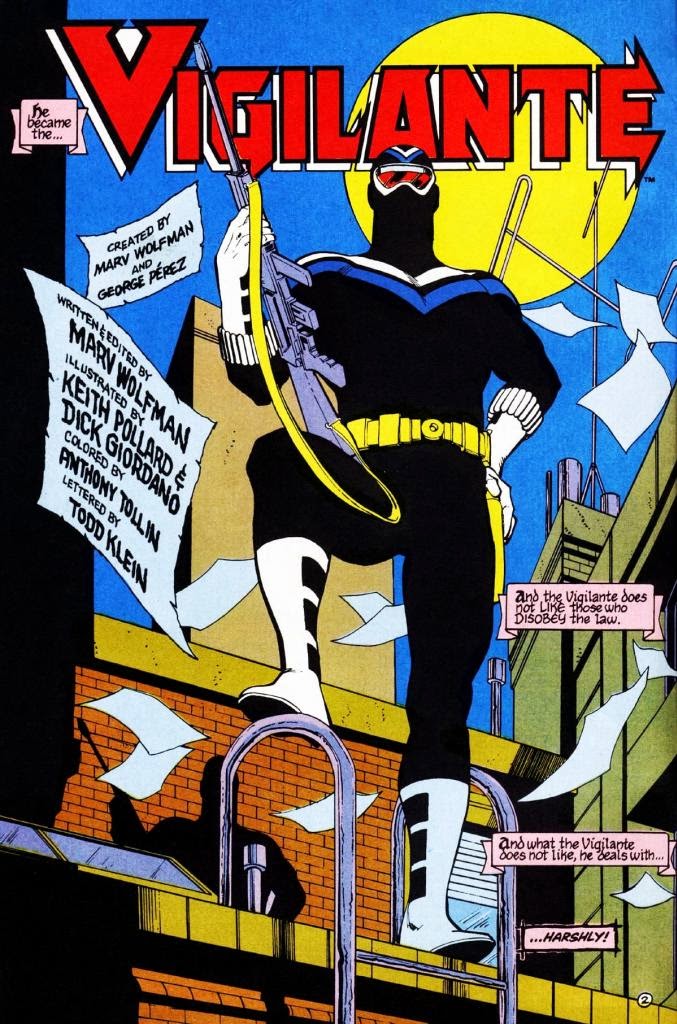