This week's haul of comics include some the most anticipated issues of the year. Batgirl #35, Wytches #1, Chilling Adventures of Sabrina #1 and the infamous $5 issue of Batman #35 that begins the Endgame arc.


The new creative team and look of Batgirl #35 is sure to sell fast. For the season chills and thrills Wytches by Scott Snyder and Jock is a creepy look at witches you've never seen before while Sabrina follows in the footsteps of Afterlife with Archie in scaring up some real horror.

Captain Marvel TPB by Kelly Sue DeConnick and David Lopez is a great introduction to the popular Marvel hero that is becoming a feminine icon for fans all over. Speaking of feminine icons, Wonder Woman: The Complete Newspaper Strip 1943-1944 is a nostalgic look at the Amazon princess as she was conceived as a daily comic strip. 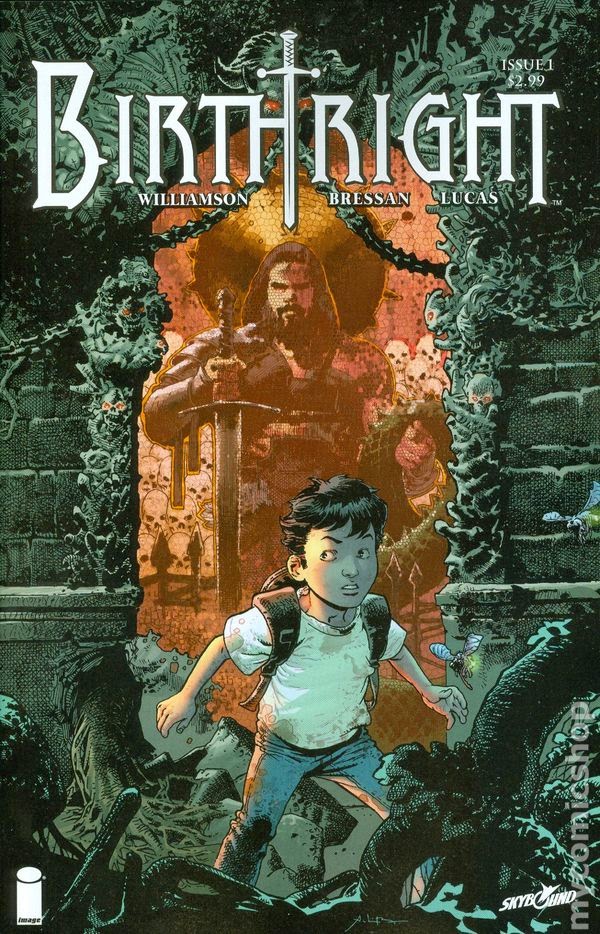 Written by Joshua Williamson. Art and Cover by Andrei Bressan and Adriano Lucas. For the Rhodes family, losing their son was the most devastating thing that could've ever occurred… but it couldn't prepare them for what happened when he returned. Cover price $2.99. Written by Frank J. Barbiere. Art and Cover by Victor Santos. Everything's looking up for Ray-he's off the hook for the murder of Hotspot, the crooked cops aiming to blackmail him have been framed and incarcerated, and he finally has enough money to afford treatment for his wife's M.S. diagnosis. So why do all of those problems pale in comparison to the 'favor' that he now owes Biochem: kidnapping the world's strongest hero, Ultra? Cover price $3.99. 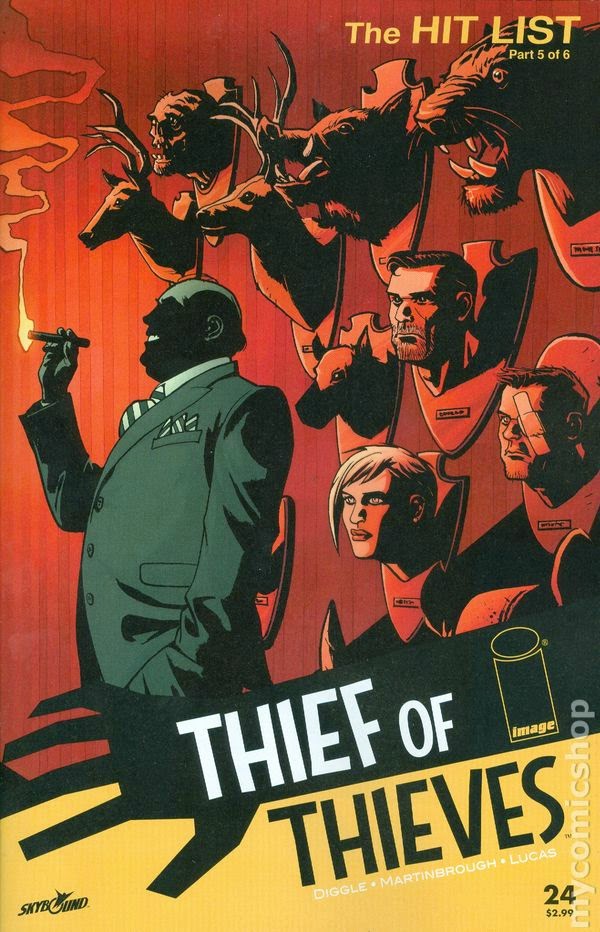 Written by Andy Diggle. Art and Cover by Shawn Martinbrough and Adriano Lucas. As 'The Kill List' marches towards its conclusion, somebody's got to die... Cover price $2.99. 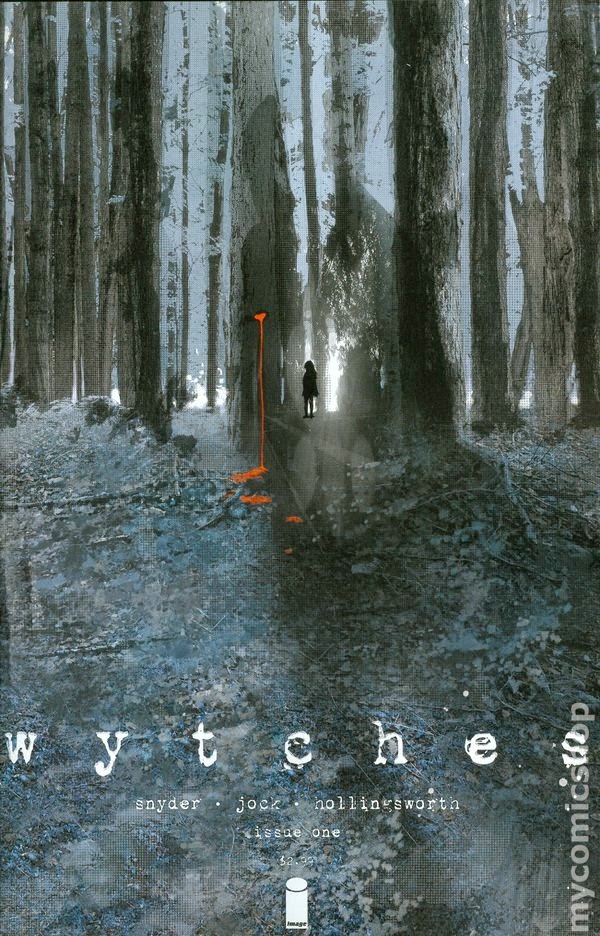 Written by Scott Snyder. Art and Cover by Jock. Across the globe, century after century, men and women were burned, drowned, hanged, tortured, imprisoned, persecuted, and murdered for witchcraft. None of them were witches. They died protecting a terrible and hidden truth: witches, real witches, are out there. They are ancient, elusive, and deadly creatures that are rarely seen and even more rarely survived. This October, superstar creators SCOTT SNYDER (SEVERED, Batman) and JOCK (SNAPSHOT, Batman) unveil WYTCHES, and introduce you to a world of unimaginable horror in a special EXTRA-SIZED FIRST ISSUE with 30 pages of story and no ads for just $2.99 Cover price $2.99. 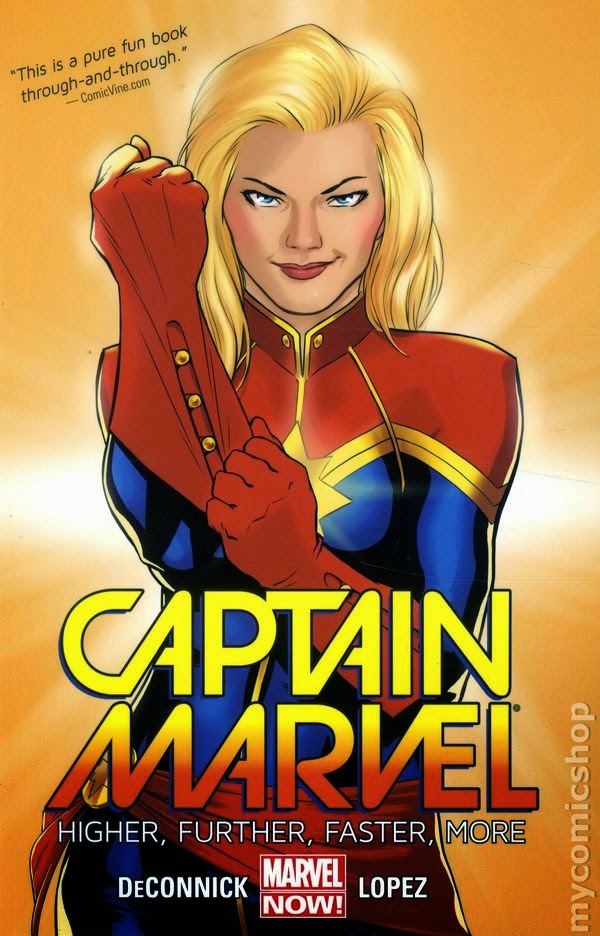 Volume 1 - 1st printing. "Higher, Further, Faster, More!" Collects Captain Marvel (2014 8th Series) #1-6. Written by Kelly Sue DeConnick. Art by David Lopez. Hero! Pilot! Avenger! Captain Marvel, Earth's Mightiest Hero with an attitude to match, is launching headfirst into an all-new adventure! As Carol Danvers comes to a crossroads with a new life and new romance, she makes a dramatic decision that will alter the course of her life - and the entire Marvel Universe - in the months to come. But as Carol takes on a mission to return an alien girl to her homeworld, she lands in the middle of an uprising against the Galactic Alliance and the Spartax! Investigating the forced resettlement of Rocket Girl's people, Carol discovers that she has a history with the man behind the plot. But when the bad guy tries to blackmail Carol and turn the Avengers against her, it's payback time! Guest-starring the Guardians of the Galaxy! Softcover, 136 pages, full color. Cover price $17.99. 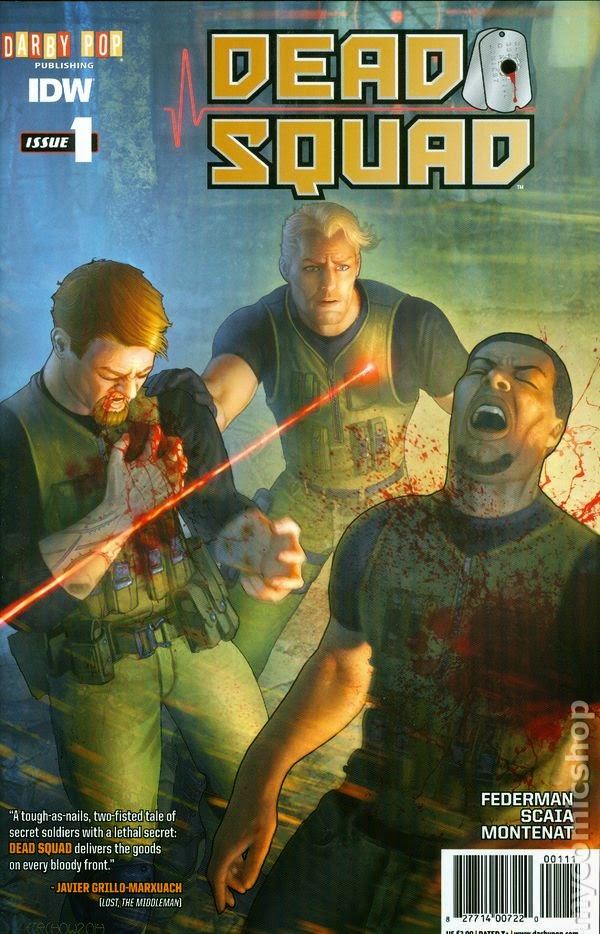 Written by Matthew Federman and Stephen Scaia. Art by Michael Montenat. Cover by Steve Firchow. The latest from Darby Pop! Three highly-trained Delta Force Operators embark on a high-stakes mission to obtain a mysterious serum. But when they are betrayed by one of their own, securing the drug immediately becomes a matter of life, death, and their own resurrection. Cover price $3.99. 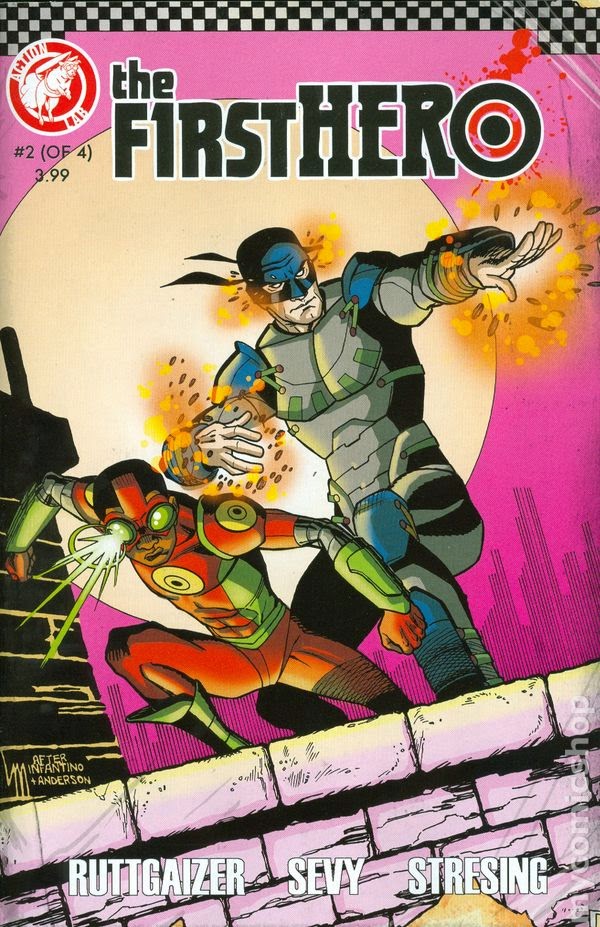 Written by Anthony Ruttgaizer. Art by Phillip Sevy. Cover by Lee Moder. Back on American soil, Jake settles into his normal life. But when the police attempt a violent takedown on a teen extrahuman, will Jake endanger that normal life and use his own powers to save the boy? Or will he keep quiet and abandon the youth to his grisly fate? Cover price $3.99. 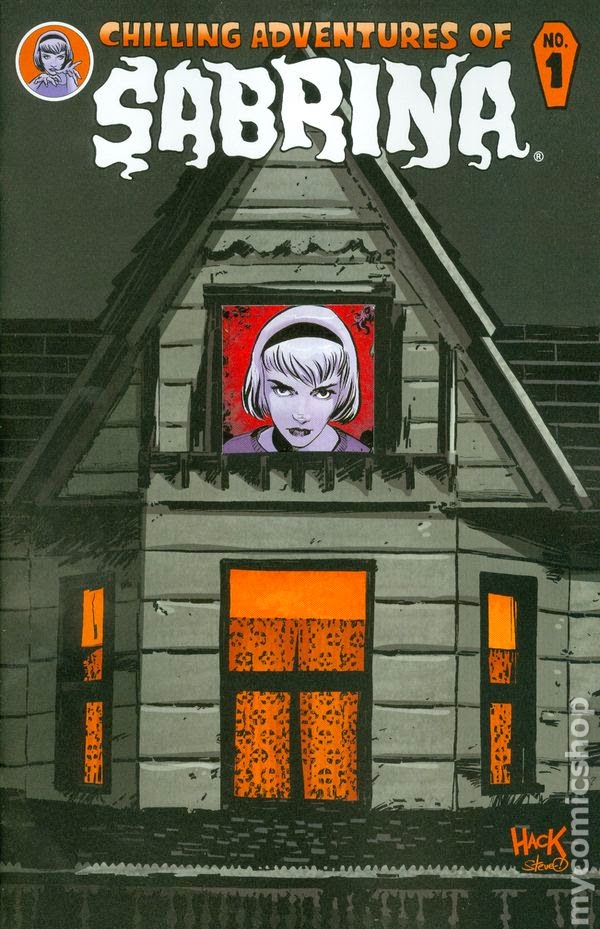 Written by Roberto Aguirre Sacasa. Art by Robert Hack and Jack Morelli. Cover by Robert Hack. New Ongoing Series! Terror is born anew in this dark reimagining of Sabrina the Teenage Witch's origin. On the eve of her sixteenth birthday, the young sorceress finds herself at a crossroads, having to choose between an unearthly destiny and her mortal boyfriend, Harvey. But a foe from her family's past has arrived in Greendale, Madame Satan, and she has her own deadly agenda. Archie Comic's latest horror sensation starts here! For TEEN+ readers. Cover price $3.99. 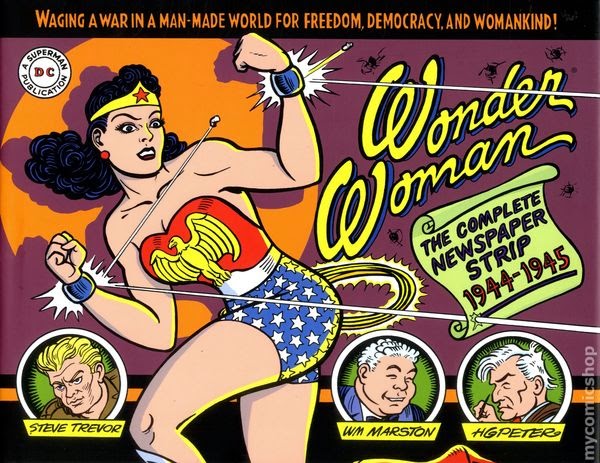 1st printing. Written by William Moulton Marston. Art by Harry G. Peter. Cover by Peter Poplaski. Just a few years after she burst into comic books, the world's most famous female superhero starred in her own daily newspaper strip written and drawn by the same creative team that produced the comic book: William Moulton Marston and Harry G. Peters. It all starts on Paradise Island where Amazonian women rule supreme and no men are allowed. Led by Princess Diana, their way of life is about to change when Steve Trevor, a wounded American soldier, washes up on their shores. Soon, Diana-rechristened Wonder Woman-is off to America, where the saga continues! Hardcover, 11-in. x 9-in., 196 pages, B&W. Cover price $49.99. 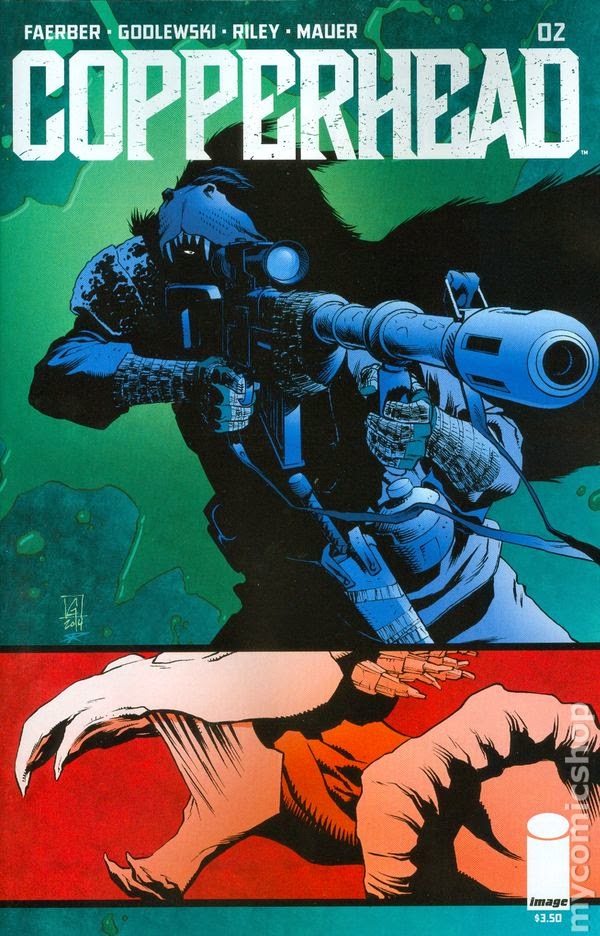 Written by Jay Faerber. Art and Cover by Scott Godlewski and Ron Riley. Sheriff Clara Bronson and Deputy Boo continue their investigation of a multiple homicide just outside the Copperhead city limits. Meanwhile, Zeke Bronson gets in way over his head in the Badlands. Cover price $3.50. 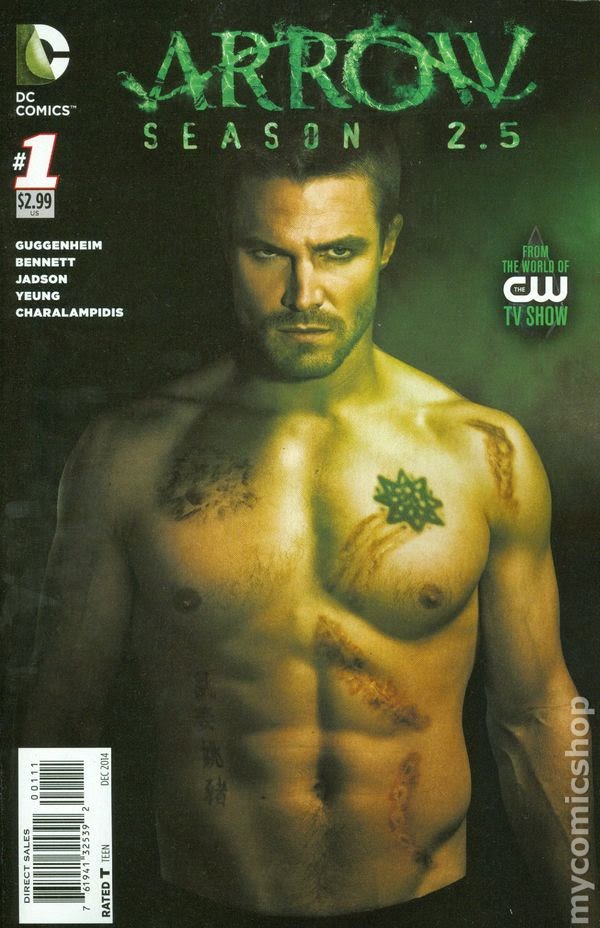 Written by Marc Guggenheim. Art by Joe Bennett. An all-new digital first series begins! Bridging the gap between seasons 2 and 3 of the hit TV series Arrow, Season 2.5 follows Oliver Queen's story as he battles the Church of Blood, with the fate of Starling City hanging in the balance. Featuring an all-star cast of Oliver's greatest allies and enemies including the Huntress, Black Canary and Deathstroke! Cover price $2.99. 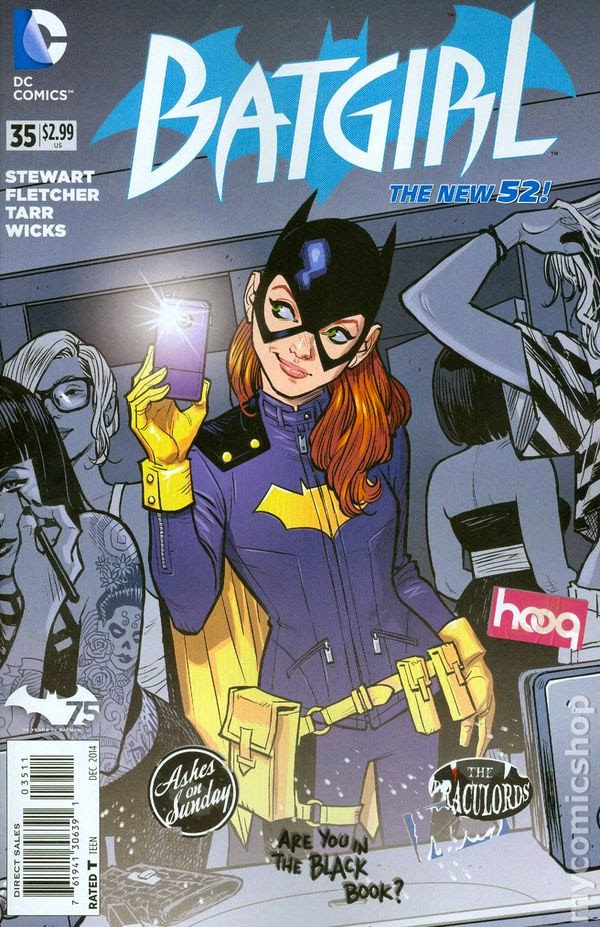 Written by Cameron Stewart and Brendan Fletcher. Art by Babs Tarr. Cover by Cameron Stewart. Barbara Gordon is no stranger to dusting herself off when disaster strikes… so when a fire destroys everything she owned, she spots the opportunity for a new lease on life - and seizes it! Following the rest of Gotham's young adults to the hip border district of Burnside, Barbara sets about building an all-new Batgirl… and discovers all-new threats preying on her peers! It's a re-invention of Batgirl from the boots up, by the incredible creative team of Cameron Stewart (BATMAN INC.), Brenden Fletcher (WEDNESDAY COMICS), and rising star Babs Tarr! Cover price $2.99. 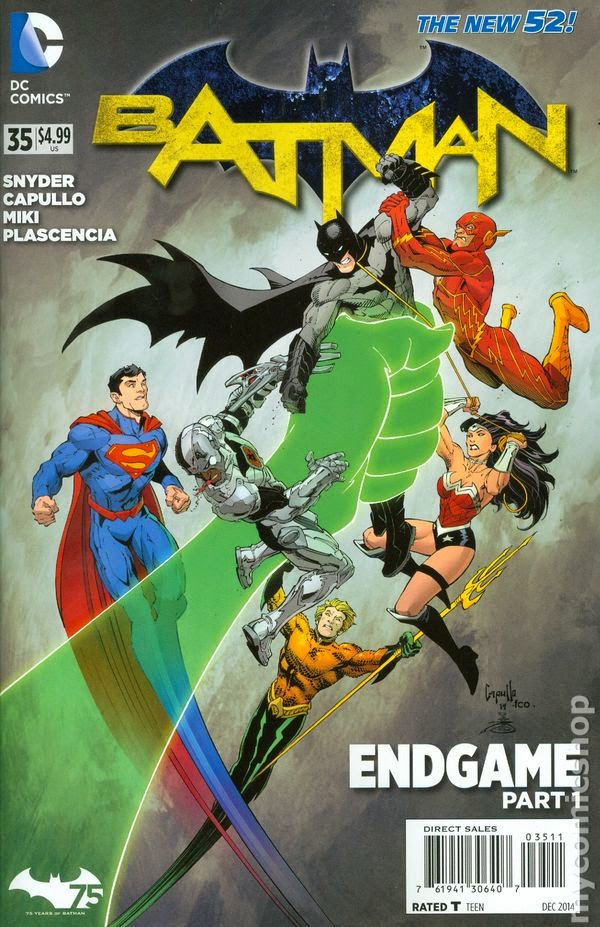 Written by Scott Snyder and James Tynion IV. Art by Greg Capullo and Danny Miki. Cover by Greg Capullo. From the superstar creative team that brought you a new start to the Caped Crusader comes the story that could end him. Be there in October for the biggest, deadliest and most epic story yet from writer Scott Snyder and artist Greg Capullo - 'Batman: Endgame' begins here! Cover price $3.99. 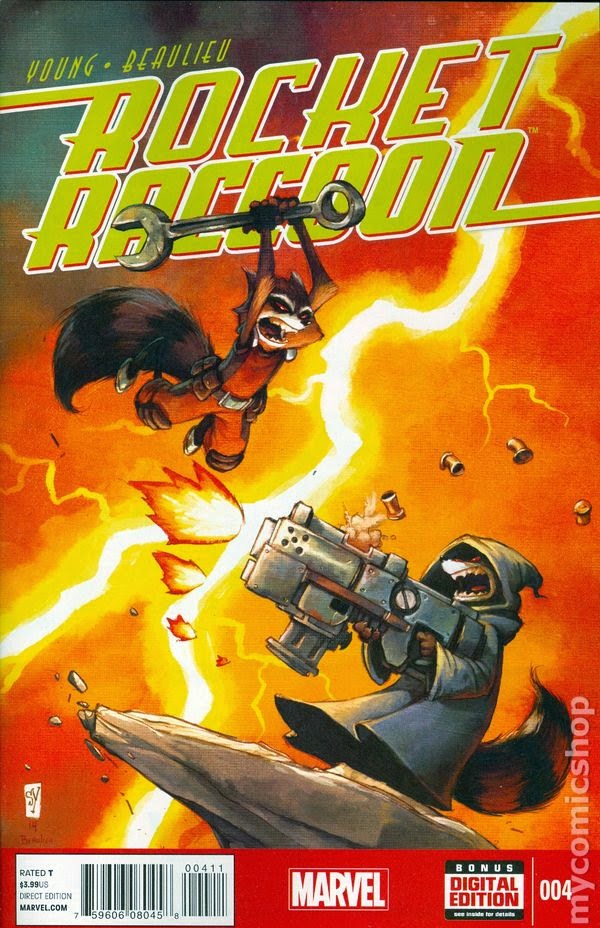 Story, Art and Cover by Skottie Young. THE FUR FLIES! Rocket and his dangerous doppelgänger face off! BETRAYED! Ensnared like some kind of terrestrial rodent, Rocket comes face-to-face-to-face-to-face-to-face with a few of the folks who want him dead! Can the everyone's favorite gunslingin' Guardian of the Galaxy make it out alive and clear his name? Rated T Cover price $3.99.
Posted by Enrique Rea at 12:10 AM