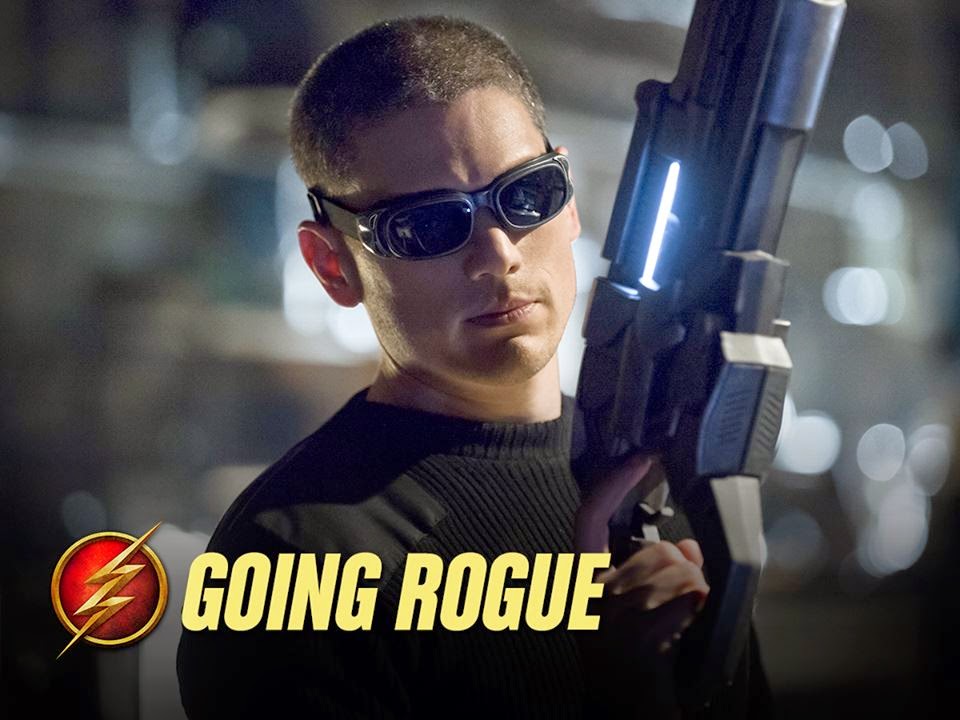 After taking on some tomato cans like an up-and-coming boxer trying to make a name for himself, The Flash comes across a formidable opponent in Leonard Snart. The Cisco-dubbed 'Captain Cold' brought some chilling sobriety to Team Flash as they realize they're not infallible in this week. Also, our favorite computer guru from Starling City, Felicity Smoak, makes a visit.

Wentworth Miller is devilishly cool and calm as Cold and determined to steal a rare diamond. And he's not letting his disgruntled co-horts get in the way even after a botched armored truck robbery that was foiled by the Flash. Emboldened by some ill-gotten weaponry from STAR Labs he opts to raise his 'game' and take 'The Streak' head on.

The show takes on a more serious tone as Cisco feels guilt over having developed the tech in the first place in case Barry Allen as the Flash became a threat. It was a refreshing turn of character to see some turmoil between the usually brilliant but goofy Cisco with Barry and Harrison Wells. It added some depth to the team dynamics and less comedic relief. As the team gels it also has to overcome some conflicts and that can only be a good thing. And just in time because Captain Cold looks to be around for awhile.

Felicity (Emily Bett Rickards) pays Barry a visit to see how he's recovering from his - wink, wink - lightning strike. The chemistry is instant and picks up from when Barry visited Arrow last season. While a sweet and endearing reunion the thought that these two belong together never leaves the mind. They acknowledge that at one point but these lovelorn super nerds have their hearts elsewhere. It's unfair that their time together emphasizes what's lacking in the relationship between Barry and Iris but the awkwardness there is clearly by design for the most part.

Despite some serious undertones in 'Going Rogue' what separates The Flash from its sister show Arrow is the inherent joy in its lead. Grant Gustin continues to shine as the enthusiastic hero who's brave but loyal and caring. Learning to multi-task he takes much excitement in trying to play chess, ping-pong and a board game in super speed. The playfulness with Felicity at Jitters during a trivia game is  even more endearing. This is the brightest non-cynical superhero story on television so far.

By the end of the episode we learn two things: the good Doctor Wells is one stern mentor and Captain Cold is recruiting. The Flash just keeps getting better.

The Flash 1x05 "Plastique" - After a bomb goes off downtown, the army, led by General Eiling (guest star Clancy Brown), rolls in and takes over the case, much to Joe’s (Jesse Martin) surprise. Suspicious, Joe tells Barry (Grant Gustin) that he and his friends at S.T.A.R. Labs should look into the army’s involvement. Wells (Tom Cavanagh) informs the team that Eiling was experimenting on his men to turn them into super soldiers. Cisco (Carlos Valdes) confirms one of Eiling’s soldiers, Bette Sans Souci (guest star Kelly Frye), was at the bomb site. The Flash tracks her down and realizes that she’s not setting off the bombs, she is a meta-human who can blow things up just by touching them. Meanwhile, when Joe learns Iris is writing about “the streak,” he tells Barry to make her stop. Barry realizes Iris won’t listen to him so he decides to have The Flash pay her a visit.