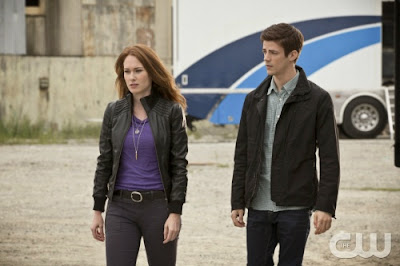 One of the great things about The Flash is its commitment to evolve and evolve quickly. In five episodes Barry Allen has accepted his role as hero with a responsibility to help others while still learning what he’s capable of. At the same time learning to deal with meta-humans who were also born out to the particle accelerator explosion. Initially, the obscure villains were designed to serve one purpose and that was to be early punching bags to essentially sharpen Barry’s skills. An undercard of purposely underdeveloped characters to serve as practice dummies. Then came the calculating Captain Cold, one of Flash’s longest running rogues, who was an actual equal foe we’ll see more of in the future. So not all meta-humans or villainous characters are created equal. The case in point is this week’s meta-human and human bomb, Bette Sans Souci aka Plastique (Kelly Frye).

At first she appears as just another destructive villain blowing up an office while stealing some documents. This leads to a great new test of Barry’s abilities as he races up the side of the building to save a dangling window washer. Funny how Barry’s scientific mind works when he always asks Caitlin and Cisco for the necessary speed to do things. The answer always remains “run as fast as you can”. The STAR Labs crew isn’t  the only one looking for this new explosive new character. General Eiling (Clancy Brown) is also on the hunt for her as it turns out she’s a vet of the Gulf War who was getting treatment for shrapnel when the accelerator exploded and the dark matter somehow changed her chemistry that allows her to make anything she touches an explosive device.


Instead of making her a rote villain she’s really more of a sympathetic figure who like Barry is adjusting to her new found powers. She doesn’t understand them but does know that Eiling has some nefarious intentions for her. We learn that Eiling and Harrison Wells were both trying to develop enhanced mental capabilities for the military before they had a falling out. Eiling is determined to harness Plastique’s power but thanks to the increasingly shady Wells he talks her into killing Eiling to stop him. Unfortunately, in the confrontation, Barry unintentionally distracts her allowing Eiling to shoot her . She’s about to explode and another amazing sequence has Barry carrying her out to sea sprinting atop the water. Despite a TV budget the special effects on the show are exceptionally well done. That was one of the concerns before the show premiered because it would take a great amount of effects to keep the scarlet speedster looking cheesy. The Flash effects team have surpassed expectations.

Barry and the Wests have a family dynamic that can be great (Joe and Barry) and not so great (Iris and Barry). Joe truly is the mentor and father-figure he needs to keep his head on straight and guide him as he develops into a more rounded hero. The exchanges between them have a heartfelt sincerity and chemistry that feels genuine thanks to the great work by Jesse L. Martin and Grant Gustin. Barry tells Joe he’s always carried a torch for Iris , Joe smiles and tells him he’s known for years. When Barry describes how he changes his voice by vibrating his vocal chords to keep Iris from recognizing it his hearty laughter is natural and normal.  This could be the best father-son relationship on any show.

With Iris on the other hand she has not developed as much as the other characters. Thankfully she gets more time this episode to find her place. She’s determined to follow ‘The Streak’ and post about him on her blog. This doesn’t please Joe or Barry as it puts her in danger when she’s racing to crime scenes to get the latest glance at him. A clever meet-up that paid homage to Superman and Lois Lane’s first meeting in ‘Superman: The Movie’ went the exact opposite way as Barry changed his voice, vibrated his face and zipped around the rooftop so Iris couldn’t get a clean look at him. He deplored her to stop following her but she remained determined to chase him. It probably would be easier to sit her down and explain that Barry is the Flash and her blog could expose her to more danger. And maybe they will because keeping her in the dark is not helping her character development at all.

It's good to know that the meta-humans they encounter are handled individually and the level of threats could increase. Like with Plastique there could be room for some development for other people with powers. Eiling is sure to return and continue his rivalry with Wells. We got a look at Gorilla Grodd in flashback before his transformation so somehow, someway there'll be a villainous talking ape on the show. If anyone can pull it off it's this show.

Until next time, cheers!

Check out scenes from next week's episode, The Flash is Born.


How do you fight a metahuman made of steel? Find out Tuesday on an all new episode of #TheFlash!
Posted by Enrique Rea at 12:31 PM