Another exciting week of comics have been released and there's too much good stuff to fit in one post. I mean on debuts alone there's Hellbreak by Cullen Bunn and Brain Churilla, Southern Cross by Becky Cloonan and Andy Belanger, The Surface by Ales Kot and Langdon Foss, Howard the Duck by Chip Zdarsky and Joe Quinones and Ninjak by Matt Kindt and Clay Mann. That's a pile full of goodness but wait, there's more!

If you're looking for longer reads and sink your teeth into some incredible trade paperbacks then Image Comics has you covered with two of the best. Copperhead Vol. 1 by Jay Faerber, Scott Godlewski and Ron Riley and The Humans Vol. 1 by Keenan Keller and Tom Neely. One's a fantastic police procedural set on another planet and the latter is an amazing alternative reality where apes rule the earth but mirrors the nation's volatile post-Vietnam era of the 1970s.

Then there's the awesome on-going titles that keep getting better and better. Postal #2 by Matt Hawkins, Bryan Hill and Isaac Goodhart, Spider-Gwen #2 by Jason Latour and Javier Rodriguez, King: Flash Gordon #2 by Ben Acker and Ben Blacker, Shaft #4 by David Walker and Bilquis Evely, East of West #18 by Jonathan Hickman and Nick Dragotta, and Ms. Marvel #13 by C. Willow Wilson and Takeshi Miyagawa should be books on your pull list. 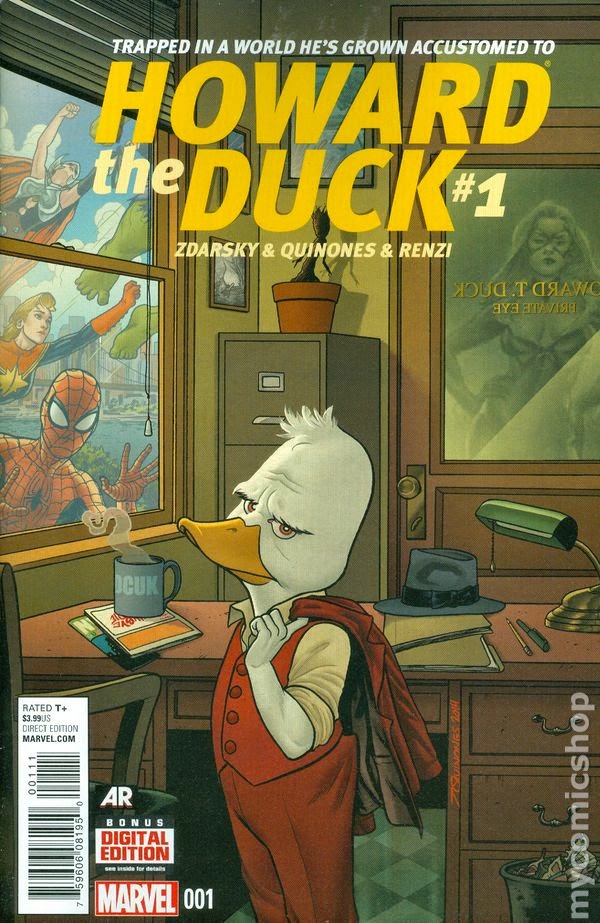 Written by Chip Zdarsky. Art and Cover by Joe Quinones. HOT off the pages of the … the post-credits scene at the … the end of a … popular movie … HOWARD THE DUCK is back! Join him as he takes on the weird cases that only a talking duck can crack as the Marvel Universe's resident private investigator! • Let CHIP ZDARSKY (a writer known mostly as an artist) and JOE QUINONES (an artist known mostly as a lover) guide you through his new world as he takes on THE BLACK CAT and MYSTERIOUS FORCES FROM OUTER SPACE! • WAUGH! Rated T+ Cover price $3.99. 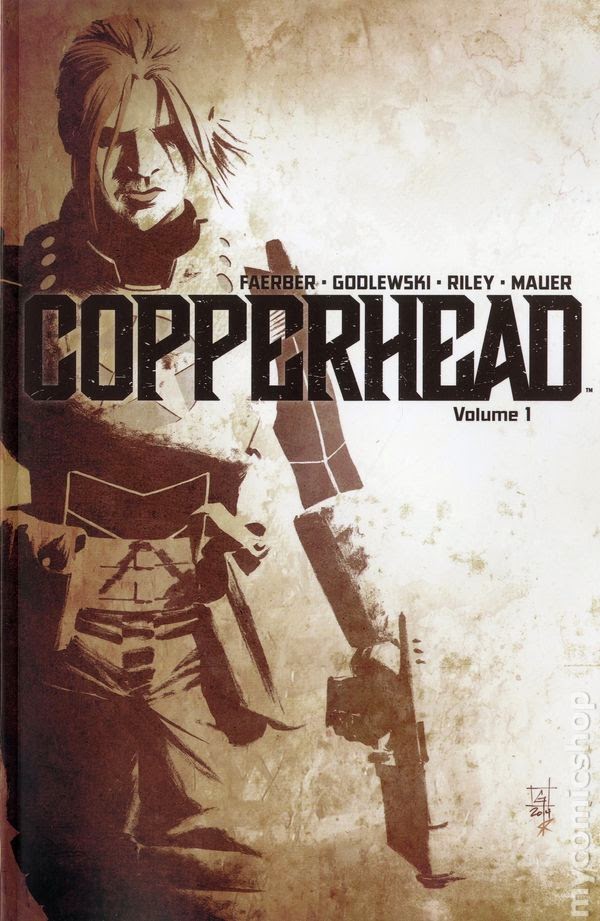 Volume 1 - 1st printing. "A New Sheriff in Town!" Collects Copperhead (2014) #1-5. Written by Jay Faerber. Art by Scott Godlewski. Cover by Scott Godlewski and Ron Riley. Welcome to Copperhead, a grimy mining town on the edge of a backwater planet. Single mom Clara Bronson is the new sheriff, and on her first day she'll have to contend with a resentful deputy, a shady mining tycoon, and a family of alien hillbillies. And did we mention the massacre? Softcover, 128 pages, full color. NOTE: "Copperhead is the best Image debut of the year and my favorite new comic." - Brian K. Vaughan (SAGA, Y - THE LAST MAN) Cover price $9.99. 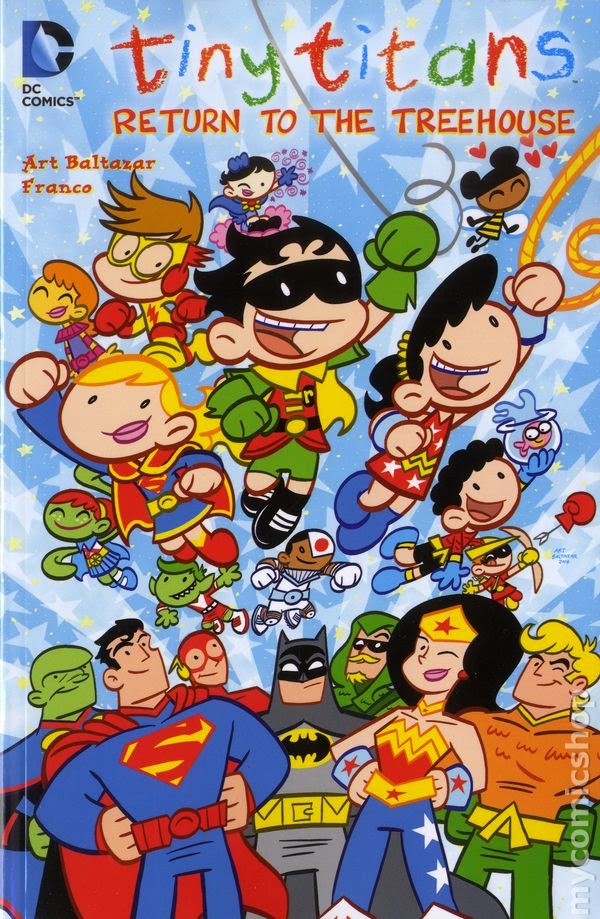 1st printing. Collects Tiny Titans: Return to the Treehouse (2014) #1-6. Written by Art Baltazar and Franco. Art and cover by Art Baltazar. The Eisner Award-winning series is back in this new title collecting the six-issue miniseries! Superboy and Supergirl return to the treehouse to discover...it's missing! Or is it just...really small? Who could have done such a thing? Find out as all your favorite Tiny Titans search for answers! Softcover, 128 pages, full color. All Ages Cover price $12.99. 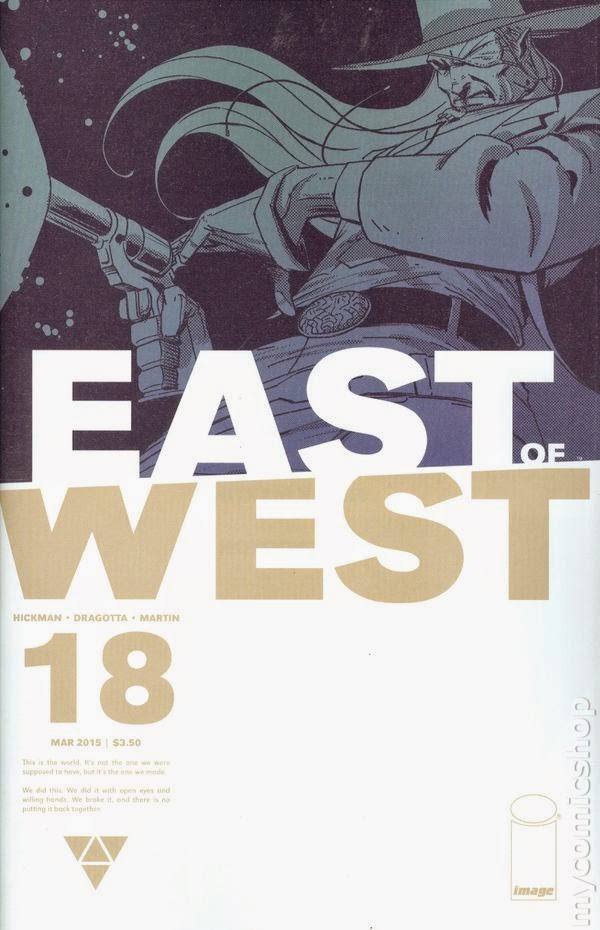 Written by Jonathan Hickman. Art and Cover by Nick Dragotta. 'THE PATH OF THE PROPHET' The last days of the world are upon us, and one man has become the living word of the apocalypse. This is the story of Ezra Orion and his unholy resurrection. Cover price $3.50. 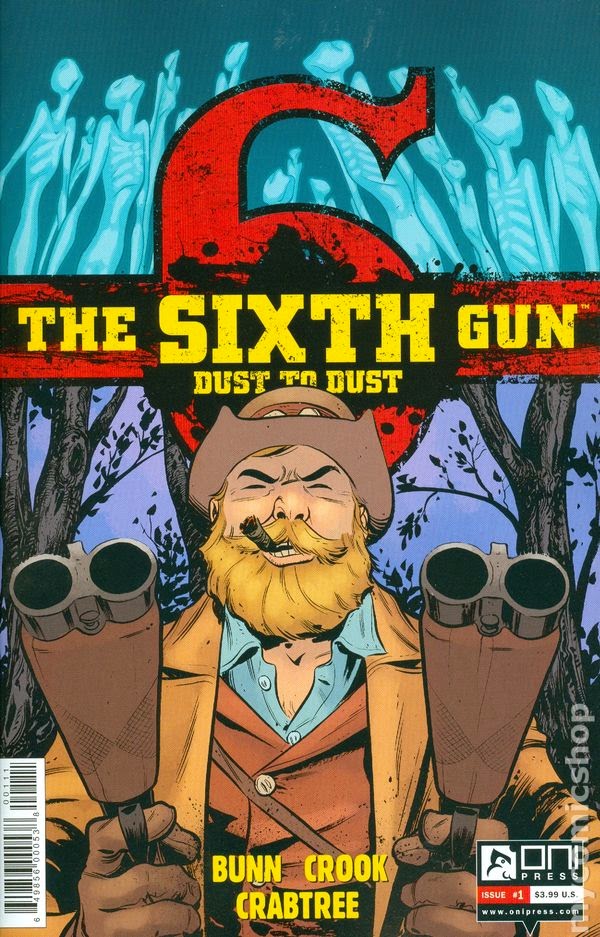 Written by Cullen Bunn. Art and Cover by Tyler Crook. We all know that the bounty hunter Billjohn O'Henry died at the battle of the Maw. But that death was not the end for him. Nor was it the beginning of his story. This yarn takes a look at a story from Billjohn's past as he embarks on a quest to save the life of his beloved Sally. Cover price $3.99. 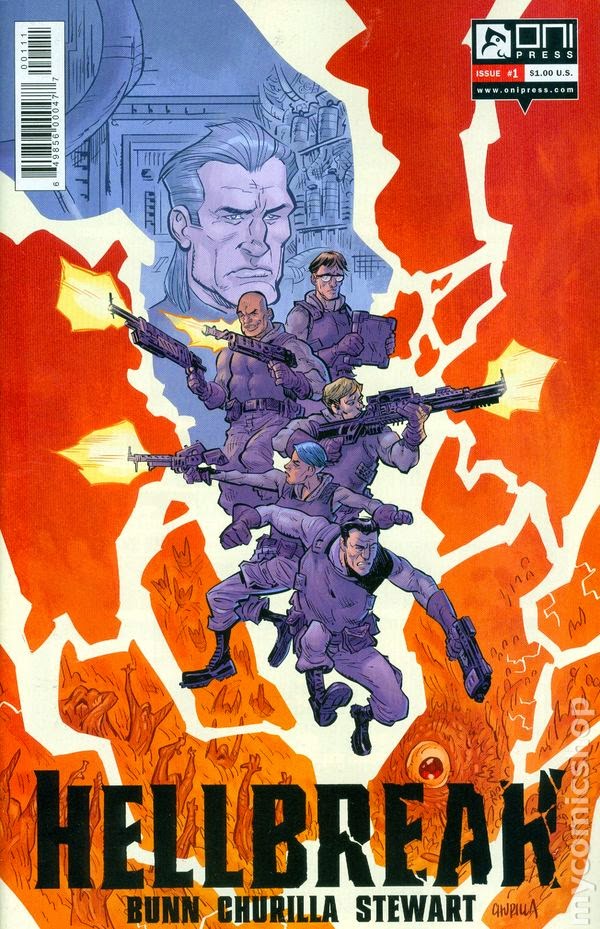 Written by Cullen Bunn. Art by Brian Churilla. Cover by Dave Johnson. There are thousands of Hells, each unique, each terrible. Mega-cities ruled by vicious gangs. Empires where the most perverse are well-respected. Wastelands roamed by prehistoric monstrosities. With the proper tools and know-how… you can infiltrate Hell whether you're dead or not. With the proper tools and know-how, you can break out. Project Kerberos has developed this forbidden technology, and a special forces extraction team is dispatched to rescue lost souls from the infernal realm. Cover price $3.99. 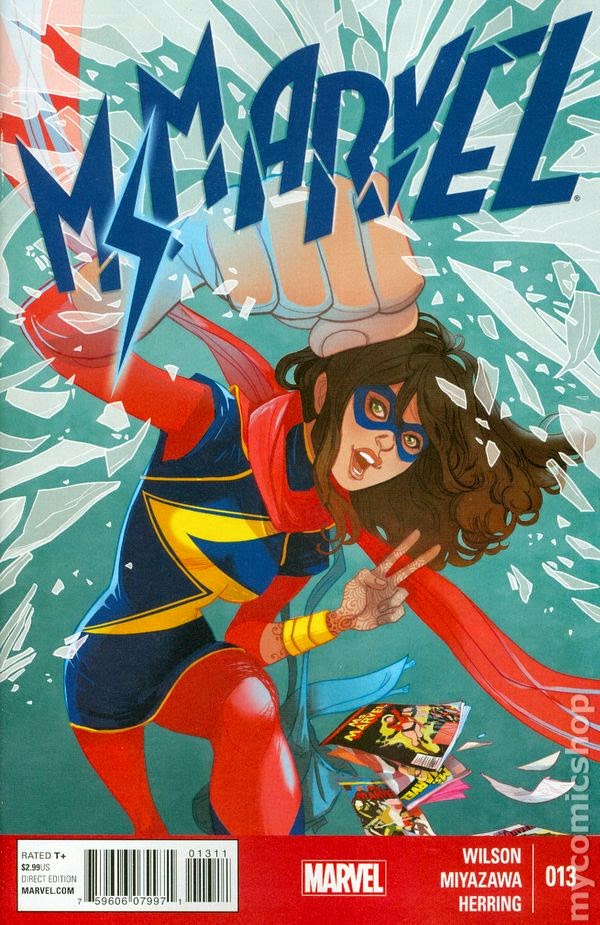 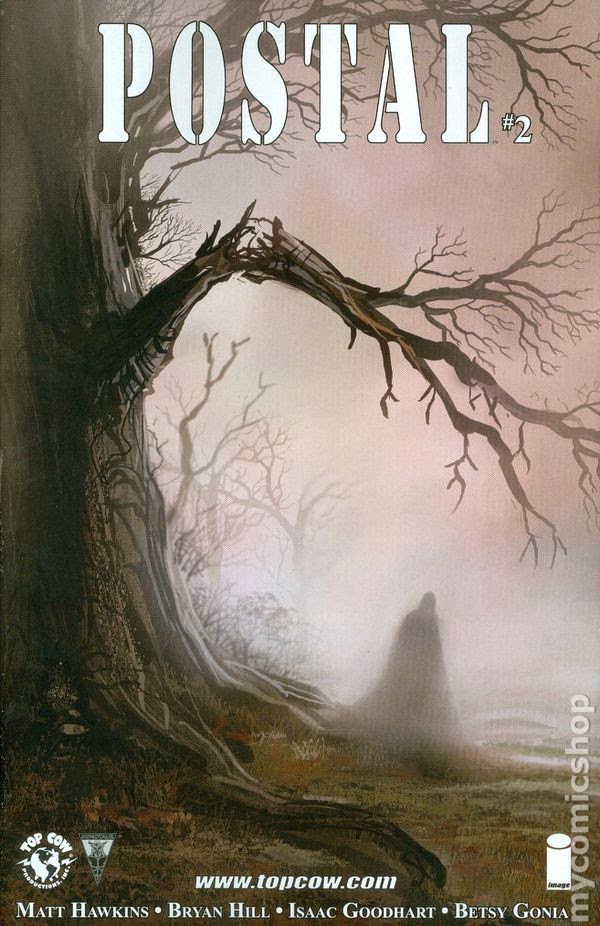 Written by Bryan Edward Hill and Matt Hawkins. Art by Isaac Goodhart. Cover by Linda Sejic. The fragile peace of a town full of criminals is shattered by the discovery of a murdered woman. When Mark seeks answers about her death and the people that could be behind it, he discovers the darkest secret at the heart of the town, a secret that alters his past forever. Cover price $3.99. Written by Brian Wood. Art and Cover by Jonboy. NEW TEAM! NEW DIRECTION! The return of Al Simmons, and the start of a brand new era for SPAWN! No one quite knows where Al's been all this time, but it's clear he's come back a changed man. Wiser, stronger, and with the memories from an experience that's he's still struggling to understand. Tucked away in a crime-ridden corner of New York City, he's beginning to forge new alliances, preparing defenses, and testing out his newly acquired powers... because there's a battle coming, and it's something that makes the Heaven/Hell thing seem like a petty squabble. So just who did Al piss off so badly while he was away? Introducing a bold new direction for SPAWN, as creator TODD McFARLANE hands the reins over to BRIAN WOOD (Star Wars, X-Men, DMZ) and JONBOY (Marvel Adventures, Araña). It all starts right here, and continues next month in SPAWN #251! Cover price $2.99. 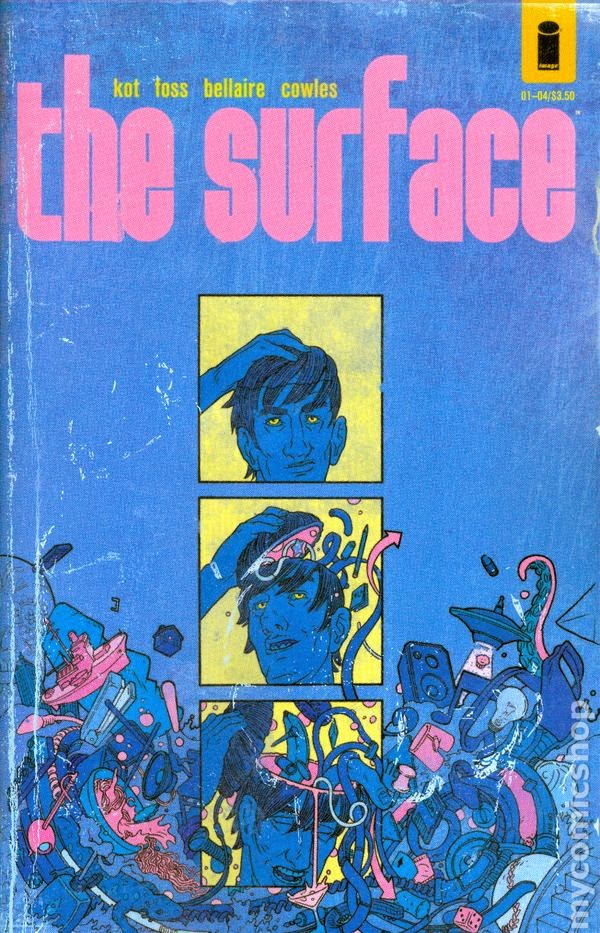 Written by Ales Kot. Art and Cover by Langdon Foss and Jordie Bellaire. What would happen if Moebius and District 9 had a baby? Maybe THE SURFACE! Welcome to Africa. Ebola is no longer a problem. The West and the East are moving in-and three hacker lovers are searching Tanzania for the place that can change everything: THE SURFACE! Cover price $3.50. 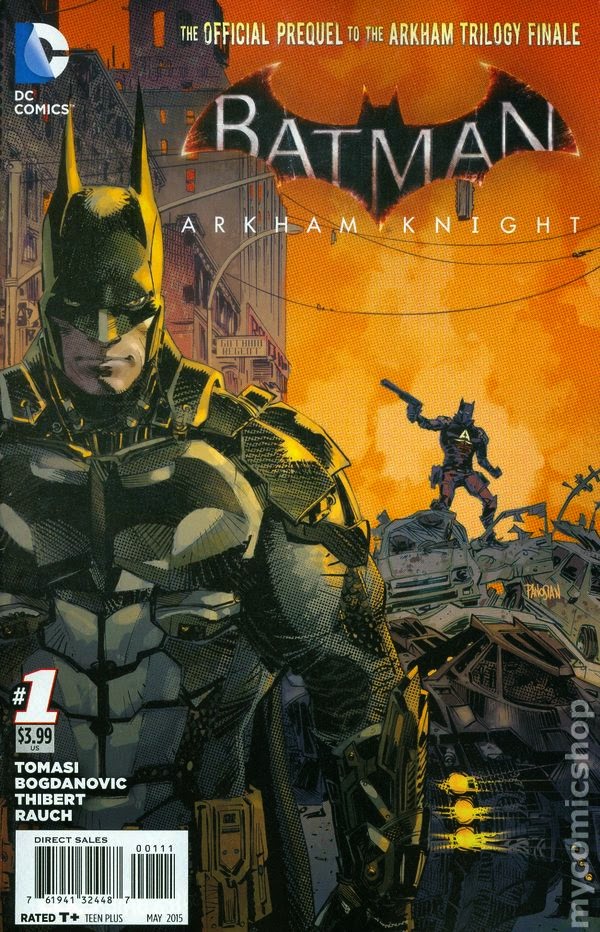 Written by Peter J. Tomasi. Art by Viktor Bogdanovic and Art Thibert. Cover by Dan Panosian. The Joker is dead. Arkham City is closed. As a new day begins, Bruce Wayne finds himself in devastating pain, recovering from his injuries and questioning whether his role as Batman is still necessary to the city's survival. But as the sun rises in Gotham City, dangerous new threats emerge from the shadows…and the Arkham Knight is just beginning. Don't miss this in-continuity prequel comic set prior to the events of the brand-new video game Batman: Arkham Knight! Cover price $3.99. 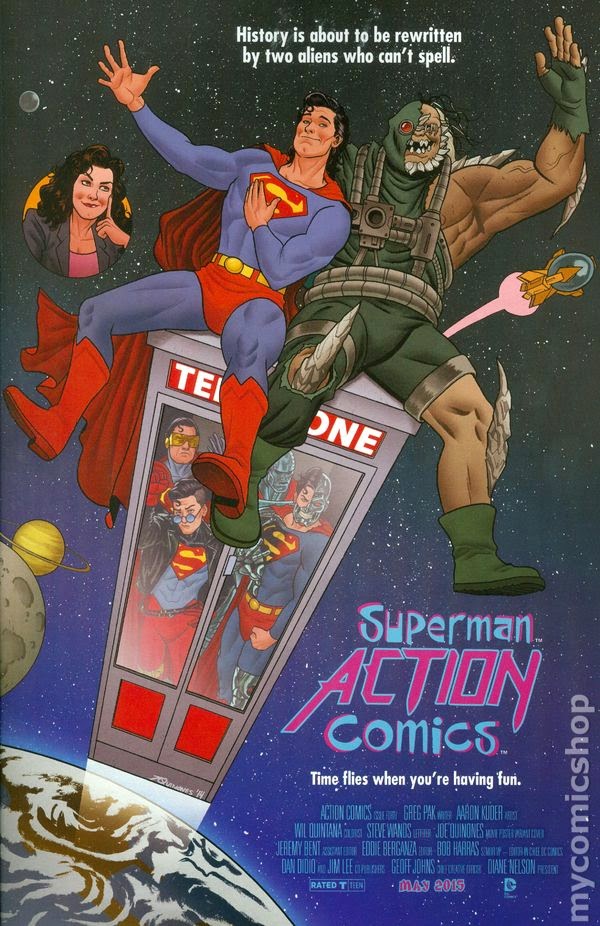 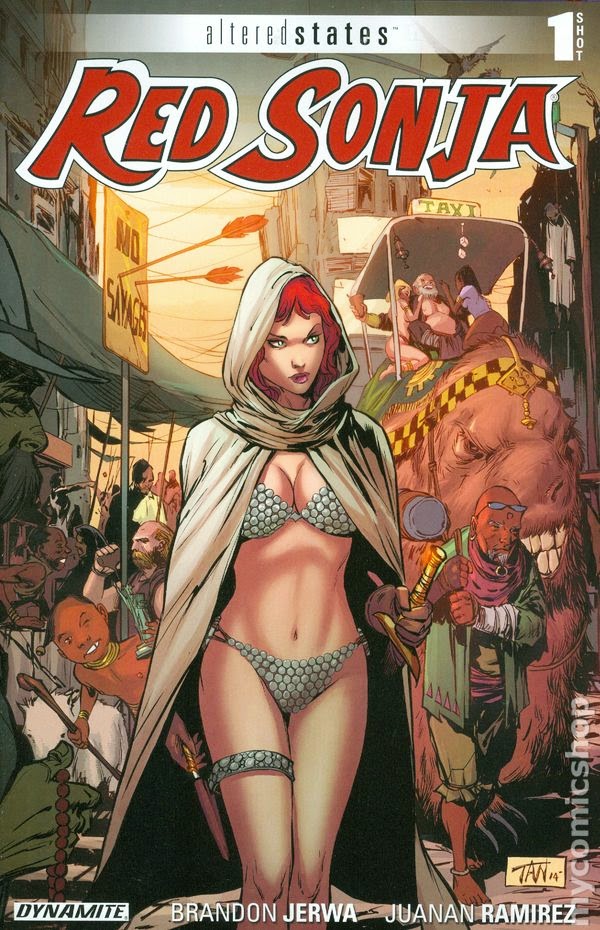 Written by Brandon Jerwa. Art by Juan Antonio Ramirez. Cover by Billy. Tan Welcome to Altered States… Dynamite Entertainment's parallel reality in the vein of DC's Elseworlds and Marvel's What If! Sonja Majeure is a young woman with a great job, procuring reliquary items for the Metropolitan Museum in New York City. Her latest exhibit features the sword of a long-lost warrior, a spell book, and the preserved remains of a sorcerer purported to be one of the most sinister beings to ever walk the Earth. When the ancient evil is awakened, Sonja will find that New York City has changed into a Hyborian wasteland... and Sonja herself will inherit the mantle of her namesake, the She-Devil with a Sword! Cover price $3.99. 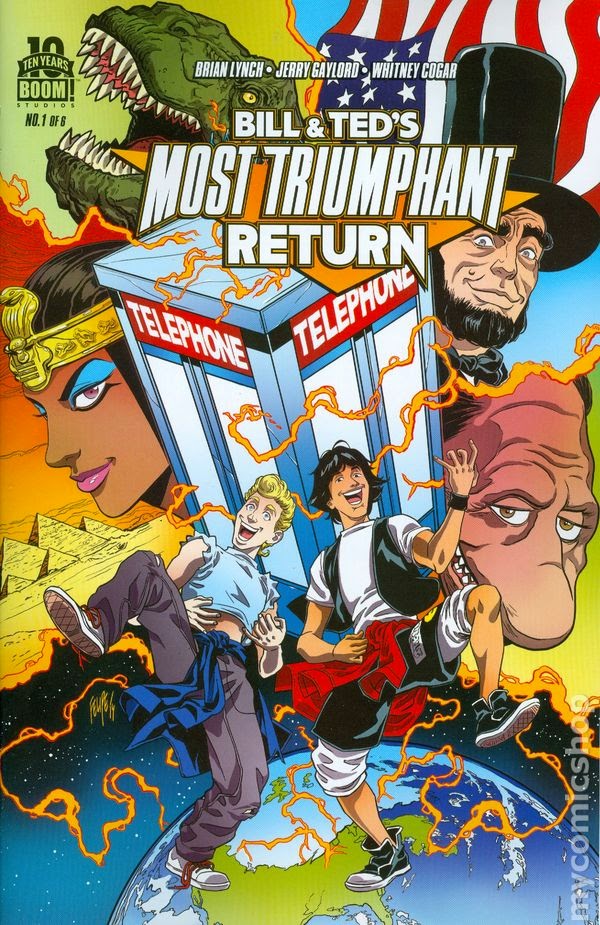 Written by Brian Lynch and Ryan North. Art by Jerry Gaylord and Ian McGinty. Cover by Felipe Smith. Following the time-traveling historic epic of Excellent Adventure and the turbulent life and death of Bogus Journey, Bill and Ted must now fulfill their destiny as the inspiration for galactic harmony! How can someone hate the Wyld Stallyns as much as the evil Chuck De Nomolos? With the power of time travel, Bill and Ted set their sights on turning a young 27th-century Nomolos' non-nonheinous attitude into something most outstanding and metal! Cover price $3.99. 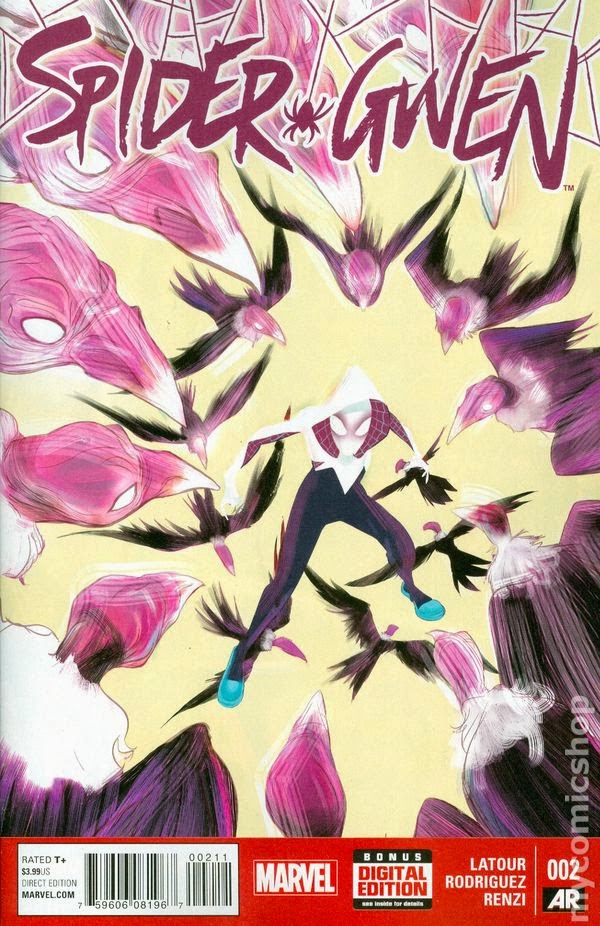 Written by Jason Latour. Art and Cover by Javier Rodriguez. WHO IS THE VULTURE?! Gwen finds herself between a rock (this vulture) and a hard place (the entire NYPD)! Don't miss this second issue of the Spider-Character who set the world on fire! Rated T+ Cover price $3.99. 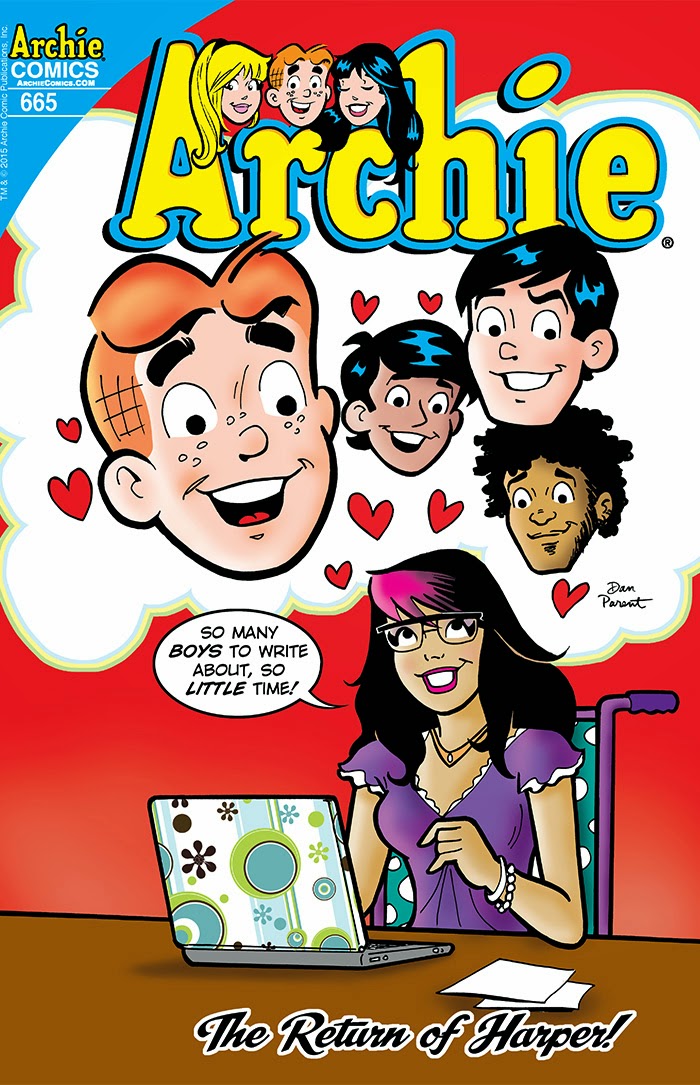 Written by Dan Parent. Art by Dan Parent and Rich Koslowski. Cover by Dan Parent. Harper Lodge returns to Riverdale and she's in the process of writing a new book. She only shares details of the book with her cousin Veronica, but Veronica lets it be known that the book is semi-autobiographical. When it turns out to be a romance featuring someone inspired by one of the boys from Riverdale, everybody wonders who the male love interest is based on! But the more the gang thinks they've got it figured out, the more wrong they realize they are! Who is Harper's tale about? Will the gang solve the mystery? Find out in 'Writer's Blockheads'! Cover price $3.99. 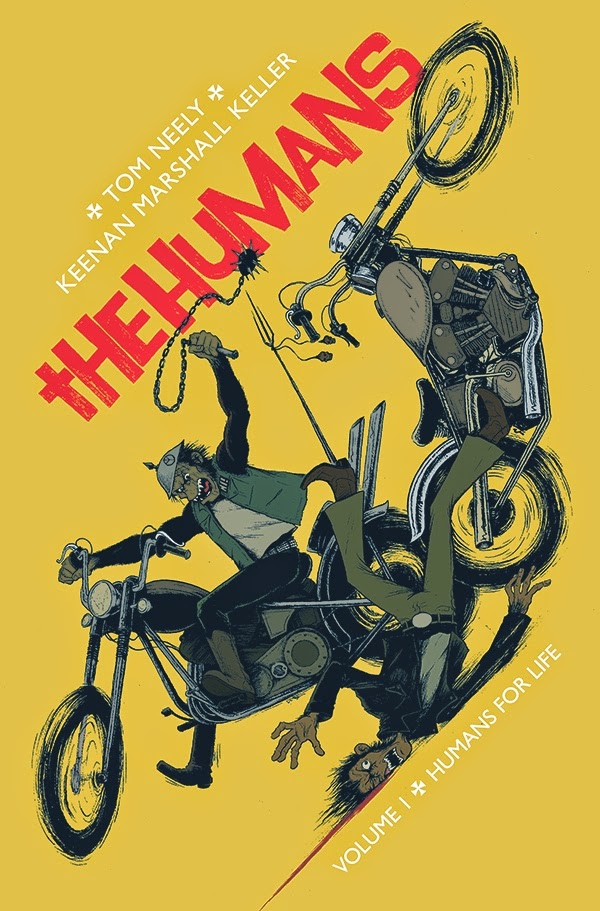 Volume 1 - 1st printing. "Humans for Life!" Collects Humans (2014 Image) #1-4. Written by Keenan Keller. Art and cover by Tom Neely. Follow the Humans as they deal out beatings, cook drugs, party endlessly, and struggle to keep their turf and status amongst the numerous outlaws, rival gangs, and bonafide killers. All of whom are trying to take their spot at the top of the heap. Plus: pin-ups by BENJAMIN MARRA, JOHNNY RYAN, SKINNER, KATIE SKELLY, KRISTINA COLLANTES, BELA DEHM, and some other goodies thrown in too. RIDE OR DIE! READ OR DIE!!! RIP UP THE STREETS!!!! HUMANS FOR LIFE! HUMANS TIL DEATH!!! Softcover, 144 pages, PC/PB&W. Mature Readers Cover price $9.99. 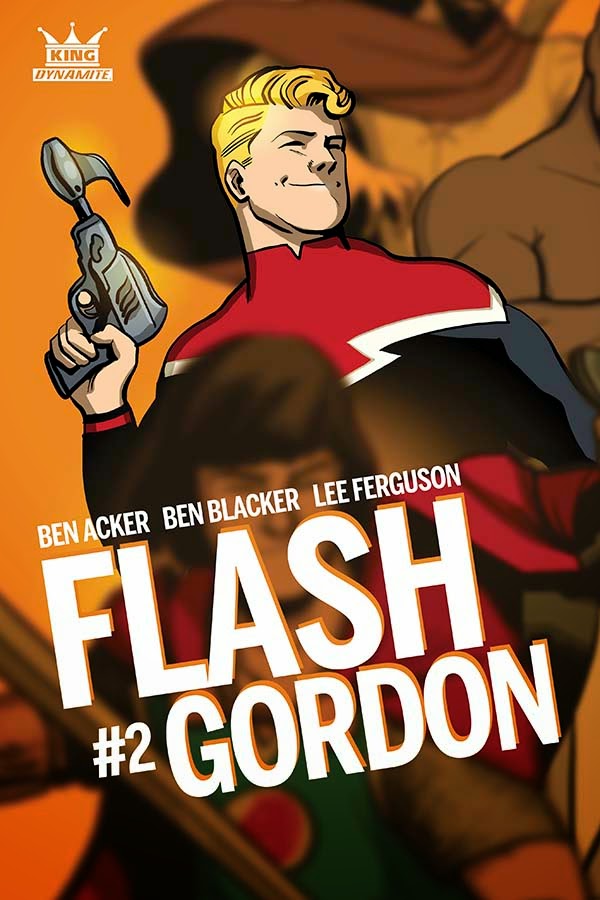 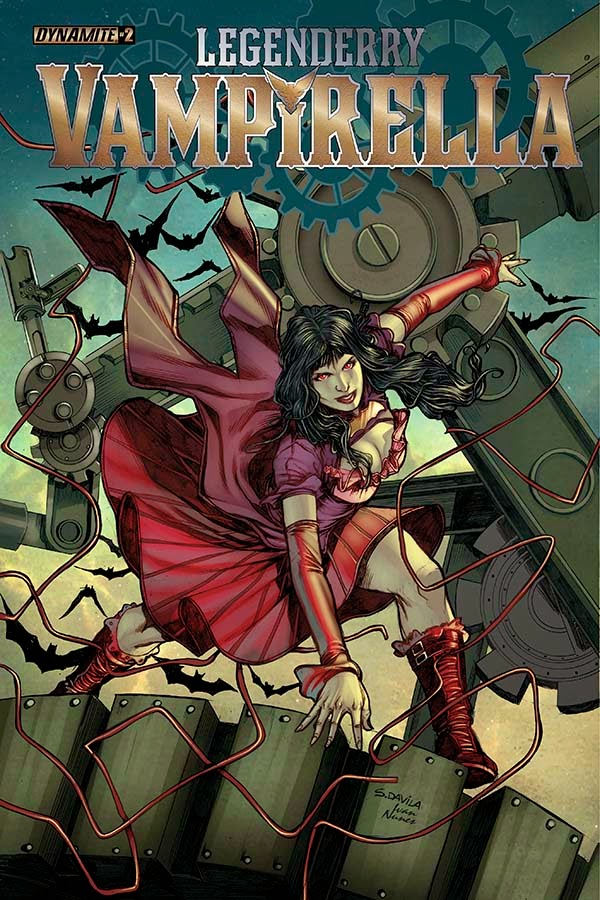 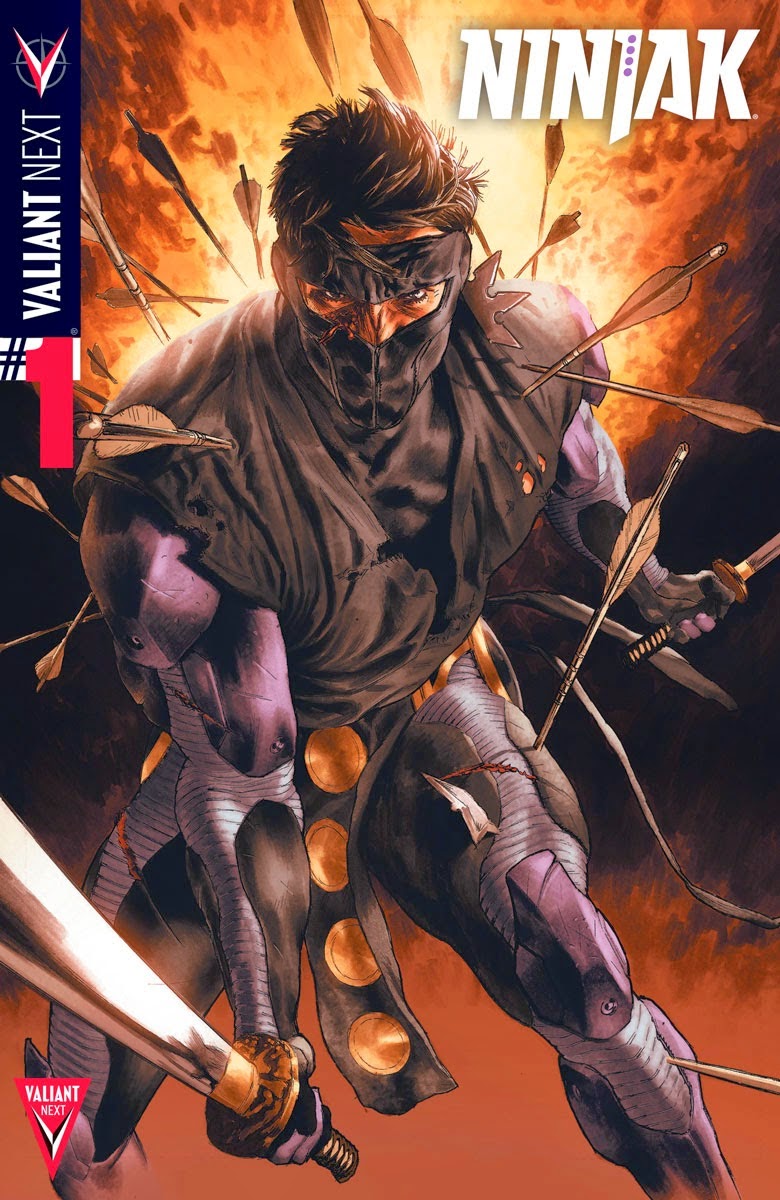 Written by Matt Kindt. Art by Clay Mann and Butch Guice. Cover by Clay Mann. For the first time, Ninjak's past and future collide in the pages of an all-new ongoing series! Then: Meet inexperienced MI-6 recruit Colin King on his first mission in the field as he learns the basics of spycraft and counterintelligence, and develops a volatile relationship with his first handler. Now: Colin King is Ninjak, the world's foremost intelligence operative, weapons expert, and master assassin. And he's hunting the Shadow Seven - a secret cabal of shinobi masters with mysterious ties to his training and tragic past. Cover price $3.99. 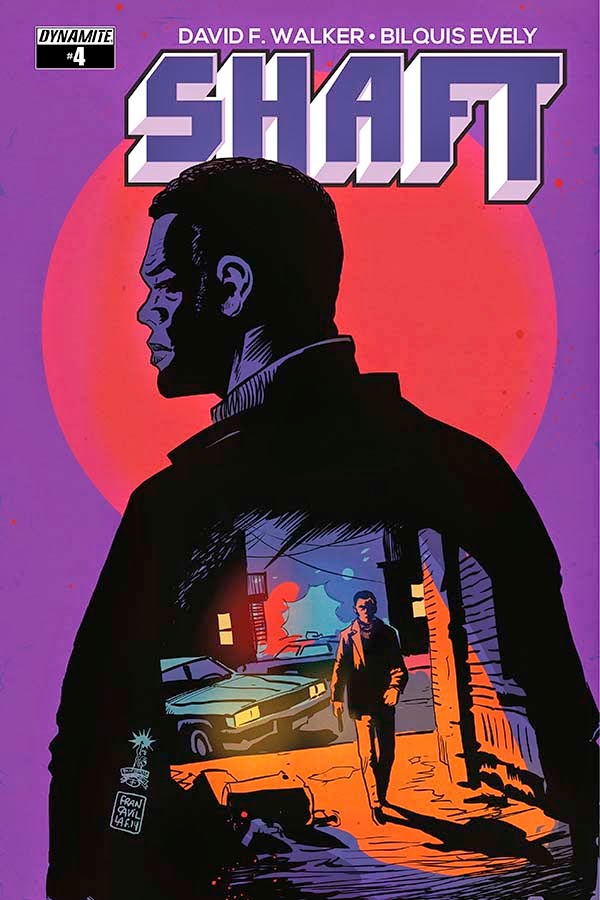 Written by David Walker. Art by Bilquis Evely. Cover by Bill Sienkiewicz and Denys Cowan. John Shaft is a ticking time bomb of vengeance waiting to explode. Before the killing starts, however, he wants answers. Consumed by rage, he returns to the place he hates the most-his childhood home-where his personal demons continue to haunt him. When unfriendly faces from his past appear, Shaft realizes that getting his revenge will require forming allegiances with his enemies. Cover price $3.99. 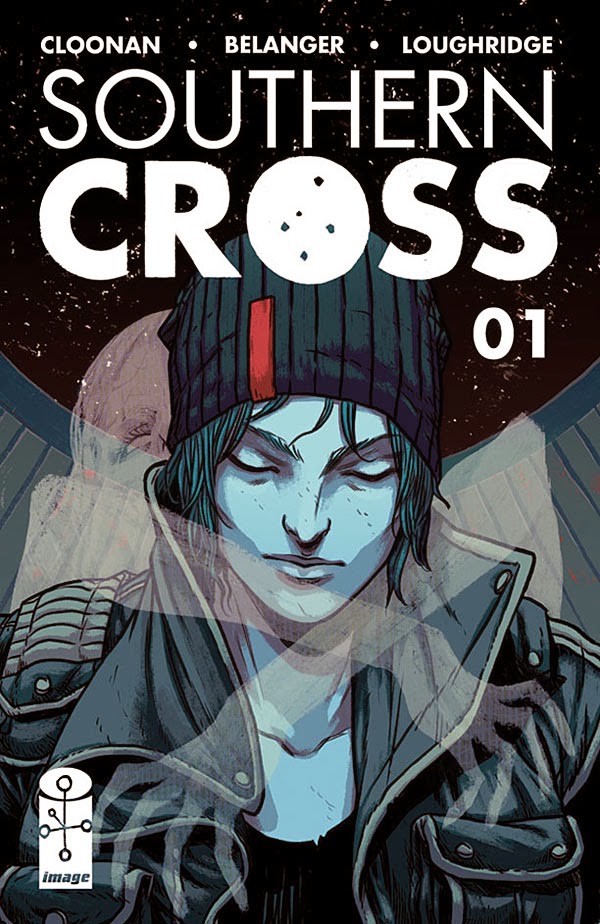 Written by Becky Cloonan. Art by Andy Belanger. Cover by Becky Cloonan. NOW BOARDING: Southern Cross, tanker flight 73 to TITAN! Alex Braith is on board retracing her sister's steps to the refinery moon, hoping to collect her remains and find some answers. The questions keep coming though-how did her sister die? Where did her cabin mate disappear to? Who is that creep across the hall? And why does she always feel like she's being watched? Inspired by classic mysteries and weird fiction, SOUTHERN CROSS is a crucible of creeping anxiety and fear as Braith struggles with the ghosts of her past on board a ship that holds secrets best kept buried. Cover price $2.99.