With only 8 days until the San Diego Comic-Con now is a good time to pick up some great comic books before the onslaught of announcements begins to pour out of the event. This is the time to cherish what made SDCC an important convention - comics. So before we all get lost in the hoopla of movie panels and video game announcements hit up your local comic book shop and buy one of these fine titles made by some talented human beings. 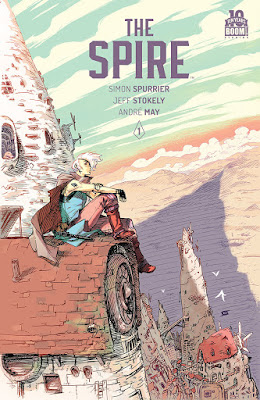 Written by Simon Spurrier. Art and Cover by Jeff Stokely. The Spire is a mountain of metal and stone that rises out of the middle of the desert, containing a vast city of twisting tunnels, grinding elevators, and ancient machinery, and home to over a million human and non-human residents. Shå, the last of the Medusi, is responsible for keeping watch over them as Commander of the City Watch, despite the fact she isn't shown any respect due to her race. When a string of grisly murders is committed just as a new Baroness of the Spire is about to be sworn in, Shå will have to find the serial killer and bring them to justice. But the new Baroness has a deep hatred of non-humans, and Shå will have more than one enemy at her back. Cover price $3.99. 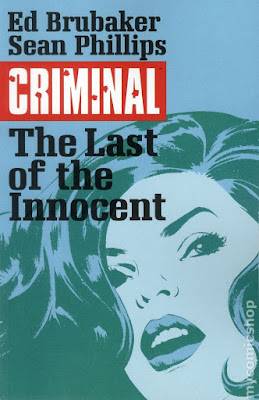 Image Edition - Volume 6 - 1st printing. "The Last of the Innocent!" Collects Criminal: Last of the Innocent (2011 Marvel) #1-4. Written by Ed Brubaker. Art by Sean Phillips. The best-selling crime comic finally returns, and with their most ambitious story yet. Obsession, sex, money, murder, and nostalgia for days long past all collide in THE LAST OF THE INNOCENT. Riley Richards got it all... The hottest girl in school and a ticket to the big time... so why isn't he happy now? Why is he getting involved in gambling and drugs and shady characters in the city? Why can't he forget the life he left behind in small town Brookview? And why is he suddenly plotting murder? Softcover, 120 pages, full color. Mature Readers Cover price $14.99. 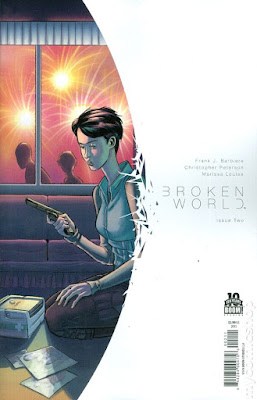 Written by Frank J. Barbiere. Art and Cover by Christopher Peterson. With the world falling apart around her, Elena finds one of the government-issued suicide kits and is torn between ending her life and fighting for one last chance to reconnect with her family. Cover price $3.99. 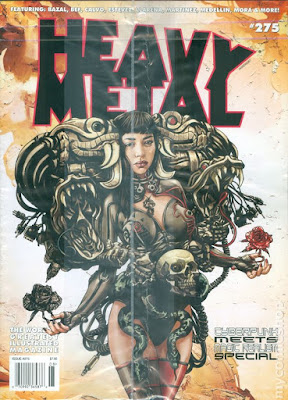 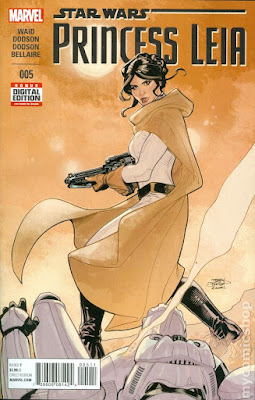 Written by Mark Waid. Art and Cover by Terry Dodson. LAST STAND IN THE NAME OF ALDERAAN! The rebel Princess leads her people against the Empire! The conclusion to Leia's most personal mission! Rated T Star Wars Lucasfilm Ltd. & TM. All rights reserved. Used under authorization. Text and illustrations for Star Wars are 2015 Lucasfilm Ltd. Cover price $3.99. 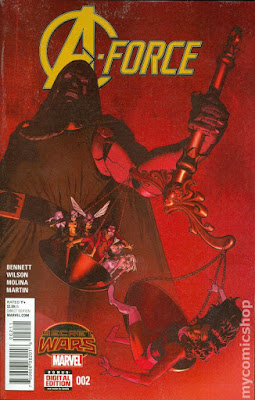 Secret Wars: Warzones - Written by C. Willow Wilson and Marguerite Bennett. Art and Cover by Jorge Molina. With monsters appearing on the utopian island of Arcadia and threatening its inhabitants, She-Hulk and her team of Avengers set out to discover the source. But when they stumble upon a conspiracy that reaches far beyond Arcadia, She-Hulk may just find herself on the wrong side of the law! Rated T+ Cover price $3.99. 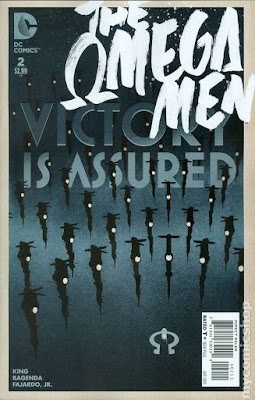 Written by Tom King. Art by Barnaby Bagenda and José Marzan. Cover by Trevor Hutchinson. What do you do after the entire galaxy watches you murder the White Lantern Kyle Rayner? Run. Cover price $2.99. 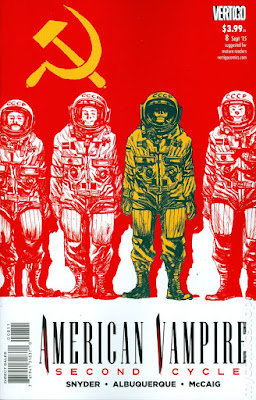 Written by Scott Snyder. Art and Cover by Rafael Albuquerque. With Skinner and Calvin leading the space race, back on Earth it's time to face the most guarded stronghold in the country: Area 51! Felicia and Pearl go behind the fence to expose the nation's extraterrestrial secrets. What do they encounter floating in the test tubes? Find out here! Cover price $3.99. 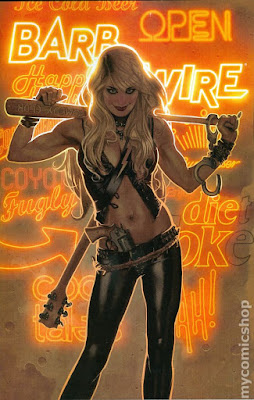 Written by Chris Warner. Art by Pat Olliffe and Tom Nguyen. Cover by Adam Hughes. Nail-hard tough and drop-dead gorgeous, Barb Wire is the baddest bounty hunter on the mean streets of Steel Harbor, where gangsters can lift bulldozers and leap rusting factories in a single bound. The hunting is stupid good and the bounties are hella big - if Barb lives long enough to collect! Cover price $3.99. 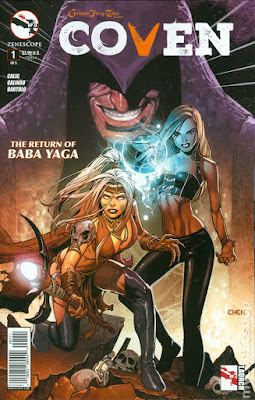 Written by Ralph Tedesco & Various. Cover by Sean Chen. Modern Day 2015, a group of unsuspecting women are attacked in their New England home and burned at the stake. The men responsible call themselves the New Crusaders and they are determined to find a woman named Avril Williams, a young witch more powerful than anyone could ever imagine. It's a race against time as Baba Yaga returns in one of the most intense and exciting Grimm Universe titles of 2015! Cover price $3.99. 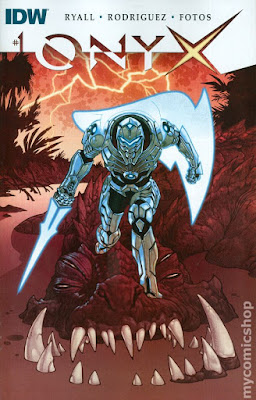 Written by Chris Ryall. Art and Cover by Gabriel Rodriguez. From deepest space comes the cyborg warrior Onyx… but has she come to Earth in its time of dire need to save it or to end it? A star-born knight for a new generation takes flight here! Cover price $3.99. Zipman does his best to stop evil at every turn, but his methods are a subject of heavy debate. Now, while Zipman’s leadership is trying to keep him controlled, one member prepares to take his attack to the next level. Its been said recently that independents shouldn’t be writing superhero books, we’ll see about that. Comixology release. 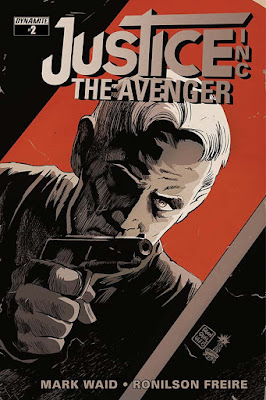 Written by Mark Waid. Art by Ronilson Freire. Cover by Francesco Francavilla. Richard Benson confronts the Invisible Death - but not before more killers can invade the headquarters of Justice, Inc. and take the fight to Benson's own doorstep! Alone and unaided, Benson's agents have to defend their fortress. Mark Waid, the industry heavyweight award-winning writer behind Kingdom Come and Daredevil, continues his latest tour-de-force with the pulp hero he's waited his entire lifetime to write! Cover price $3.99. 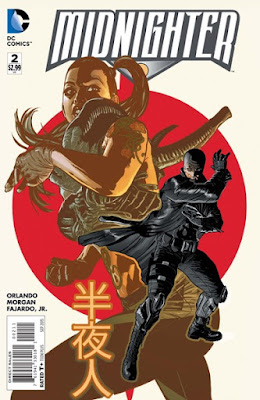 Written by Steve Orlando. Art and Cover by Aco Marina. Lucas woke up this morning as a suburban martial-arts instructor…but when God Garden tech unexpectedly falls into her lap, she'll end the day as the deadliest woman on the planet! That's bad news for her - and worse for the Midnighter! Cover price $2.99. 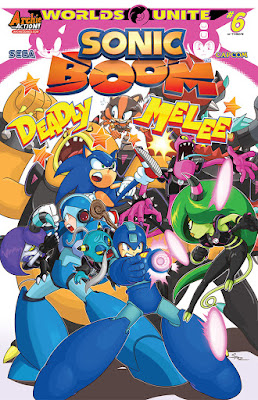 Worlds Unite Act II: Part 6 - Written by Ian Flynn. Art by Edwin Huang and Gary Martin. Cover by Patrick Spaz Spaziante. The Sonic/Mega Man crossover event goes boom! 'Worlds Unite,' Part Six: The war against Sigma has been waged! Sonic, Mega Man and X lead their unified friends against hordes of mechaniloids led by the armored, super-powered Deadly Six! That sounds pretty scary and exciting, and now is definitely the time for everyone to work together and pay close attention. Especially Sticks. She tends to do some distracting stuff, like falling off the Sky Patrol and landing into a Genesis Portal or something-wait? Did she really? You won't believe where Sticks lands! Story continues in Sonic the Hedgehog #274! Cover price $3.99. 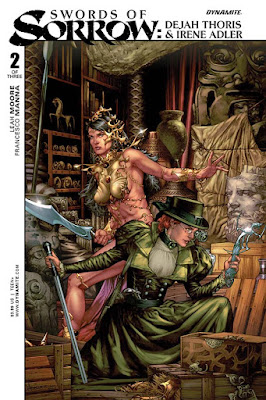 Written by Leah Moore. Art by Francisco Manna. Cover by Jay Anacleto. On Barsoom, the Princess of Helium is missing, and Irene Adler is the number one suspect. As Adler struggles to maintain her liberty and capture her own quarry, there are now two Martians roaming the dark, puddled streets of London, and Princess Dejah Thoris is not dressed for the weather. Cover price $3.99. 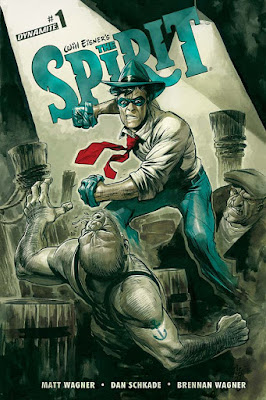 Written by Matt Wagner. Art by Dan Schkade. Cover by Eric Powell. In celebration of the 75th anniversary of Will Eisner's iconic and ground-breaking character, Dynamite Entertainment is proud to present an all-new ongoing series featuring THE SPIRIT. Scripted by Eisner Award-winning author, Matt Wagner, this monthly title will delight longtime fans as well as help introduce a whole new generation of fans to the character. Set in the classic period of The Spirit's golden age, the 1940s, the first 12-issue story arc follows the strip's most beloved characters, Commissioner Dolan, his daughter Ellen, Ebony White and Sammy as they attempt to un(CA) why The Spirit has been missing, and presumed dead, for the past two years. Has the famous blue-masked hero finally fallen victim to one of the malicious felons or beautiful femme fatales from his lengthy rogues' gallery of enemies? In the words of Central City's most prominent headlines: 'WHO KILLED THE SPIRIT?' Illustrated by Dan Schkade and colored by Brennan Wagner, this series will strive to honor the vital and prestigious legacy of one of comicdom's most talented and influential creators - Will Eisner. Cover price $3.99. 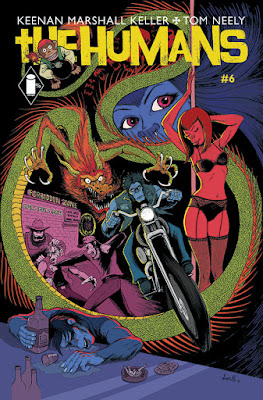 Written by Keenan Keller. Art and Cover by Tom Neely. Drinking all day at a strip club leads Johnny to some unwanted attention from the locals. All the while a turn-coat makes a play to rat out The HUMANS. Cover price $2.99. 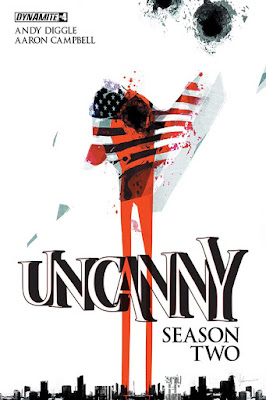 Written by Andy Diggle. Art by Aaron Campbell. Cover by Jock. Holly learns she's been playing for the wrong team, Weaver dis(CA)s the truth about the night his father was shot, and together they edge closer to locating the source of their uncanny powers. Andy Diggle (Six Guns, The Losers) continues the tale of Dominic Weaver, the man with six billion borrowed skill sets… a con-man with supernatural abilities, drawn into a global conspiracy! Cover price $3.99. 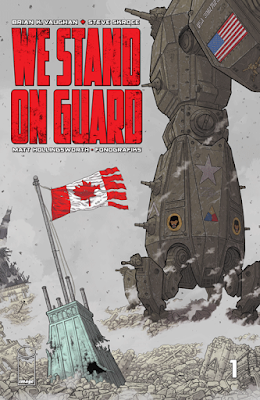 Written by Brian K. Vaughan. Art and Cover by Steve Skroce. 100 years from now, a heroic band of Canadian civilians must defend their homeland from invasion...by the United States of America! The hyper-detailed combat between badass freedom fighters and giant f***ing robots begins with a spectacular 40-PAGE FIRST ISSUE for the regular price of just $2.99! Cover price $2.99.