It's new comic book release day and it's another stellar batch of notable comics in today's rundown. The blockbuster reboot of Archie, 'Archie' #2, has arrived. 'Burning Fields' #7 with its penultimate issue. Momma Shiffron takes over in 'Postal' #6. Pick up the final issue of 'Swords of Sorrow: Vampirella & Jennifer Blood' #4. Fall in love with Secret Wars: Secret Love' #1.'Princeless: Raven the Pirate Princess' #2 is off and running. So much good stuff! 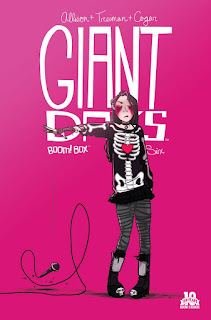 Written by John Allison. Art and Cover by Lissa Treiman. Final issue! As everyone buckles down for exams, we get a good look into Susan's mysterious past. Cover price $3.99. 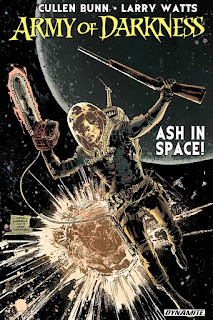 1st printing. Collects Army of Darkness (2014 Dynamite) Volume 4 #1-5 and #1992.1. Written by Cullen Bunn. Art by Larry Watts. Cover by Gabriel Hardman. As the Chosen One, Ash has seen some strange things and visited some strange times and places... but nothing has prepared him for this. Catapulted into the depths of space, Ash must confront the Deadites in a place where no one can hear his screams... or his chainsaw... or his boomstick! What do the forces of the evil dead want with the International Space Station? Whatever it is, Ash embarks on his most out-of-this-world adventure in order to stop them! Cover price $19.99. 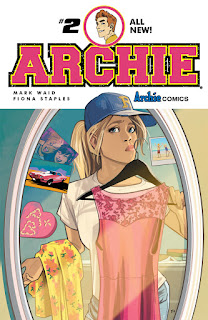 Written by Mark Waid. Art and Cover by Fiona Staples. Comic superstars Mark Waid and Fiona Staples continue their reimagining of an icon! The new school year continues to bring with it daunting new challenges and interesting changes for the teens of Riverdale High. But there's one thing that remains constant: Archie's car is still a piece of garbage! With car problems comes money problems, which means that Archie's on the hunt for a new job. Fortunately, a mysterious new building in Riverdale is offering some career opportunities for Archie and his friends. Who's behind this new conglomerate and what are their intentions for Riverdale? Find out in the second issue of this all-new Archie series! Cover price $3.99. 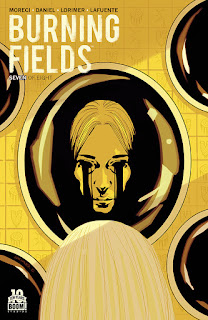 Written by Michael Moreci and Tim Daniel. Art and Cover by Colin Lorimer. After barely escaping the massacre of Carapace troops by the now Asag-controlled Decker and Verge, Dana and Aban find solace with Aban's family. Cover price $3.99. 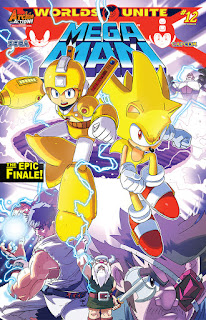 Worlds Unite: Part 12 - Written by Ian Flynn. Art by Tyson Hesse and Jim Amash. Cover by T.Rex. The Sonic/Mega Man Crossover sequel comes to a chaotic close with 'Worlds Unite' Part Twelve: The grand finale to 'Worlds Unite' sees our super-powered heroes Sonic and Mega Man face off against the evil Sigma in his final, most lethal form! If that wasn't enough, the Genesis Portal-ravaged reality is falling apart and time is running out to fix it! You don't want to miss the stunning conclusion to the biggest crossover event of the year! Featuring the worlds of Street Fighter, Skies of Arcadia, Nights Into Dreams, Okami, Ghosts 'n' Goblins, Alex Kidd, and more! Cover price $3.99 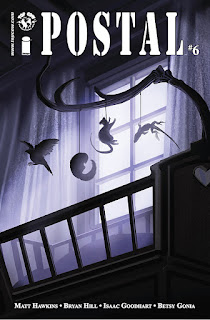 Written by Bryan Edward Hill and Matt Hawkins. Art by Isaac Goodhart. Cover by Linda Sejic. How does a small town stay completely off the grid? This issue shows how while Mark discovers just what it means to love someone. Cover price $3.99. 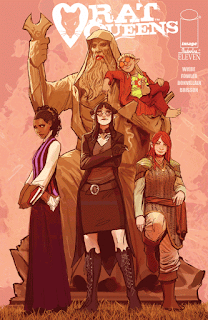 Written by Kurtis J. Wiebe. Art by Tess Fowler. Cover by Stjepan Sejic. 'DEMONS' Road Trip! Having survived the end of the world, the Queens follow Hannah back to where it all began: Mage University. With Necromancers being hunted by a mysterious cadre of religious zealots, Hannah will see to it that the Council of Ten, the overseers of the mage community, do something about it. Cover price $3.99. 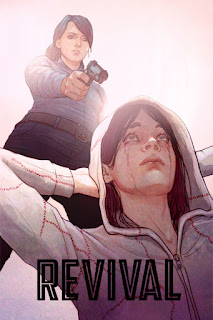 Written by Tim Seeley. Art by Mike Norton. Cover by Jenny Frison. Tensions rise as sisters Em and Dana face off over Blaine Abel, and General Cale tries to solve the mystery of the 'Creeps,' with horrific consequences. Cover price $3.99. 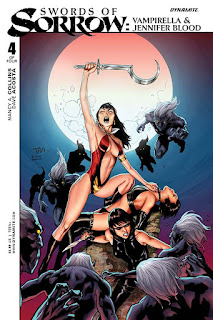 Written by Nancy A. Collins. Art by Dave Acosta. Cover by Billy Tan. In the final issue of this ground-breaking mini-series, 'The Vampire and the Vigilante', two of the Dynamite Universe's most dangerous female characters must put aside their differences in order to combat a common enemy determined to destroy them. While Jennifer Blood must figure out how to kill legions of the Prince's un-killable Shard Men, Vampirella throws down against fellow-bloodsucker Chastity to decide, once and for all, who is the greatest female vampire-turned-vampire hunter of all time! Cover price $3.99. 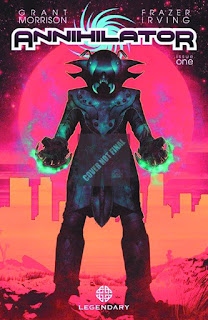 Volume 1 - 1st printing. Collects Annihilator (2014 Legendary) #1-6. Written by Grant Morrision. Art and cover by Frazer Irving. Legendary Comics proudly presents Annihilator, an original graphic novel odyssey from the subversive mind of Grant Morrison. Washed-up Hollywood screenwriter Ray Spass is caught in a downward spiral of broken relationships, wild parties and self-destruction. Out of luck and out of chances, he's one failed script away from fading into obscurity. Little does he know he's about to write the story of his life. As his imagination runs rampant, Ray must join forces with his own fictional character Max Nomax on a reality-bending race to stop the entire universe from imploding - without blowing his own mind in the process. Hardcover, 200 pages, full color. Cover price $24.99. 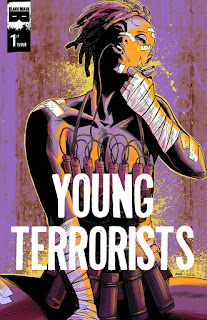 Written by Matt Pizzolo. Art by Amancay Nahuelpan. Cover by Amancay Nahuelpan. What if 'The Smoking Man' from The X-Files were a real person, and his daughter found out what he did for a living? The daughter of an assassinated globalist kingpin breaks out of an internment camp and leads her fellow escaped prisoners in a battle against an elitist conspiracy of shadow governments, megabanks, and military juntas in this edgy and subversive sci-fi thriller. Incendiary writer Matt Pizzolo and striking newcomer Amancay Nahuelpan unleash this tour-de-force that fearlessly assaults politics-as-usual. Young Terrorists continues the legacy of DMZ and The Invisibles as it manically rips the scab off life under the new world order and revels in the pus underneath. Cover price $6.99. 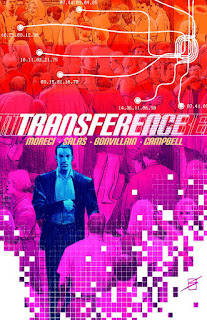 Written by Michael Moreci. Art and Cover by Ron Salas. Colton Moss and his elite team of special agents who have mastered the consciousness-shifting time travel known as 'transference' find themselves in an altered present where they must hunt down enemies who can be anywhere, anyone, at any time. Cover price $3.99. 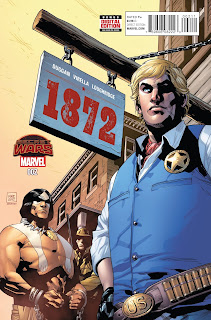 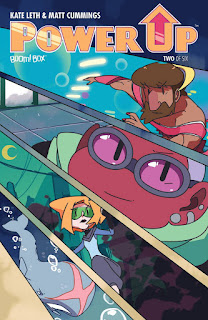 Written by Kate Leth. Art and Cover by Matt Cummings. A traffic jam turns into a battlefield as Amie, Sandy, Kevin, and Silas fight together as a team for the first time! Cover price $3.99. 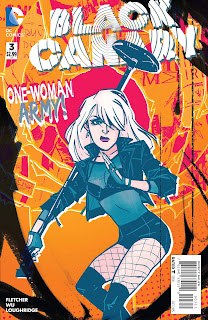 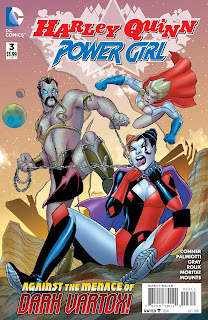 Written by Amanda Conner & Various. Art by Stéphane Roux. Cover by Amanda Conner. Power Girl and Vartox are finally face-to-face…unfortunately, it's the terrifying Dark Vartox, corrupted by an ancient cosmic evil! And good lord, what has it done to his nipples?! Cover price $3.99. 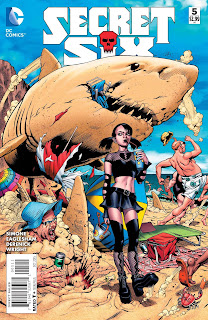 Written by Gail Simone. Art and Cover by Dale Eaglesham. After the initial attack on Big Shot's home (and the shocking revelation of one member's true identity), the team's suburban retreat has been exposed. As the team starts to fracture, this highly dysfunctional band of outcasts prepares for the next strike from Mockingbird! Cover price $2.99. 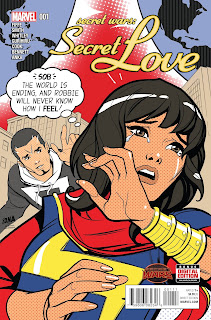 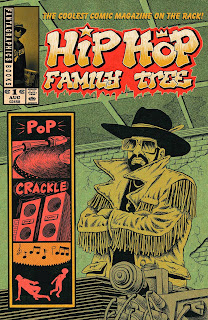 The New York Times bestselling book series debuts as a monthly comic book (!) with new covers, artwork, a 'director's commentary' section that describes the motivation, process, and research involved in making this masterpiece, plus other surprises! This first issue highlights the breakdancers, graffiti artists, DJs and MCs who formed hip hop culture beginning in the tenement rec rooms of the south Bronx in the 1970s. You'll discover who invented the term 'Hip Hop'. You'll see names you recognize like Grandmaster Flash and Afrika Bambaataa and you'll discover where they fit into the culture as pioneers... every month! Cover price $3.99. 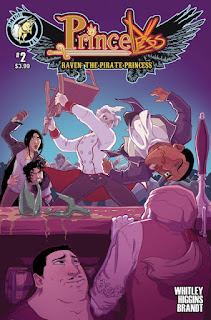 Written by Jeremy Whitley. Art and Cover by Rosy Higgins and Ted Brandt. The events of issue 1 have left our fearless heroine worse for wear, but Raven is ready to put together a crew and with the help of her old friend Cookie, she's looking to interview every rogue, cad, and scoundrel that ever sailed the seven seas. But when you put that many pirates in one place, there's only one possible outcome: FIGHT! Cover price $3.99.