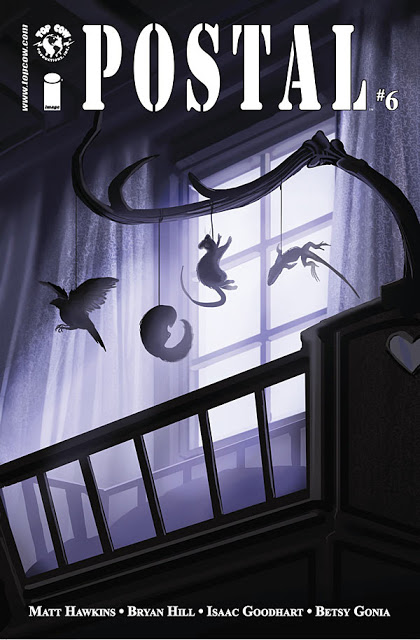 Matt Hawkins and Bryan Hill turn over 'Postal' #6 to Momma Shiffron with some important character development and background. The stone-cold mayor of Eden and asshole mother of Mark, has a traumatic history that forged her character long ago. We witness a more vulnerable version of Laura Shiffron and we can't help but feel sympathetic.
I never thought I'd feel an ounce of sympathy for the cold-hearted Momma Shiffron for treating Mark like a complete imbecile and putting him down. Yet, in this issue we it's revealed what kind of sociopath Mark's dad was. And what he put Laura through contributed to the iron-fisted ice queen you see now. But she's more complicated than that. We see different sides to her, literally speaking in the opening scene, and it helps to humanize her for the first time. Her delicate handling of a suicidal girl was the kindest I've seen her in the series. As the mayor of a town like Eden it makes sense to have someone as tough as Momma Shiffron running the show.

Mark makes a cameo long enough to break a code for his mother. It's an amusing scene as it emphasized his analytical mind. There's also a code after the story for readers to break and send in for a chance at a prize. A nice interactive contest for fans.

Matt Hawkins and Bryan Hill continue to pull back the layers of their eerie small town full of dark secrets. They've turned Mommie Dearest into a much more rounded character with this essentially stand-alone issue. Meanwhile, Isaac Goodhart continues to do exceptional art on the series. Some of the layouts involving Mark's dad were especially chilling.

'Postal' continues to evolve as Hawkins and Hill take us deeper into the rabbit hole.I'd love for Mark's dad to finally make an appearance in present day as that thread has lingered there for a while, teasing readers of a powerful menace but continues to be out of reach. It's still one of the major unanswered plot points that was created but never fully realized. Otherwise, the series is still intriguing enough to keep pulling it every month. There's a much bigger plan at work and impatient readers like myself want satisfaction now. I suppose the writers are doing their job of keeping readers on the edge of our collective seat begging for more.