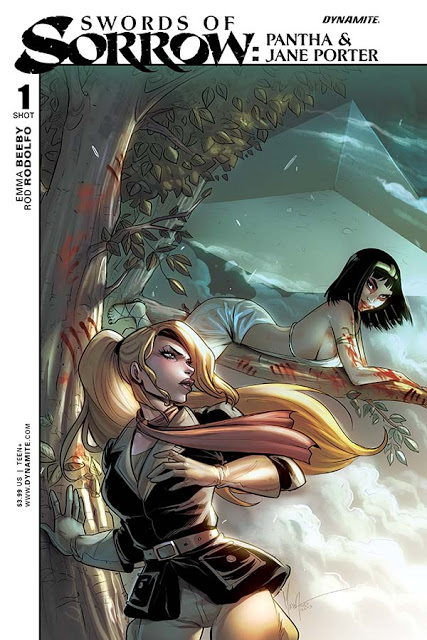 I'm not even going to sugarcoat it, 'Swords of Sorrow: Pantha & Jane Porter' one-shot is an unapologetic thrill ride from beginning to end. It provides just enough character development to recognize who's who but when our leading ladies aren't going toe-to-toe with each other they're battling Purgatori and a monster-filled London. Buckle up, kids, this one is going to be a bumpy ride.
Admittedly, I wasn't very familiar with either heroine. Jane Porter I knew because of her role in Edgar Rice Burroughs' Tarzan stories. Here she's Tarzan's wife but it's her story as she's portrayed as an independent woman, explorer, aviator and trained in boxing and martial arts. Like the entire line-up of Swords of Sorrow women, Porter is no push over.


I never heard of Pantha but she has the ability to transform into a vicious panther seeking out demons and munching on their throats. I think I'm in love! She crosses over into another dimension after being approached by the Courier offering a special sword. She and Porter cross paths and chaos ensues. What do you expect when two alpha females clash?

Writer Emma Beeby is a name I didn't know. She was hand-picked by Gail Simone as were all the writers of the Swords of Sorrow event. After reading this one-shot, I could see why she was chosen. Beeby demonstrates great skill in balancing character development, dialogue and action pieces. There is a beat and rhythm to her storytelling that flows without it being clunky, campy or confusing. She wastes no time telling you who each character is and swiftly embroils them in some kind of high-risk situation with ease. You are along for the ride, clinging to each page with anticipation and anxiety, being grabbed by the collar and taken to another world. It's adventure writing as it should be.

Rod Rodolfo's art keeps up the pace with some concise framing of scenes that have to move fast from one action to the next. There's a lot going on so while some panels seem rushed, overall the layouts accentuate the climax of each set piece. Rodolfo offers up some clean and intricate character designs of Porter and Pantha. From period wardrobes to larger-than-life monster creations, Rodolfo handles everything well with economical but effective designs.

You can set aside your preconceived notions about strong female characters and just enjoy these action heroes on a rudimentary level. It may not add much to the overall Swords of Sorrow arc, but it stands on its own. It garners five stars not because it's perfect but because it's perfectly entertaining.