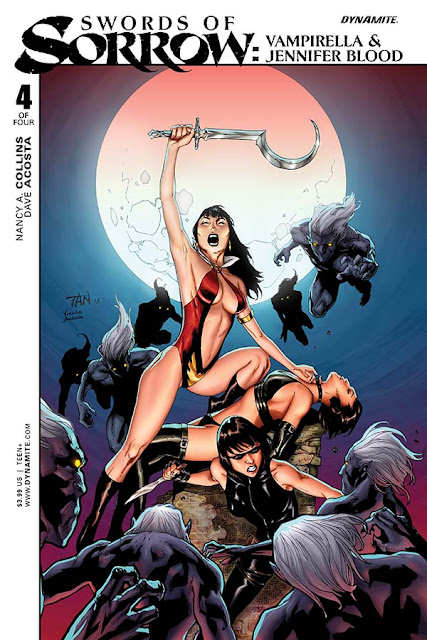 'Swords of Sorrow: Vampirella & Jennifer Blood' has been a wild and violent ride. When Jennifer Blood is involved you can expect that and then some. This tie-in mini to the Swords of Sorrow crossover event has been the gritty street level entry mixed with some supernatural elements. The effect on Blood is especially amusing to see her befuddled by it all. Now both she and Vampirella are working together in this action-packed conclusion.


Once at odds, Vampirella and Jennifer Blood have realized they can work together in part because they've been chosen by the Traveller for a higher purpose. Now that Chastity has revealed herself to be the one pulling the strings pitting our heroes against each other the battle begins. It's an 80's action movie come to life as the two face a horde of demons and the bullets begin to fly.

Dave Acosta's layouts feel somewhat confined providing little scope of what the two heroines face. It's not a good view of the battlefield. However, in close-ups Acosta shines with the expressions from Blood in particular who continues to reload in a vain attempt to put down this seemingly unkillable demons. Acosta has done great work throughout the miniseries with inventive perspectives and solid character designs.

Nancy Collins gives both lead characters a distinctive voice but it's hard not to love how she infuses Blood with her signature headstrong and fearless personality.Blood stole the series with her relentless asskicking especially when the local gang was involved. There aren't many characters like Blood in comics. Especially, as a double-fisted, gun-blazing female vigilante.

Admittedly, the ending wasn't very surprising except for Chastity's reveal. We know Vampirella and Jennifer Blood finally join up with the other awesome ladies of 'Swords of Sorrow' in the main book. It was just a matter of seeing how and not if they would come out ahead. Yet, it doesn't detract from the exciting action, humor and camraderie from these two very different but equally compelling characters.