The Flash Review (S2E5): "The Darkness and the Light" 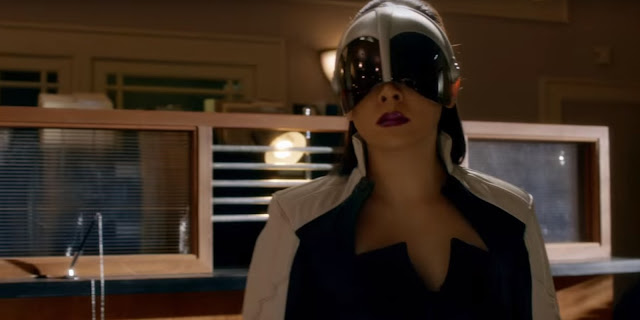 Until 'Legends of Tomorrow' are officially on the air and running, 'The Flash' and 'Arrow' will be assembling the origin stories of the team. It's a delicate balance of introducing guest stars for the sake of establishing their backstory for another show and servicing the main narrative of the season. It can get awkward like 'The Fury of Firestorm' but in 'The Darkness and the Light' the introduction of Kendra Saunders (aka Hawkgirl) is a little more subtle while still adding Dr. Light and addressing Cisco's secret powers. With so many storylines going on it could easily have gone sideways but the episode smoothly juggles them with precision.

"You know, our Dr. Wells may’ve been evil, but you’re just a dick," Cisco with a keen observation about Earth-2's Harrison Wells, called Harry for clarity now. It's such a treat having Tom Cavanagh back on the show playing a possibly evil scientist again but with a way more abrasive personality. Arrogant and ill-tempered, Harry is no patient mentor to Team Flash. Especially with Cisco trying to tap into his "vibe" powers. Oh, yeah that secret's out of the bag now. Harry, like Earth-1's Wells/Eobard Thawne, is invested in making Barry a better Flash. His approach is much more urgent and direct. The fact that Zoom is holding Harry's daughter, Jesse Wells (Violet Beane), hostage I'm sure is an important factor.

However, as you can imagine the devasting legacy Wells/Thawne left behind everyone has immense trepidation trusting Harry. Jay Garrick knows first hand about Harry from their conflicts back at the sepia-toned art deco world of Earth-2. Where Harry is quick to build Barry up he's just as fast at tearing Jay down, calling him a coward and ridiculing him for not stopping Zoom before. It's uneasy alliance to say the least.

Dr. Light is the latest Earth-2 villain to make it through the breach on orders from Zoom to try and kill Barry. She's under the impression that she can shake Zoom's influence if she kills her Earth-1 doppelganger Linda Park (Malese Jow). Barry confronted her before, trying to reason with her, but was stunned twice; once seeing it was Park and then with her ray of light. The light temporarily blinded Barry which led to an amusing bit.

Having made a promise to Patty Spivot (Shantel VanSanten) to show up for their date, blind Barry enlisted Cisco to be his eyes via camera-enabled sunglasses. Watching the ongoing commentary from Cisco was hilarious and Barry and Patty were adorable exchanging quizzical glances until the jig was up. VanSanten has added a burst of infectious energy and joy as the highly motivated metahuman detective and her scenes with Grant Gustin are some of the most endearing.

Cisco, ever uneasy about his developing powers, gets outed by Harry out of necessity. Harry's metahuman radar watch proved his assumptions about Cisco and  helped to find Dr. Light. By the end, Cisco got a cool nickname thanks to Barry. "Vibe" was born and the added confidence helped to successfully ask out the barista at Jitters after fumbling it earlier in the episode. It just so happened to be a new transplant to Central City, Saunders (Ciara Renée) who'll be making her eventual arrival to 'Legends of Tomorrow' mid-season.


Zoom's impending arrival is raising the stakes leading to Team Flash having to bring more help and find new ways for Flash to improve. They'll be using Earth-1 Park to pose as Dr. Light to lure Zoom and Harry's play call to have him run fast enough to create multiple impressions of Barry could prove useful. Heck, Garrick's friend from Atlantis might even make an appearance, whoever that is. 'The Flash' does a great job of balancing all these situations while holding on to what makes the show fun and charming.

Check out this preview for the next episode, 'Enter Zoom.'

After recent events, Barry (Grant Gustin) decides it’s time to confront Zoom and comes up with a dangerous plan. Caitlin (Danielle Panabaker) sides with Jay (guest star Teddy Sears) and deems it too dangerous for Barry to engage with the speed demon. However, Iris (Candice Patton) shows her support and brings forth a surprising ally. We see what Earth-2 Harrison Wells’ (Tom Cavanagh) life was like before coming through the breech. JJ Makaro directed the episode written by Gabrielle Stanton & Brooke Eikmeier (#206). Original airdate 11/10/2015.