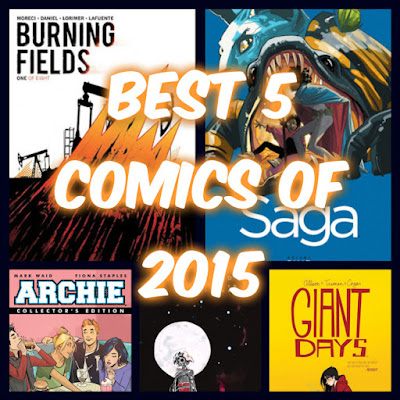 Tis the season for "Best of..." lists and now it's my turn. These are the Best 5 Comics of 2015 (in no particular order) that had me chomping at the bit every month. Were there more than five comics worthy of being the best? Of course. It's all subjective, I could have easily swapped a title or two with other worthy candidates. There were plenty of books I didn't read or didn't have access to, that I may have missed but it's always better to have too many options than too few to choose from. Trust me, though, these five are as worthy as any other and if you disagree please share your top five in the comments below. 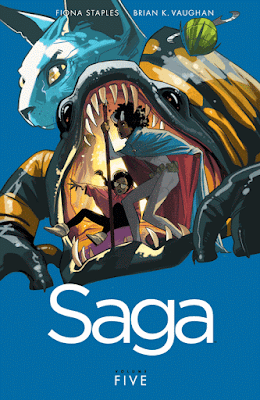 It's become so commonplace to have Image Comics' Saga in 'Best of...' lists, it should really be renamed the 'Best Comics Besides Saga of 2015.' Brian K. Vaughan and Fiona Staples have cemented their place in comics as one of the most highly acclaimed and best-selling titles every year. Their science fiction space opera consistently provides provocative storylines, exciting twists, and most of all gripping characters. At the heart of it are Marko and Alana whose trials and tribulations on the run with baby, grandmother, half-bodied apparition in tow makes it a comic like none other in the market. 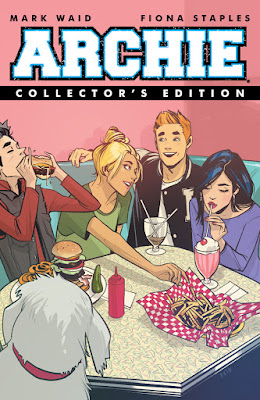 A lot of hype followed the rebooting announcement of Archie Comics' flagship book 'Archie.' It was unavoidable when you have one of the most prolific writers in the business in Mark Waid and the award-winning artist of the blockbuster 'Saga' series in Fiona Staples. It turned out the hype was real. 'Archie' with a modern update, more realistic character designs, looked beautiful but also kept what made the 75+-year-old property fun - hi-jinks and teenage melodrama. 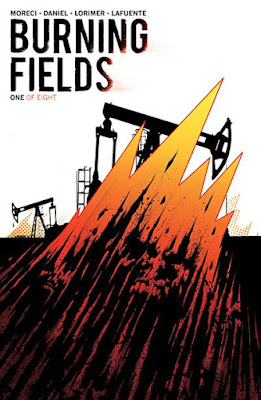 Sometimes a team of collaborators get together and the result is astonishing. Everything seems to fall in place - from plotting, to layouts, to colors, to dialogue. The perfect storm in comics in 2015 was Boom Studios! 'Burning Fields.' Writers Michael Moreci, Tim Daniel, and artists Colin Lorimer and Joana Lafuente pieced together a tightly written, dramatically illustrated tale that combined the best elements of television crime procedurals with the look of Oscar-winning cinematography. The rare comic book mini-series where the dialogue was as compelling as the visuals. The dark, horror noir, created a suffocating and terrifying landscape, but even more frightening than the monsters were the all too corrupted humans. Easily one of the best if not the best of 2015. 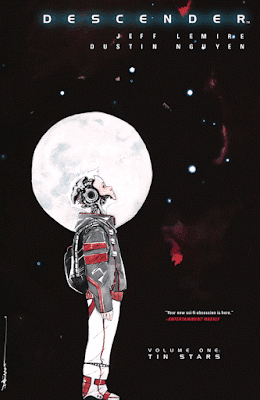 There are few comic book writers that can make you feel things, genuinely and heartfelt, like Jeff Lemire. With Dustin Nguyen's amazing watercolors and delicate character designs, human emotions didn't stand a chance with Image Comics' sci-fi 'Descender.' The story of an android boy who awakens after giant machines destroyed a colony of planets including the mining outpost that housed his human family. In an anti-robot environment, his shared "DNA" with those machines makes him the most wanted robot in the galaxy. It sweeps you away and has you rooting for TIM-21 the entire way. 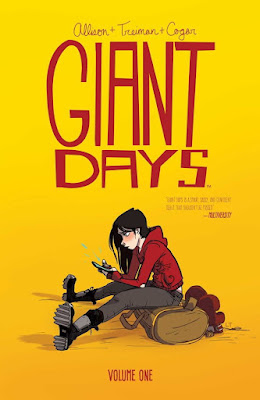 There was no comic that made me feel better, brought me more joy, and made me laugh in 2015 like Boom Studios' 'Giant Days.' The story of Daisy, Esther, and Susan during their first year in college is a delightful comedy smartly written by John Allison and colorfully drawn by Lissa Treiman. In a series of funny situations involving the pressures of college life, relationships, and personal growth, Allison and Treiman do it all with great expressive art, wit and plenty of heart.

By Enrique Rea October 04, 2017
Created, written, and drawn by Dan Panosian, 'Slots' #1 is his baby and he has a story to tell at his own damn pace. This beautifully illustrated story is centered squarely on former boxer Stanley Dance and his attempt to find redemption despite being someone without many redeeming qualities.


SLOTS #1
Writer: Dan Panosian Artist: Dan Panosian Publisher: Image Comics Release Date: October 4, 2017 Cover Price: $3.99
Score: ★★★★☆ (4/5)
'Slots' is more of a character study than a rip-roaring crime caper but Panosian's protagonist is a charming cad, full of confidence, capable of swindling you out of a restaurant bill with a devilish grin on his face. He's headed back to Vegas to fulfill a favor he owes. He returns to his old haunts where everyone knows him and knows he must be playing some kind of angle. 'Slots' succeeds because Stanley is so magnetic even when he's a jerk he's interesting. So following him around town meeting up with old friends is…
Post a Comment
CONTINUE READING »

By Enrique Rea May 01, 2018
As Carin becomes accustomed to her new abilities, Stryker is determined to keep her out of the line of fire. He knows these "gifts" come at a price. Meanwhile, The Accuser recruits a dangerous ally.


CYBER FORCE #2
Writer: Matt Hawkins, Bryan Hill Artist: Atilio Rojo Letterer: Troy Peteri Edited by Elena Salcedo Publisher: Image Comics Release Date: April 25, 2018 Cover Price: $3.99
Score: ★★★★☆ (4/5)
Matt Hawkins and Bryan Hill set the foundation in issue one with the explosive and destructive arrival of The Accuser. In her wake was the shattered body of Stryker, who along with his paraplegic daughter, get an extraordinary chance to become not only whole again but enhanced. Carin has taken to her powerful working legs with enthusiasm and joy. Stryker not so much because he knows they're being used by C.O.I.It's an uneasy arrangement but origin stories are rarely simple and carefree. Whether one's powers are considered a gift or a curse, there is a price to pay i…
Post a Comment
CONTINUE READING »

By Enrique Rea April 24, 2018
The World’s Greatest Mystery. The World’s Greatest Detective. They can barely stand each other, so how will they possibly deal with the World’s Greatest Evil? What legacy can two of the world’s most enduring icons of justice leave once they discover an ancient evil has been living inside the world they protect for centuries? Can Batman and the Shadow save the world without destroying it in the process?

By Enrique Rea April 17, 2018
John Wick's origin story continues! In the underworld of El Paso, Texas, a familiar face introduces an ex-con named John Wick to the local branch of the mysterious Continental Hotel, a neutral zone where professional killers spend their downtime. But can John adhere to the rules of the Continental? Or will his search for vengeance destroy his chances for a peaceful life? Also... does John Wick actually have...a cat?

By Enrique Rea May 07, 2018
It takes one really dude evil dude to piss off both the She-Devil with a Sword and the Lord of the Jungle. Eson Duul is that dude and he's so vile he has zero respect for man, woman, or beast. Now, he's put himself in the crosshairs of Sonja and Tarzan. Dive into this exciting pulpy adventure.


RED SONJA/TARZAN #1
Writer: Gail Simone Artist: Walter Geovani, Adriano Augusto Letterer: Simon Bowland Publisher: Dynamite Entertainment Release Date: May 2, 2018 Cover Price: $3.99
Score: ★★★★☆ (4/5)
A comic book veteran like Gail Simone is capable of writing just about any genre. Superheroes, horror, fantasy, crime drama, you name it she's done it. She's also adept at writing leading female characters. In 'Red Sonja/Tarzan,' she's in her wheelhouse with Sonja and John Clayton aka Tarzan on an adventure of revenge.
Duul is as despicable a villain as you'll find in comics or any other medium. It's clear from the jump that he takes what he wants and doesn'…
Post a Comment
CONTINUE READING »