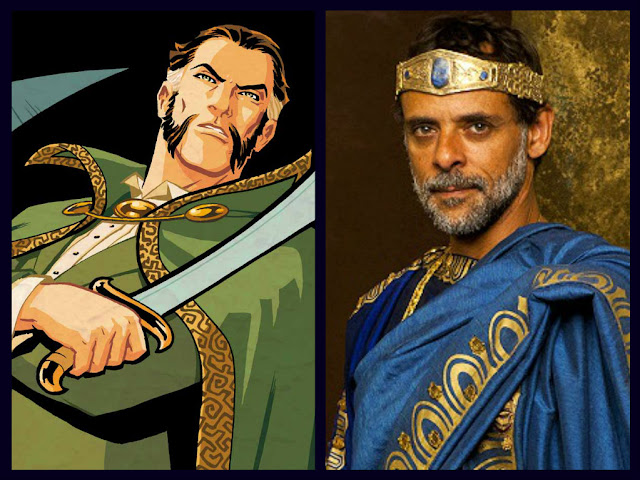 Your suspicions of Ra's al Ghul coming to Fox's 'Gotham' have now been validated.The mystical supervillain is indeed coming in the form of Game of Thrones actor Alexander Siddig. Check out the synopsis:

As Bruce (David Mazouz) pulls the veil off the Court of Owls, he finds the man pulling the strings is the enigmatic and powerfulRa’s al Ghul. With his past shrouded in mystery, Ra’s al Ghul uses cunning and deception to lay waste to his foes. As the leader of an international criminal organization known as the League of Shadows, Ra’s al Ghul will prove himself to be Bruce’s most dangerous adversary yet.

Siddig played Prince Doran Martell on HBO's hit show and has also appeared on Peaky Blinders, Da Vinci's Demons and Star Trek: Deep Space Nine. The Court of Owls storyline this season has the young Bruce Wayne ( David Mazouz) battling the mysterious organization bringing him closer to the leader of the League of Shadows. Siddig will first appear at the end of the current third season in a recurring role.

Ra's al Ghul's name in Arabic translates to "The Demon's Head," and up until now, the character hasn't been played by a Middle-Eastern actor in live-action despite his origins in the Arabian Penisula. Liam Neeson (Irish) played the role in Chris Nolan's 'Batman Begins' and Matt Nable (Australian) had a recurring role on CW's 'Arrow.' The English-Sudanese Siddig will be the first to come closest to al Ghul's origin.

April 26, 2017
It's another glorious week of comics and there's no shortage of great titles. How can you beat BITCH PLANET? How about a BATMAN/THE SHADOW collaboration from Scott Snyder, Steve Orlando, and Riley Rossmo? Perhaps you want a blockbuster cinematic experience then check out X-O MANOWAR. Love 'Aliens'? Grab the first issue of ALIENS: DEAD ORBIT. Want some high adventure? Buy DOC SAVAGE: RING OF FIRE, THE OLD GUARD, BRITANNIA, LADY CASTLE, KARMA POLICE, and MAGDALENA. Whatever you're in the mood for get it today! Happy reading!

(W) Sam Humphries (A) Caitlin Rose Boyle (CA) Lissa Treiman She doesn't sling arrows, only attitude!  The adventures of Jonesy, the teenage cupid with a penchant for plaid, continue here. Stuff still rules, high school still sucks, and getting anyone to fall in love with her is still impossible! Collects issue #5-8.