May 11, 2017
Jumping into this week's batch of comics to review I read 'Regression' without seeing who wrote it and I was surprised and I wasn't when I realized who did. This terrifying little tale that will make your skin crawl isn't written by a young up-and-comer cutting his teeth in indie comics it's actually by a prolific veteran who can still impress with fresh ideas that haunt and resonate. Cullen Bunn is that writer and this creepy gem is 'Regression.' 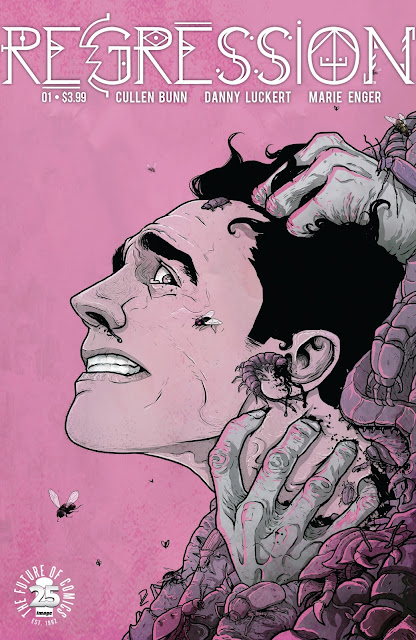 I was pleasantly surprised to find that Bunn's voice is as vibrant and skillful as ever but as the creator of Harrow County, The Sixth Gun, and The Empty Man I really shouldn't be surprised at all. This story has some personal history for Bunn as the idea was spawned a long time ago when his dad was performing past life regressions as a hypnotist. Most folks who go under can verbalize their subconscious mind revealing past events. What if a subject couldn't verbalize it? What unspeakable acts could be hidden in one's past that would leave them speechless? Unfortunately, for Adrian, some of those horrors manifest themselves while very much awake.

Imagine seeing grotesque swarms of bugs being expelled from people's orifices in your everyday life. It's a nauseating reality for Adrian who gets these hallucinations often. And it's getting worse. A friend recommends seeing a hypnotist and despite his skepticism, he agrees. It takes him down a strange path while he's under, replaying moments in his life and some he probably didn't know were there. While he has no recollection of what he just saw, something or someone has followed him from the depths of his subconscious.

Aiding Bunn are some extraordinary artists that help make this tale even more frightening. Danny Luckert has a clean smooth style whose linework is exquisite and designs are almost photo-realistic. This crisp and clean approach featuring a ton of detail in every panel is juxtaposed against a bevy of filthy, squirmy, pile of maggots, worms, roaches, beetles, flies, and god knows what else. It's the perfect shock to the system when things get dark and gruesome. Marie Enger uses some deep gradients of warm colors to flesh out the panels and it looks lush and inviting. It helps to draw the eyes further into the panel but also make you jump when a knife comes out, for example.

Cullen Bunn has another winner on his hands with 'Regression.' A horror story that will unnerve you and shock you. Luckert and Enger help bring it all to life with glorious and grotesque art. It'll creep you out, maybe even gross you out but it'll keep you engaged the whole way. 'Regression' sets the tone right away and keeps you hooked.

April 26, 2017
It's another glorious week of comics and there's no shortage of great titles. How can you beat BITCH PLANET? How about a BATMAN/THE SHADOW collaboration from Scott Snyder, Steve Orlando, and Riley Rossmo? Perhaps you want a blockbuster cinematic experience then check out X-O MANOWAR. Love 'Aliens'? Grab the first issue of ALIENS: DEAD ORBIT. Want some high adventure? Buy DOC SAVAGE: RING OF FIRE, THE OLD GUARD, BRITANNIA, LADY CASTLE, KARMA POLICE, and MAGDALENA. Whatever you're in the mood for get it today! Happy reading!

(W) Sam Humphries (A) Caitlin Rose Boyle (CA) Lissa Treiman She doesn't sling arrows, only attitude!  The adventures of Jonesy, the teenage cupid with a penchant for plaid, continue here. Stuff still rules, high school still sucks, and getting anyone to fall in love with her is still impossible! Collects issue #5-8.

April 21, 2017
Valiant announces that it will include an extended seven-page sequence from June’s SECRET WEAPONS #1 – the FIRST ISSUE of the hotly anticipated limited series putting Livewire in command of an extraordinary new team of heroes – in all of its May 2017 titles!
On June 28th, Academy Award-nominated screenwriter Eric Heisserer – writer of the internationally acclaimed, smash-hit motion picture ARRIVAL, as well as Valiant’s upcoming HARBINGER and BLOODSHOT feature films from Sony Pictures – joins forces with Harvey Award-nominated artists Raul Allen (WRATH OF THE ETERNAL WARRIOR) and Patricia Martin (BLOODSHOT REBORN) to bring Livewire and her squad of superhuman outcasts out of hiding…and onto the frontline of the Valiant Universe’s coming battle against the cybernetic hunter called Rex-O!

Now, before the first issue hits stands on June 28th, find out why SECRET WEAPONS #1 is one of the year’s most anticipated new series with an extended sneak preview in all of Valiant’s standard and Premi…
Read more