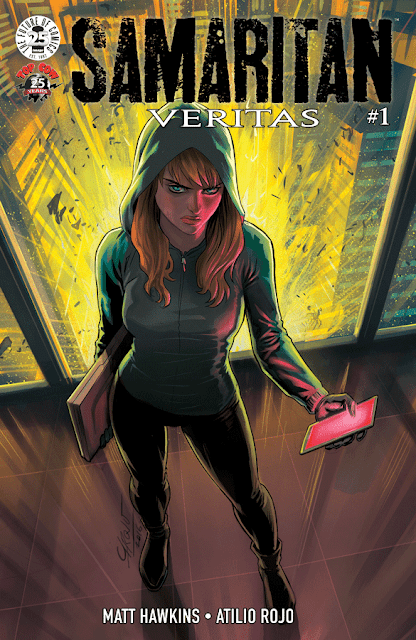 
The Tithe found Samaritan taking on nefarious mega-churches and this time the only things more corrupt are the U.S. government and military contractors. The President is in Samantha's crosshairs but she's also a hunted woman using all her hacking skills and the resources of the dark web to counter her pursuers. It's this complex cat-and-mouse game that Hawkins unfolds while also providing Samantha's background for new readers. Hawkins does a delicate balancing act adding exposition with flashbacks while moving the story forward in the present and introducing new characters. 'Samaritan' is an immersive story that hums like a fast-paced political thriller. You can't help but see the influence of television's "24" and "Mr. Robot" with the intrigue of movies like The Bourne Identity and Patriot Games. Hawkins has done his homework giving this high-stakes drama a grounded and realistic portrayal of an abuse of government power and the illegal methods in which to counter such actions.

Rojo choreographs a dynamic and exciting issue. The varied points of view and detailed backgrounds really convey urgency and depth in every scene. Rojo's command of action and firearms help punctuate scenes where a kill shot needs an appropriate oomph! But really there's nothing Rojo can't do and with his slick color schemes, every page is rich with color and moody as needed. Hawkins and Rojo are in sync providing a nice one-two punch where story and art find synergy.

'Samaritan: Veritas' is off to a magnificent start full of intrigue, action, and dubious characters. It's a stellar addition to the Edenverse that incorporates many of Top Cow's best titles and ties them together. If you enjoy tense political thrillers with great visuals then this is for you. Hawkins and Rojo drop you right into the action and the pursuit is on. Make sure you don't miss it.

May 16, 2017
Donnie Cates is one busy man. As if writing two concurrent titles for Image Comics - Redneck and God Country - wasn't enough, Cates has found more time and inspiration to pen one for AfterShock Comics. That's where 'Babyteeth' #1 comes in. It's the latest page-turner from one of the hottest creators in comics.


★★★★★ (5/5)
This is Sadie Ritter's story. A first person account as told to her smartphone recording a video for her new offspring. The teenager recounts the incredible details leading to giving birth to the antichrist. That's right, the antichrist. At this point, you couldn't blame Cates for going hog wild with the supernatural fireworks from riding a wave of success and critical cache in his career. Instead, Cates shows some restraint adhering to some professional discipline and lets the story unfold quietly.
With any pregnancy, there's enough anxiety and stress to deal with. Imagine your water breaking unexpectedly and having your older sis…
Post a Comment
Read more


★★★★☆ (4/5)
The heart and joy of 'Wonder Woman '77 Meets the Bionic Woman' #4 is seeing Jamie Sommers being welcomed to Paradise Island as Wonder Woman brings her home for a visit. It's a scene fans may not have ever imagined before this comic arrived but get to relish the love and hospitality of the Amazons. The beauty of crossovers like this is making things that seemed impossible possible. Two characters from different worlds brought together to fight a malicious menace that combines the idiosyncracies of each into one fantastic fun read.
Along with Diana's mother, Queen Hippolyta, we get to see a couple of fan favorites from the television series. Drusilla, played by Debra Winger …
Post a Comment
Read more