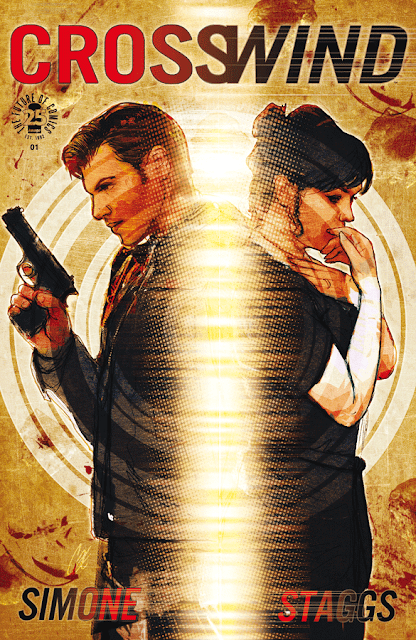 
When you unleash such incredible talents like Simone and Staggs anything can happen and with Crosswind, they've taken the familiar swapping bodies trope and made it into a lethal crime thriller. The two protagonists couldn't be more different from each other.

We first meet the hitman Cason Ray Bennett. A dashing killer with a conscience forced to eliminate a potential rat in an organization run a by a Mr. Randolph. It's kill or be killed even if that means shooting your friend point blank in the face. Simone sets the tone early, she's not fucking around, this is serious business, serious mob business. Cason is a loyal confident soldier, doing his job as Mr. Randolph commands. Before visiting the ravishing Ms. Rialto, Cason runs into a mysterious bum on the street with an ominous message. "There are two of you when it happens...In the darkness, you touch," he says freaking Cason the hell out. The scene is brief but effectively sets the stage for what's to come. It reminded me of Stephen King's novel "Thinner" where a similar moment occurs when a vengeful Gypsy curses an overweight lawyer to continually lose weight until he dies. This incident isn't as menacing but every bit as foreboding.

Next, we meet our other protagonist the beleaguered, bullied and belittled Seattle housewife Juniper Elanore Blue. Trapped in an emotionally abusive marriage with a philandering husband, a disrespectful teenage stepson, and the target of vulgar sexual come-ons from young neighborhood misogynists, June meekly apologizes for herself unnecessarily and takes the punches, metaphorically speaking. Only in her daydreams is she allowed to escape her reality for a short time but returns to earth to submit obediently to those around her. She has no sense of self, no agency, and overdue to shed her life as a pushover.

You won't find Jodie Foster or Lindsay Lohan in this version of 'Freaky Friday.' This is no lighthearted comedy romp between mother and daughter switching bodies discovering what it's like to live in each other's shoes. Instead, Simone and Staggs have set the table for a hard boiled and deadly game of trading places that will change these characters forever. Best of all, some people will finally get what's coming to them.

The stark contrast between Cason and June is intentional which makes what will happen all the more satisfying. Simone is a pro that knows which buttons to push to get a rise from the reader and I'm all in hook, line, and sinker. She has a knack of catering to our darkest desires, so yes, I want to see some of these characters suffer. And so will you.

Staggs does some incredible virtual photorealistic illustrations with dynamic layouts and perspectives. It keeps the reader engaged and off-balance. She conveys a myriad of emotions deftly and concisely. Singular panels pack an impassioned punch; a reluctant Cason debating shooting his friend, an emotionally exhausted June sitting on her floor, and others that range from sexy, to shocking, to demeaning. Simone is determined to put the reader through an emotional grinder and it works. Staggs makes sure you feel EVERYTHING with your eyes and thus your heart.

'Crosswind' is off to a rip-roaring start. It's taken what you'd expect from a swapping bodies plot and mucked it up in a violent vengeful way. Simone and Staggs have in essence punched out from their corporate jobs and entered an underground fight club, dipped their wrapped fists in broken glass ready to deliver a knock-out punch to the throat. 'Crosswind' is a definite knock-out. I can't wait to see what happens next.
Email Post
Labels: Cat Staggs comic books Crosswind Gail Simone image comics reviews Simon Bowland