By Hank Rea July 21, 2017
"America, 2020. Three young hackers with nothing to lose. A secretive scientist with a plan. One final job. What happens when you're poor, angry, and get superpowers you never asked for? 'Skins' + 'Unbreakable' = GENERATION GONE." 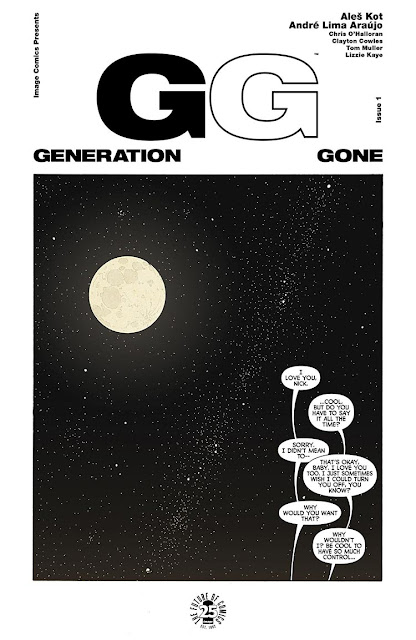 Meet Elena, Nick, and Baldwin. Three millennial hackers on the verge of a windfall end up getting more than they bargained when they come across a life-altering code. Ales Kot and Andre Araujo have placed their own spin on the superhero genre with an engaging and immersive new book, Generation Gone. The year may be 2020 but it's very current and timely in the topics the book touches on without being heavy-handed about it. This extended first issue offers over 50 pages of character development leaving the more sensational drama towards the end. The move pays off as we get to know these characters before things turn heroic.

Each of the hackers have very different dreams. The three have been testing their hacking prowess by infiltrating the systems at DARPA poking around the scientific research facility. It's all a trial run before they try to milk a bank for millions of dollars. Unbeknownst to them, Dr. Akio is a scientist working on a surveillance program for DARPA but who's real passion is a pet project called Project Utopia. He explains in great detail through a power point presentation that he has theoretically found the coding that could unlock superhero abilities in humans. You can see where this is going. It would have been very easy for Kot to jump right to the hackers' transformation but instead he smartly continues to build on the group's dynamics exposing their idiosyncrasies and personalities.

Elena is a hardworking student with two jobs who looks after her cancer-stricken mother. She's dating slacker Nick who's dickish and condescending to her. Baldwin is disciplined who relishes a routine and precision. It's a volatile mix of personalities at times which sets the table for some potential drama for when they become super powered. They have no idea what's in store for them as their only concern is hacking their way to a big payday. As for Dr. Akio, he's ruffled the feathers of his supervisors as they've grown impatient with his research. They're conceived his Utopia project has him distracted. Little do they know that his Utopia project and the hackers are about to cross paths with remarkable results.

'Generation Gone' is a slow burn story that's more interested in building a world full of people and not events. Kot lays out the perfect introduction to everyone involved that alone is intriguing and engaging. We can see how the story unfolds and where it's going but we become invested in who they are especially Elena. And at over 50 pages it's also one hell of a deal.

Araujo is tasked with a lot of the heavy-lifting as his caption-less panels tell the story later in the book. There are visual cues that say a lot with nary a word. The world these young people navigate is grounded to real problems. Expensive cancer treatment, school loans, police brutality, financial issues, toxic personal relationships and the use of technology. Araujo uses plenty of detail and deliberate pacing with wonderful color schemes from Chris O'Halloran that are understated and soft but effective. The art is clean and smoothly choreographed.

'Generation Gone' is a surprisingly fresh superhero story that is rooted in the here and now with relatable characters whose motivations are clear. It recalls the film "Chronicle" with young people on the verge of attaining superhuman powers. It'll be their character that defines the kind of hero they will be and that is what makes this so fascinating. At times predictable but with such a well executed beginning you'll want to know what happens next as soon as possible. 'Generation Gone' is worth adding to your pull list.

By Hank Rea June 18, 2019
The body count increases and the mystery deepens as Vampirella and Red Sonja investigate the deaths plaguing Riverdale High. Turns out American high school life is as mysterious and perplexing as the murders themselves! Meanwhile, Betty and Veronica have troubles of their own when they butt heads with the editor of the school newspaper over their investigative news coverage. Is there a coverup afoot?

Legendary Comics Releases Volume Two of 'Lost in Space: Countdown to Danger' and 'Firebrand: The Initiation of Natali Presano'

By Hank Rea June 14, 2019
Legendary Comics announces the release of the second seasons of popular comic series: LOST IN SPACE: COUNTDOWN TO DANGER and FIREBRAND: THE INITIATION OF NATALI PRESANO.


Launching into comic stores and online today, Volume Two of Lost in Space: Countdown to Danger tells all new thrilling backstories of the show’s favorite heroic characters, with a special focus on Parker Posey’s villainous ‘Dr. Smith’ and fan favorite ‘Robot.’ While, Season Two of Firebrand: The Initiation of Natali Presano, created by Jessica Chobot and Erika Lewis, continues the journey of a young witch who has come to Seattle to defend humanity against darkness, now available exclusively on Webtoon. Readers can download the official Webtoon app by visiting the Apple App Store and Google Play.


LOST IN SPACE: COUNTDOWN TO DANGER:

By Hank Rea June 13, 2019
Long overdue history in the making! Dynamite's two flagship heroines are teaming up in a new ongoing series starting in September, written by the multitalented and Eisner-winning Jordie Bellaire (Buffy The Vampire Slayer, Redlands) with art by Drew Moss (Star Wars).


The story starts in 1969, the genesis of Vampirella - timed perfectly with her 50th Anniversary now being celebrated in 2019. Vampi's new to Earth and still adapting to our world. She finds herself attracted to the supernatural and paranormal mysteries of the world. When suddenly she runs across a young Red Sonja, plucked out of time and clueless. The two women set forth on an adventure, collaborating as both detectives and warriors to find out what has happened... only for more space-time shenanigans to befall them! Do not expect any cliché misunderstanding fights, these two Women of Dynamite are working together, no holds barred.


Simon Says is a drama-filled, crime noir story that follows a former artist to the Führer who hunts down and seeks justice upon the Nazis he witnessed murder his friends and loved ones during the war. It is an original graphic novel inspired by true events and by a real-world Holocaust survivor, Simon Wiesenthal, an artist who lost his family and took justice into his own hands.
"Simon Says is about an innocent and gentleman, an artist, whose family and life are destroyed by a real-world event. Not something sci-fi or fanciful, but something that has happened and could happen again. In that way, it's the story of any of us, and how we would respond if who we were and what we had were lost,” said Frattino. "The real-life, famed Nazi hunter, Simon Wiesenthal, was quoted as once sayin…
Post a Comment
CONTINUE READING »