By Enrique Rea October 03, 2017
During late 2017 we've seen good (The Tick), bad (Inhumans), and so-so (The Defenders) superhero shows. By comparison, Fox's 'The Gifted' is a lot better than it should be. Having the benefit of premiering three days after ABC's much-maligned Inhumans, 'The Gifted' looks like a well-oiled machine by merely being competently produced. 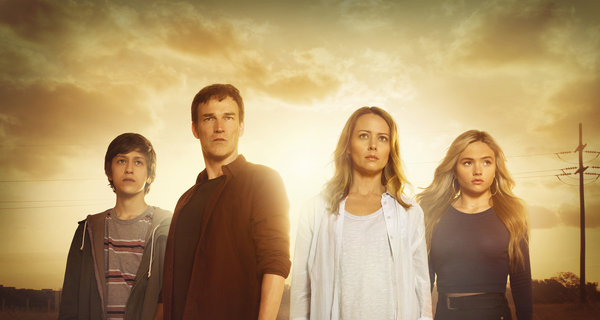 If you've ever picked up an X-Men comic book, watched an X-Men cartoon or film, the premise of 'The Gifted' will be easily accessible and familiar. In a world that fears and persecutes mutants, people with activated X-genes that ignite their special powers must hide to avoid capture by nefarious government agencies who arrest them "for their own safety." Such is the case for the Strucker kids, Lauren (Natalie Alyn Lind) and Andy (Percy Hynes White). Their powers become exposed during a high school dance where Andy predictably gets bullied into a rage unleashing his destructive abilities. Lauren uses her powers to get him out of there and the two have to explain what happened to their parents.

Reed (Stephen Moyer) just so happens to be a prosecutor of mutants so when a distraught Caitlin (Amy Acker) calls after the kids come out as mutants and the evil Sentinel Services come knocking at the door the chase is on. Reed uses his connections to contact Eclipse/Marcos Diaz (Sean Teale, playing a new character reminiscent of the comics' Sunspot) who leads a mutant underground group that includes John Proudstar/Thunderbird (Blair Redford), Clarice Fong/Blink (Jamie Chung), and Lorna Dane/Polaris (Emma Dumont) to help his family.

The pilot episode is fast-paced and slickly produced. It helps that Bryan Singer (X-Men, X2) directs and keeps Fox's rights to mutant lore alive and well. It's not as great or as imaginative as FX's 'Legion' but it doesn't have to be. It just has to be competent in its execution with a talented cast that is earnest and convincing. Acker and Moyer need more to do than just be a frazzled mother and stoic dad. They're capable of so much more it would be a shame to underuse their talents. Hopefully, the rest of the season will broaden their emotional range and dig deeper into the subtext of mutant prejudice.

'The Gifted' isn't breaking new ground in the superhero television genre but it is providing a worthwhile escape with familiar themes and circumstances. It's comfort food for fans who like what the X-Men universe has to offer. With an engaging cast, decent production values, a mix of practical and computer-generated effects, and a promising pilot, 'The Gifted' is off to the right start.

Catch new episodes every MON at 9/8c on FOX!

By Enrique Rea February 02, 2018
Bryan Hill pumps the brakes a little in the follow up to the fast-paced debut of 'Bonehead' with more great world building. The mystery surrounding Bonehead 56 deepens but we at least get some backstory and details about what his arrival means for a pair of brothers with opposing viewpoints.


BONEHEAD #2
Writer: Bryan Edward Hill Artist: Rhoald Marcellius, Sakti Yuwono Letterer: Jaka Ady Graphics: Comolo Editor: Elena Salcedo Publisher: Image Comics Release Date: January 31, 2018 Cover Price: $3.99
Score:★★★★☆ (4/5)
After a thrilling video game-like first issue, issue two gives way to the brothers Kray. Aleph is a tech scientist examining the unconscious "56" and marveling at his abilities. He reminds him when his brother Hideki roamed the city as the vigilante Blackdeath. Hideki is a Gladiator (cop) now and he questions Aleph's methods with 56 and its legalities. Nonetheless, they need 56 to be free on the streets for now so they can monitor him. The brothers c…
Post a Comment
CONTINUE READING »

By Enrique Rea January 26, 2018
Can a black woman be America's first superhero?


Eli Franklin is a 15-year-old girl living in rural Montana--and she just happens to be the most powerful person on the planet.

In the aftermath of the world learning that only black people have superpowers, Eli makes her debut as the superhero Good Girl, on a mission to help people and quell the fear of empowered blacks.

When a super-terrorist threatens to take away everything Eli has worked toward, will donning a patriotic costume be enough for her to find acceptance?

America's Sweetheart expands BLACK into a universe of heroes.

Based on characters created by Osajyefo and Tim Smith 3 from the world established in BLACK, the breakout comic book series by Osajyefo and Smith, …
Post a Comment
CONTINUE READING »