By Enrique Rea November 16, 2017
It's time for another showdown in Eden and this one cuts to the chase in the opening pages of 'Postal' #24. Bryan Hill wastes no time getting to the nitty-gritty of this long-anticipated confrontation between cult leader Isaac Shiffron and Eden mayor/estranged wife Laura Shiffron. 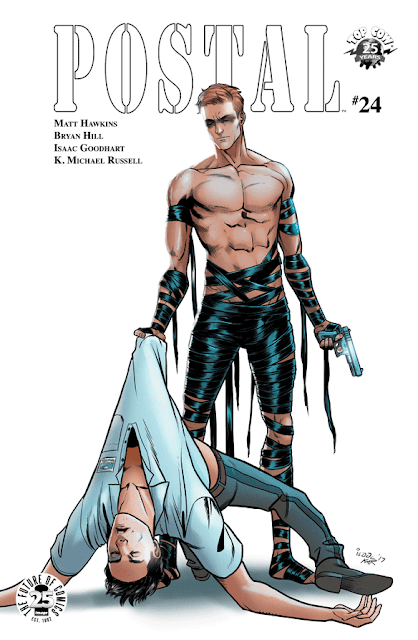 Isaac, Bremble, and some goons have infiltrated Eden taking Mark hostage leading to a face-to-face confrontation with Laura, Maggie, and Magnum. It's the showdown we've been waiting for, a buildup that was so anticipated that it could not live up to expectations. But before things are settled the story jumps back two hours to reveal how they all got to this point.

From the very beginning of 'Postal' there's been a huge dark cloud hanging over it. That cloud was the legacy and part mythical boogeyman known as Isaac Shiffron. The town he founded was stolen from him as he saw it and Laura embodied that betrayal along with harboring their son. Laura knew he'd be back someday while she was busy keeping Eden under the radar, a haven for shady characters, with the blessing of a leveraged FBI director. It wasn't always easy, plenty of outside forces helped to bring chaos to the town but through it all, Laura persevered. Mark is responsible for keeping his mother in check at times and providing a steady hand with his analytical mind. Now it was all up for grabs as Isaac stood in the middle of town with Mark at gunpoint and Bremble there to take down Laura and expose the town for what it is.

As usual, artist Isaac Goodhart provides clean pencil work that smooth efficient layouts that neatly propels the story from scene to scene. The backgrounds are very detailed adding a lot of depth especially in the forest where such work can be thankless but necessary. K. Michael Russell does beautiful work coveying moonlight with shades of blue. The pastels keep the tone subdued until the more explosive moments result in brighter bolder splashes of color.

'Postal' #24 is the climactic chapter in the long-standing struggle between Laura and Isaac Shiffron for the soul of Eden. The two finally clash but it's all too brief and conveniently resolved to create much of an impact. The usual focal point of the comic, Mark, becomes inconsequential in the end. More was expected of this promised confrontation and it was met with a whimper instead of a bang. It was all well executed and it looks great but the resolution left a lot to be desired.

By Enrique Rea December 01, 2015
We've seen Eugene's story. But during his last day's in Vietnam, he finally learns how Ha survived the war. She's always been much stronger than him; and much stronger than he's given her credit for. With all their secrets gone, Ha and Eugene must decide how to move forward.
Post a Comment
CONTINUE READING »

By Enrique Rea May 29, 2017
'Redneck' arrived a month ago redefining the vampire genre by not giving into convention or cliché. In fact, if you've read the first two issues, the vampire angle serves more as subtext than its selling point. It's the perfect approach to this character-driven southern fried drama that simmers with tension and intrigue.

REDNECK #2 STORY: DONNY CATES
ART/COVER: LISANDRO ESTHERREN & DEE CUNNIFFE LETTERER: JOE SABINO
RELEASE DATE: MAY 24
32 PAGES | Full Color | Mature | $3.99
★★★★☆ (4/5)
The Bowman's way of life just got upended and what was once a peaceful and secluded existence is on the verge of war. The vampires of Texas keep to themselves, raise their cattle, drink its blood and sell the meat through their BBQ joint. Seems like a brilliant front to keep them in the shadows while staking out a living. All that is threatened when one of their own is killed after a night on the town. This issues fills in the holes to what might have happened and what the hell is…
Post a Comment
CONTINUE READING »

By Enrique Rea June 05, 2018
The story of Aphrodite is the focus of 'Cyber Force' #3. This compelling chapter continues to build the new world of Top Cow's reimagined original title. Corporate greed leads to murder and coercion until one doctor's obsession results in a powerful revelation.


CYBER FORCE #3
Writer: Matt Hawkins, Bryan Hill Artist: Atilio Rojo Letterer: Troy Peteri Editor: Elena Salcedo Publisher: Image Comics Release Date: May 30, 2018 Cover Price: $3.99
Score: ★★★★1/2 (4.5/5)
Marc Silvestri released 'Cyber Force' twenty-six years ago and this second reboot of the former flagship series rests in the hands of writers Bryan Hill and Matt Hawkins. It was only a matter of time before we'd get the whereabouts of the sentient android Aphrodite. Hill and Hawkins dedicate this issue to her story, and it's probably the best in the series so far. We get very little Carin and Morgan in order to give what is essentially an unnerving scientific horror story.
Cyber Data is the or…
Post a Comment
CONTINUE READING »

PREVIEW: 'Hack/Slash vs. Vampirella: The Heart Is A Lonely Killer' TPB by Shawn Aldridge and Rapha Lobosco

By Enrique Rea June 05, 2018
The Vegas strip heats up as Cassie Hack and her companion Vlad are on the trail of a deadly slasher and meet the lovely, yet lethal Vampirella. The team-up event you’ve been waiting for is a high stakes game of chance when they have to take on The Queen of Hearts!