On the run, in love-all Amalia and Randy need is each other...until Los Queridos begin experimenting with new ways to murder their rivals. Now, a new path must be forged. 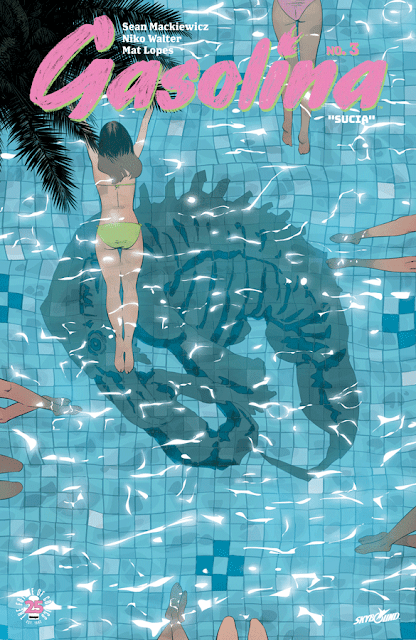 Score: ★★★★1/2 (4.5/5)
As we expected Gasolina #3 turns up the heat with a lot of explosive action with Mal and Randy on the run from the cartel only to be caught off guard. The dialogue of the two is simply mesmerizing and brilliant as they discuss their motives and the possibility of introducing two new characters. But as things go, it is shortlived when they are separated by the Los Queridos.

The art by Niko Walter and Mat Lopes has also exploded with the writing. The contrast between characters amid a dark background marked by only primary colors makes for an intense visual. The creepy compositions like when Mal and Randy step up at the truck near the burning farmhouse illuminate the faces in grim and haunting ways. The burning embers in an orangey glow are particularly striking and impressive.

Mackiewicz and Walter expand the scope of the story as Los Queridos come between Mal and Randy while harboring slaves and weird beetles you have to see to believe. 'Gasolina' has picked up the pace into one thrilling crime drama. It's time to get on board this series just as things are heating up.