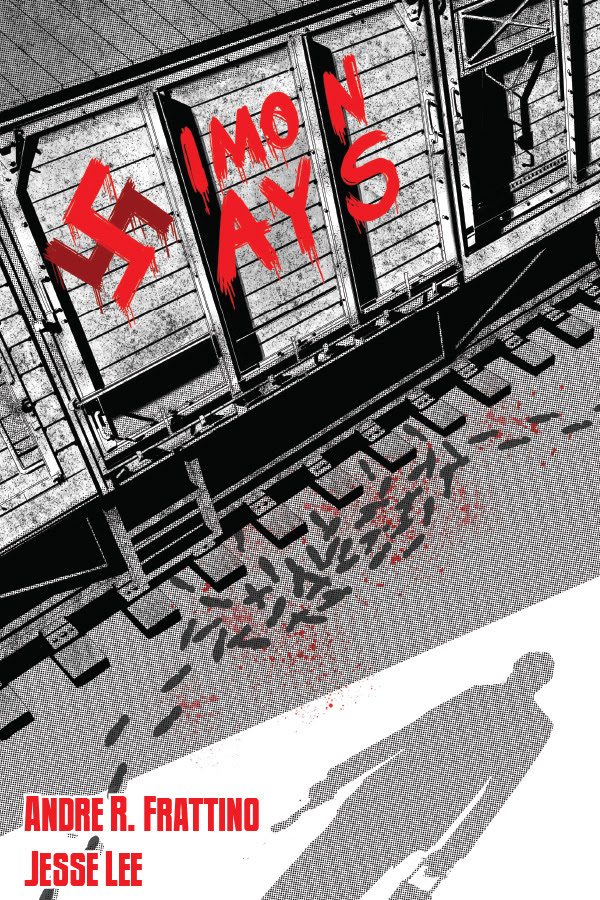 Simon Says is a drama-filled, crime noir story that follows a former artist to the Führer who hunts down and seeks justice upon the Nazis he witnessed murder his friends and loved ones during the war. It is an original graphic novel inspired by true events and by a real-world Holocaust survivor, Simon Wiesenthal, an artist who lost his family and took justice into his own hands.

"Simon Says is about an innocent and gentleman, an artist, whose family and life are destroyed by a real-world event. Not something sci-fi or fanciful, but something that has happened and could happen again. In that way, it's the story of any of us, and how we would respond if who we were and what we had were lost,” said Frattino. "The real-life, famed Nazi hunter, Simon Wiesenthal, was quoted as once saying: ‘For evil to flourish, it only requires good men to do nothing.’ This is a story of a good man doing something.”

Showcasing gritty, starkly black and white panels with pops of red, Simon Says features the same ominous storytelling and nuanced characters of bestsellers like Alan Moore and David Lloyd’s V for Vendetta and Heather Morris’ The Tattooist of Auschwitz.

By Hank Rea September 22, 2016
The wacky world of Fox's Gotham has long embraced its brand of crazy. "Anything goes," seems to be the motto as the show has tried to fill in the blanks of a pre-Batman Gotham City. Besides making the future Commissioner Gordon an erratic hot-head, his future wife a sociopath, and brought back a villain from the dead, the latest stunt involves aging-up a teen Ivy Pepper magically into an adult to use her powers as a seductress.
Executive producer Ken Woodruff explained this creepy premise to THR: We made the change for two reasons: The character Ivy in the comics, one of her greatest powers is the power of seduction. Everyone was much more comfortable with that with an older actress as opposed to a teenager. We want to explore that classic, canonical power of Ivy. And we didn't just make her older with that attack. When she's changed and transformed, there's a real character change as well. She'll still have some of the same traits, but she'll be much d…
Post a Comment
CONTINUE READING »

“How does a nation struggling with a history of racial inequality cope in a world where only black people have superpowers?” said Kwanza Osajyefo. “Our story asks: In a time of supposed inclusion and diversity, how far will those in charge push back to retain the status quo?”

In WHITE, Theodore Mann, whose family exploited empowered blacks for centuries, is now President of the United States. Mann’s administration has exacted controversial measures to deal with the empowered he’s deemed terrorists and is stoking national tensions to win public support for Mann First, a cybernetically-augmented soldier program. The main person standing in the President’s …
Post a Comment
CONTINUE READING »