In a future where clairvoyant Augurs are used for their powers but feared, held captive, and persecuted, a disaffected military major is shocked into action by the grim realities of the Augurs' treatment. She puts her life and career on the line to help them attempt a daring escape from captivity. 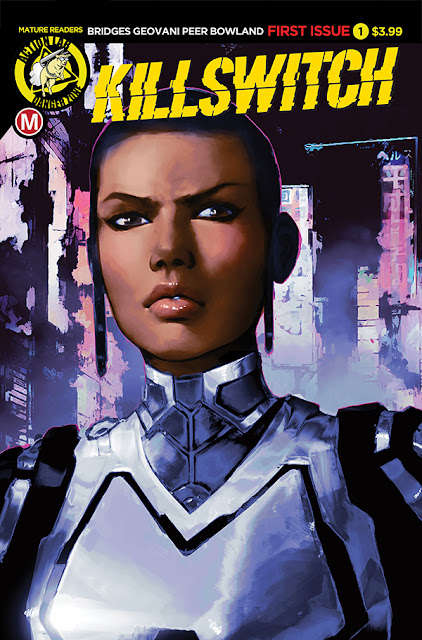 
'Killswitch' #1 is the kind of debut that reminds one of the dramatic slow burns of sci-fi shows like 'Battlestar Galactica,' 'Star Trek,' and 'Babylon 5.' Writers Jeffrey & Susan Bridge create a familiar future-world where people with pre-cognitive powers are misunderstood, mistreated, and used for their foreknowledge even at the cost of their lives. These "augurs" as they're called represent the second class citizens that are disenfranchised and enslaved by a militaristic society.

Major Marcella Regula is loyal, committed, and dutiful. So dutiful she turned in her own brother as an augur. Even so, she's revered across the universe. She and her troops have to oversee a group of augurs for the latest set of testing. She's never spent a lot of time among augurs so this is an eye-opening experience for the Major.

As we well know, prejudice breeds from ignorance and irrational fear of others. 'Killswitch' covers themes like this as well as a seemingly fascist system of governance. These are the type of plot points some of the best science fiction has tackled and the Bridges do a good job of establishing this dystopian world with a very simple and straightforward approach. While it seems mostly uneventful for a first issue, it ends with a turn that should lead to a lot more intrigue and action.

Walter Geovani's art lays out a great expansive landscape that is clearly futuristic and advanced. Yet, the smaller scenes between characters feels intimate and emotional.  Expressive faces convey a lot of emotions and Geovani adds the weight the script requires. Brittany Peer's colors give it all a very bright and colorful sheen that is uncommon for most sci-fi fare. We're used to dark corridors and cold silver surroundings in a futuristic facility but it's a nice change of pace that Peer enlivens the pages with more welcoming hues.

'Killswitch' #1 is well executed and could be a gripping sci-fi comic. The first issue is merely an introduction to this world and it's an intriguing one despite the use of some familiar tropes. It does enough to pique your interest in issue two where more will have to happen and Major's sudden change of heart is further explored. 'Killswitch' should be on your radar.