The Four Horsewomen have been unleashed and things are getting apocalyptic in this exclusive first look at Wonder Woman #755. 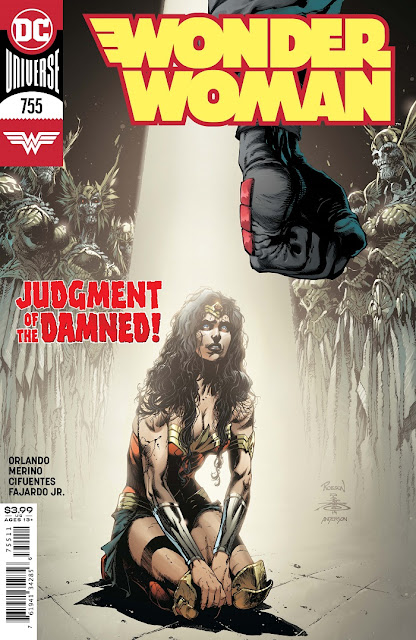 Wonder Woman #755
by Steve Orlando, Jesus Merino,
Vicente Cifuentes and Romulo Fajardo Jr.
is in stores and available digitally on Tuesday, May 19.

Within DC’s top ranks, there’s no one more reverent than Diana of Themyscira. With a god for a father and superpowers bestowed by Olympian deities, Wonder Woman knows to respect prophecies, especially when they’re about the end of the world.

And with so many of Diana’s enemies determined to bring about Armageddon, they hardly need a prophecy to help them.

All of this is what makes Paula Von Gunther’s recent accomplishments so alarming. Warmaster has successfully assembled all four horsewomen—legendary heralds that will bring about Themyscira’s destruction if Wonder Woman isn’t able to stop them. But that may be hard as Diana has her own problems. It appears the Amazons may not have always been truthful, and now Wonder Woman must stand on trial for their deceit.

Next week’s Wonder Woman #755 officially kicks off “The Four Horsewoman,” the climactic storyline that writer Steve Orlando has been building to since he first took the reins of the Amazon princess’s ongoing book. Diana’s recently been questioning some of her past choices and seemed possibly interested in repairing things with Steve Trevor…though we suspect that will have to wait now that the horsewomen are on the prowl. Will Hell follow with them? Perhaps our preview of this must-read new issue will give you your first hints….